After Ott Tanak suffered a puncture on the morning’s final leg that cost him his commanding 32.9-second lead, Hyundai’s returning Dani Sordo had led his home event.

But Sordo lost out to Latvala on the first use of Savalia – after the morning’s run was cancelled due to badly placed spectators. Compounding his woes, on SS13 he was slowest of the WRC field and so dropped to sixth.

That allowed a consistent Latvala, who has not won in the WRC since Sweden last season, to steal a 4.7s march, despite what he considered to be a poor performance on the reversed El Montmell stage.

As Tanak admitted that his title hopes were over, Sebastien Ogier climbed from fifth to second as he hunts down championship leader Thierry Neuville.

However, the M-Sport driver still lamented lost time on SS13. It began in dry conditions, allowing Neuville on soft tyres to set the fastest time - although Ogier, on wet tyres, was only 0.9s off the benchmark,

He said: "It has been a difficult afternoon unfortunately. It is a team sport, we all work together, but we trusted our [meteorologist] and there was no rain all afternoon.”

After his leg had ended, wet weather moved in. That meant Sebastien Loeb was unable to take advantage of the extra grip available from his soft tyres and so fell behind Ogier.

Conditions continued to deteriorate, however, for those behind him, and the nine-time WRC champion hangs on to a potential podium by 1.3s ahead of Elfyn Evans.

Neuville lies fifth, ahead of Sordo and Esapekka Lappi who suffered a high-speed, sixth gear spin also on SS13.

Citroen’s Craig Breen – who reckoned he had “the most horrible stage I’ve ever driven in my life” during the morning – and Tanak are eighth and ninth.

Gearshift issues for Eric Camilli on SS11 look set to deny the Volkswagen Polo GTI R5 a WRC2 victory on its maiden competitive event, as Skoda Fabia driver Kalle Rovanpera moved to top of the class. 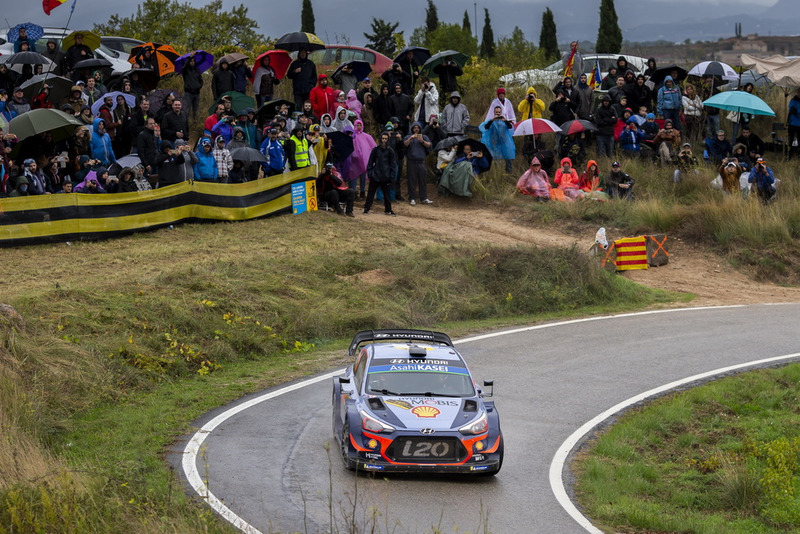 Sebastien Ogier will pilot Toyota’s third World Rally Championship entry for the final two rounds of the season in Spain and Japan.

The Acropolis Rally is renowned as one of the World Rally Championship’s true test of attrition. Last weekend’s Greek classic served up another slog for survival that delivered the most unexpected of results. Motorsport.com reviews the highs, lows, turning points, close calls and heartbreak from a highly attritional Acropolis.