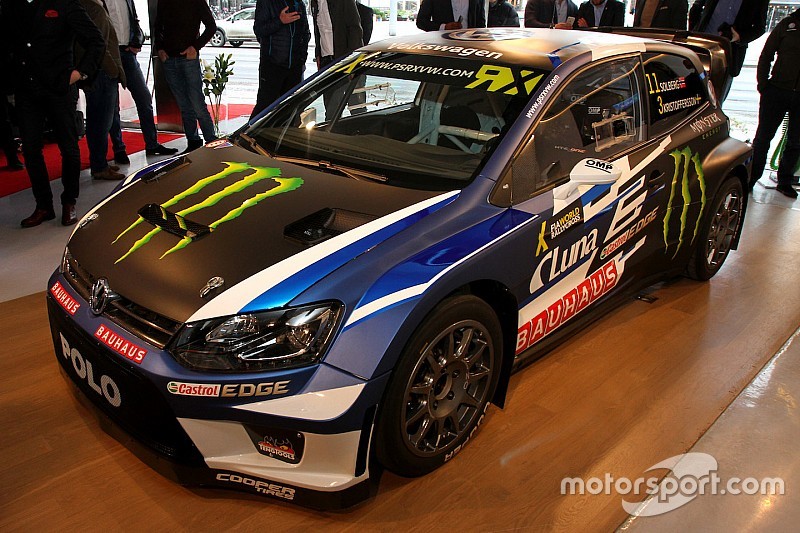 Solberg and new team mate Johan Kristoffersson were joined by members of the new team at the launch, an amalgamation of the Norwegian’s double-title winning privately-run PSRX outfit and Volkswagen Motorsport.

The new World RX Polo is based on Volkswagen Motorsport’s dominant World Rally Championship title-winning Polo and has been built at the German outfits Hannover base, with adaptions to hone it for rallycross competition.

“We are really pumped up to do this, it’s very exciting,” said Solberg. “It’s been a lot of work. It looks nice here now and everything, but all of the team are flat out back in Hannover working on the car and it’s nice to see that really big passion.

"I have had a lot of opportunities to do different sports or with other teams in rallycross but I’m a stubborn guy you know; I really want to be a part of this myself. We’re happy with the aggressive styling of the car, we need to scare the other competitors too,” he joked.

Kristoffersson finished second in the World RX drivers championship last season, and has worked with Solberg on every test session this winter, on a number of the European-based World RX circuits.

“To be in one of the top spots in the Volkswagen Group as a race car driver – I’m very proud to be here,” said Kristoffersson. “I’m really looking forward to being team mate to Petter. So far we have been working very well as team mates in testing. The co-operation between us is very good.”

Fabrice van Ertvelde is the project manager for Volkswagen in the World Rallycross Championship and will also be Solberg’s race engineer on events, while Solberg’s wife, Pernilla, will continue to be Team Principal and Solberg’s spotter.

The pair worked together in the Subaru WRC team and Solberg’s own private WRC team previously.

Demaison confirmed that the new Polo will share engine technology with the Germany outfit's successful rally programme, and GRC Beetle.

“This is three and a half months of work so it’s not a revolution. We started with a well-known WRC car from 2014, so this is a rally car that we’ve adapted to rallycross rules,” said Demaison.

“The transmission and cooling are very specific for rallycross and we’ve used an engine we’ve developed for the GRC. This has been a big effort.”

“Everybody is pushing hard. We’ve seen that our competitors are not sitting still and we’re really looking to Barcelona,” said Smeets.

“We hope we have a car that can win and at the end of the year we hope we can be pushing for some titles and have a fantastic season.”