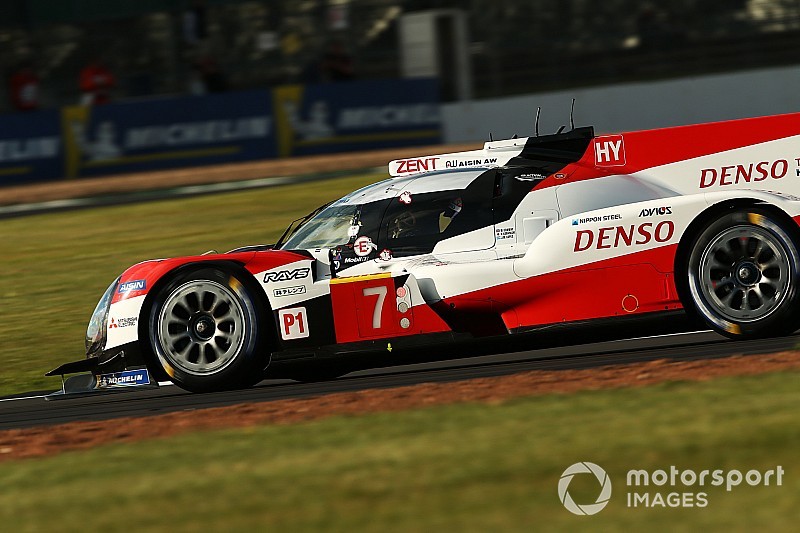 Toyota saw off its privateer LMP1 opposition to sweep the front row of the grid for this weekend's Silverstone FIA World Endurance Championship curtain-raiser.

Kamui Kobayashi and Mike Conway posted an average time of 1m36.015s in the #7 Toyota TS050 Hybrid during Saturday's 20-minute qualifying session, beating the sister #8 car driven by Sebastien Buemi and Kazuki Nakajima by exactly three tenths of a second.

The best of the privateers was the #1 Rebellion R-13 a further two tenths back in the hands of Bruno Senna and Gustavo Menezes.

Conway paid credit to the Toyota team after qualifying, revealing that the car had been rebuilt a new monocoque overnight.

The car he and Kobayashi share with Jose Maria Lopez was found to have sustained chassis damage after the Japanese driver spun across the kerbs at Becketts as the result of minor contact with one of the Rebellions in second practice.

"Thanks to the team for their work overnight," said Conway. "All in all it was a decent lap from me and then a great lap from Kamui to secure the pole."

Menezes set the fastest time by a privateer with the 1m36.521s, which shaded Senna's best by just seven hundredths.

They ended up on a 1m36.560s average, which was half a second quicker than the 1m37.024s from team-mates Nathanael Berthon and Pipo Derani in the sister Rebellion.

The two Ginetta G60-LT-P1s ended up fifth and sixth. Mike Simpson and Oliver Jarvis were only two tenths behind the second Rebellion with a 1m37.220s average in the #6 car.

Their 1m40.948s average put them seven tenths up on United Autosports Oreca drivers Paul di Resta and Phil Hanson, while the Jackie Chan DC Racing Oreca qualified by Will Stevens and Gabriel Aubry was the first Goodyear runner in third place.

Ferrari blocked out the top two positions in GTE Pro, James Calado and Alessandro Pier Guidi taking the pole from team-mates Davide Rigon and Miguel Molina by a shade over a tenth.

Calado was just behind Molina after the first runs before Pier Guidi set the fastest lap of the GTE session, which gave them a 1m54.171s average in their AF Corse Ferrari 488 GTE Evo. That compared with Rigon and Molina's 1m54.302s.

Alex Lynn and and Maxime Martin took third for Aston Martin with a 1m54.992s average in their Vantage GTE.

Gianmaria Bruni, who had a spin at Abbey halfway through the session as the result of a puncture, and Richard Lietz took fourth in the second-generation Porsche 911 RSR on 1m55.067s.

Reigning champions Kevin Estre and Michael Christensen brought up the rear of the six-car GTE Pro field in their Porsche behind the second of the Astons.

The #57 Project 1 Porsche did not take part in qualifying after a suffering an apparent engine issue in third practice earlier in the day.