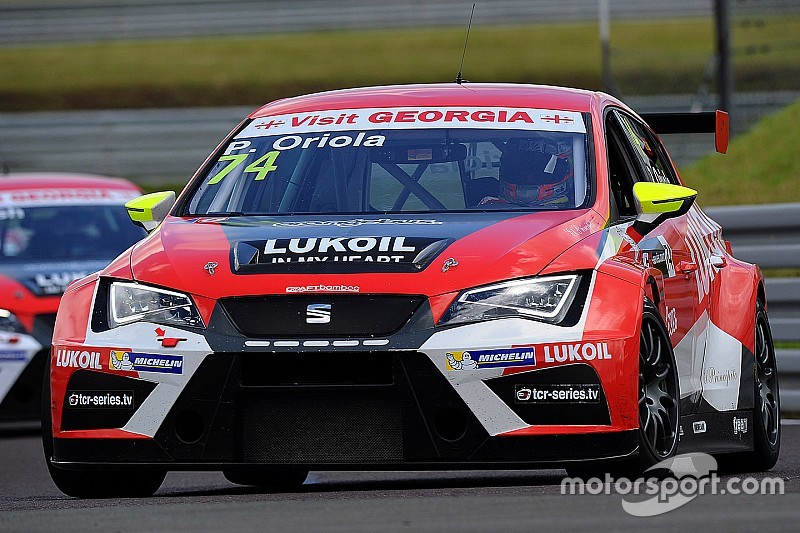 2015 TCR runner-up Pepe Oriola was victorious in the second race at Oschersleben after an opening lap overtake on pole-sitter Davit Kajaia.

Kajaia had a better launch off the line than Oriola, the Spaniard narrowly holding on to second despite receiving a nudge from Antti Buri and having to take the opening chicane sideways.

Oriola then passed Kajaia before the end of the opening lap.

Behind the duo, Dusan Borkovic dived down the inside of Jean-Karl Vernay for third but the latter made contact, causing both of them to lose momentum and let Mato Homola sneak past.

Lap 2 saw drama for Nash, who was first passed by Borkovic then ran slightly wide, dropping behind teammate Afanasyev as well.

However, Afanasyev could only keep the counterattacking Briton behind for two laps before he reclaimed fourth.

Oriola led by around two seconds after five laps and his advantage was stretched even further when Borkovic started to put pressure on Kajaia for second.

While his first attempt resulted in the Serbian slightly running wide, he took advantage of a small Kajaia error at Turn 1 to get past.

The Georgian driver overshot the first corner even more a couple of laps later, causing him to drop as low as 11th.

Borkovic started to close in on Oriola but failed to narrow the gap close enough for an overtaking attempt as the Spaniard took the flag first.

Stefano Comini salvaged sixth from 15th on the grid despite having to stop behind the spinning Gianni Morbidelli on the opening lap.