After qualifying only eighth, Baguette and Koudai Tsukakoshi were able to recover to fourth place during Sunday’s penultimate round of the season in their #17 Honda NSX-GT to cut the deficit to points leader Naoki Yamamoto - who failed to score - to eight points.

It means Baguette and Tsukakoshi head to this month’s Fuji Speedway finale with a chance to claim the title if they can win the race, with the Team Kunimitsu Honda of Yamamoto and Tadasuke Makino finishing third or lower.

The Real Racing car almost didn’t make the grid at all at Motegi after Baguette was rear-ended by the NILZZ Racing Nissan GT300 during the morning warm-up session, causing significant rear-end damage to the Astemo-liveried #17 machine.

However, a rapid repair using a spare rear bodywork section donated by fellow Honda team Mugen allowed Baguette to take the start and move up to sixth position in his stint. 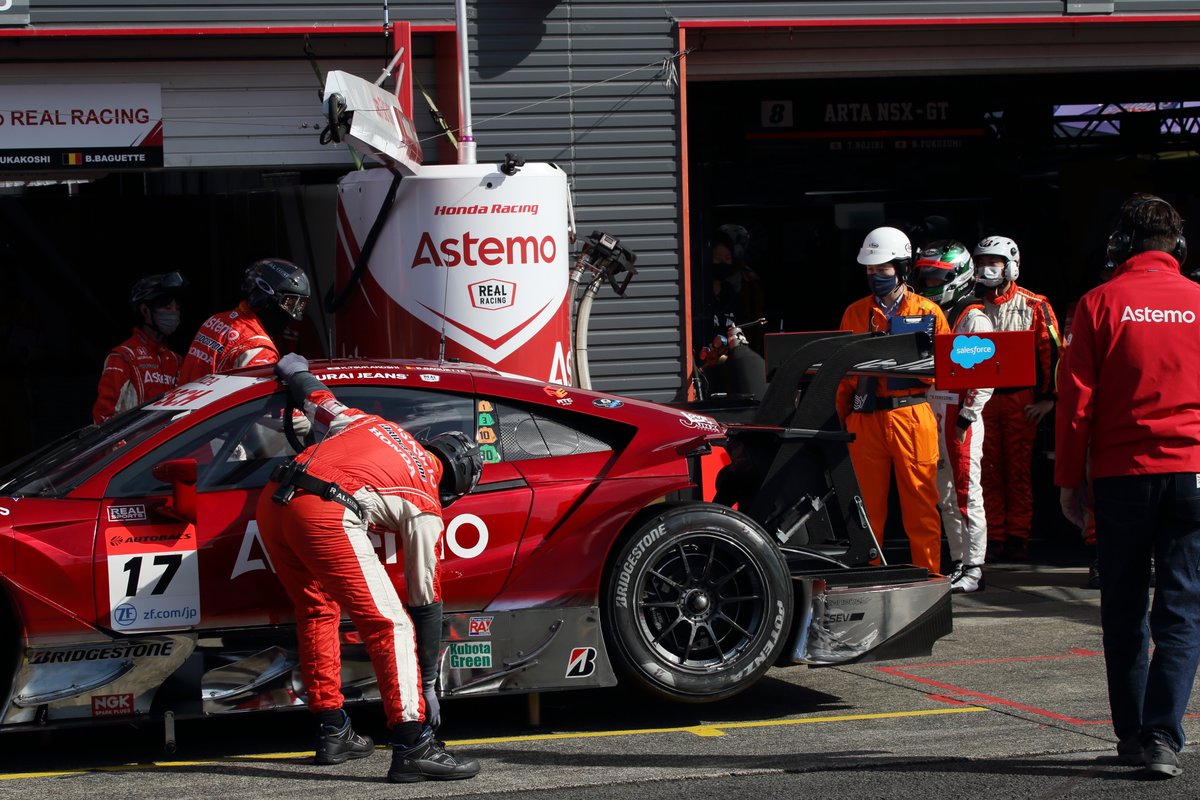 Tsukakoshi then made further progress to bring home the car in fourth, passing both the Rookie Racing Toyota of Kazuya Oshima and Mugen Honda of Toshiki Oyu late on.

“I made a good start and I knew this time I had to be aggressive because we were on a hard tyre and my tyre warm-up was quite slow,” Baguette told Motorsport.com.

“I dived up the inside of Ronnie [Quintarelli in the #23 Nissan] at Turn 3 and that gave me a gap behind, and I could warm up my tyres easily. Koudai did a really good job as well, he struggled also with the warm-up but we had really good race pace.

“Finally for once they used the full-course yellow [instead of the safety car] and that really played in our favour, I could keep the gap to the cars behind and we did a good pitstop like we always do. Koudai could also warm up the tyre without losing so many positions.

“When you look at our starting position, P4 is not bad, and we are still in the game for the championship. It will be a great fight between all the Bridgestone Hondas, and we’ll do our best to be in front.”

ARTA Honda pair Tomoki Nojiri and Nirei Fukuzumi have taken over as Yamamoto’s nearest challengers in the points standings following their second win in as many races.

Baguette admits the momentum is with the ARTA squad but pointed to Real Racing’s success at Fuji in both 2020 and this year’s 500km race in May as evidence that it can head into the season finale confident of putting on a good showing.

“They are fast, they have found something good on the set-up and they look like they are full of confidence since the last few races,” said the Belgian of Nojiri and Fukuzumi. “It won’t be easy, the #8 [ARTA car] is very fast, and the #1 [Kunimitsu Honda] will finally have no ballast.

“We won at Fuji last year, and in Round 2 this year, even though we were for sure lucky, and since then we have found a lot more things that work on the set-up and we are generally much more competitive. I feel pretty confident, I think we will be there to fight.

“We have to be smarter on tyre strategy, but we are fast. We have been fast in every track, so if we choose the right tyre at the right moment, we’ll be there.”