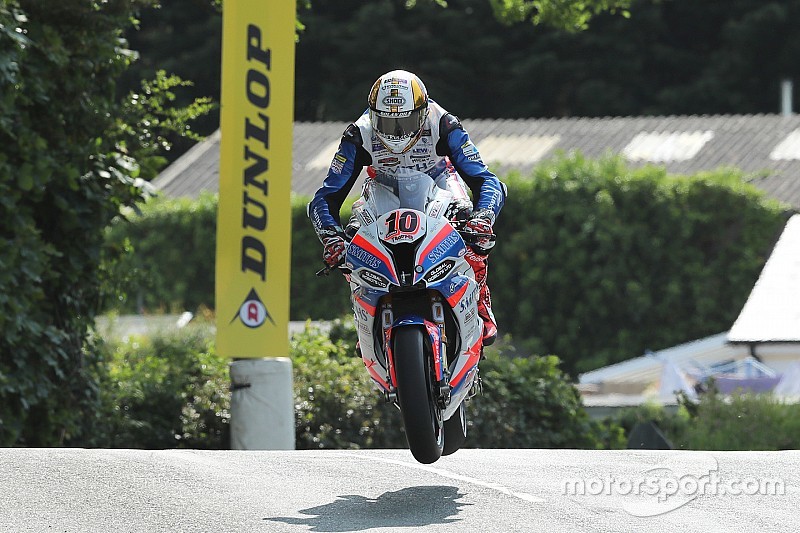 Peter Hickman beat Dean Harrison in the opening Isle of Man TT Superbike race, which was red-flagged on the third lap for an incident.

Delays to the practice week schedule due to bad weather forced the SBK race to be postponed from Saturday to Monday, with a reduced distance of four laps. However, only two of those were completed before an incident at Snugborough early in the lap brought out a red flag. The result was soon declared.

Harrison led Hickman by 1.2 seconds on the run to Glen Helen on the opening lap, with the Silicone Engineering Kawasaki rider extending his advantage to 1.5s as they headed over the mountain section.Hickman, racing a hybrid Superstock/SBK having endured several issues during practice on his Smith Racing BMW S1000RR.

The outright TT lap record holder reduced Harrison's lead to one second at the end of the opening tour, but 1.5s would split the pair again at Glen Helen, before Harrison opened up an advantage of 4.8s at Ballaugh. Hickman dug deep on the run up the mountain, and was just 0.045s behind Harrison at the Bungalow.

He led into the pit stop phase by 1.7s, though lost a second to Harrison. The red flag was flown shortly afterwards, with Hickman guiding the new S1000RR to his third TT win by 1.7s on corrected time.

Practice pacesetter Harrison held onto second, with home hero Conor Cummins completing the podium on his Padgetts Racing Honda. James Hiller ran third early on the first lap on the Bournemouth Kawasaki, but faded dramatically by the second lap and was 41s off the lead in fourth.

John McGuinness's TT return ended on the opening lap, when he was forced to pull into pit lane when his Norton developed a technical issue. Lee Johnston (Ashcourt Racing) also retired.