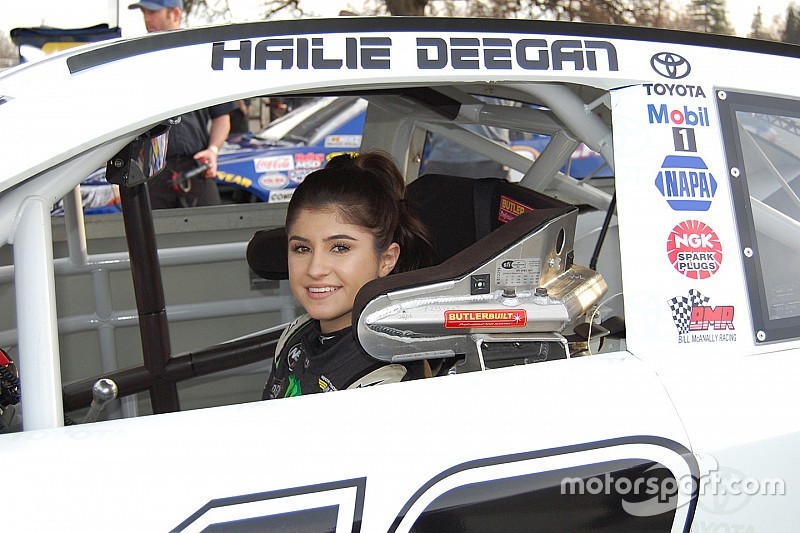 After competing in the K&N West opener at Kern County Raceway, Harvick named the 16-year-old NASCAR Next driver when asked which driver impressed him the most during the race.

“If I had to pick one person to say, alright, that’s the person KHI would want to represent and has the most potential, it would probably be Hailie Deegan," he said. "She did really, really well.

“I got to race with her a little bit there at the end of the race. She did a great job in the car. I think as far as potential and reach and racing knowledge and getting in the car as young as she is, that would be the one I would pluck out of the series and say that’s the one we want to be a part of. Because she has a lot of potential and already has some racing experience in multiple vehicles. That was fun to see.”

Deegan competed in the 2018 season opener for both the East and West divisions, finishing seventh at Kern County Raceway and 29th at New Smyrna after electrical gremlins ended her race prematurely.

This week, she joined Harvick on his Sirius XM NASCAR radio show, "Happy Hours." When asked where she looks to for advice, it should be no surprise that she named her father, Brian Deegan.

"Honestly, my dad. He has lived through the whole racing world. He knows the bad, the good; what happens and what comes with the bad. He knows the outcome of everything and I think that having his experience has definitely fast-tracked me in the knowledge that I have now."

Along with being a Global Rallycross race winner, the elder Deegan is also one of the most decorated Freestyle Motocross riders in X-Games history. Beyond that, he has captured multiple championships in the Lucas Off Road Racing Series.

With the departure of Danica Patrick from NASCAR competition, Hailie believes there are still more barriers that need and can be broken down for women trying to rise through the ranks of stock car racing.

"If you think of racing and you think of girls in racing, you automatically think of Danica (Patrick). There's no other girl that's made it (to) as high of a level as she has broken down barriers, but I think there's a lot more barriers that need to be broken for another girl coming in and that can be broken."