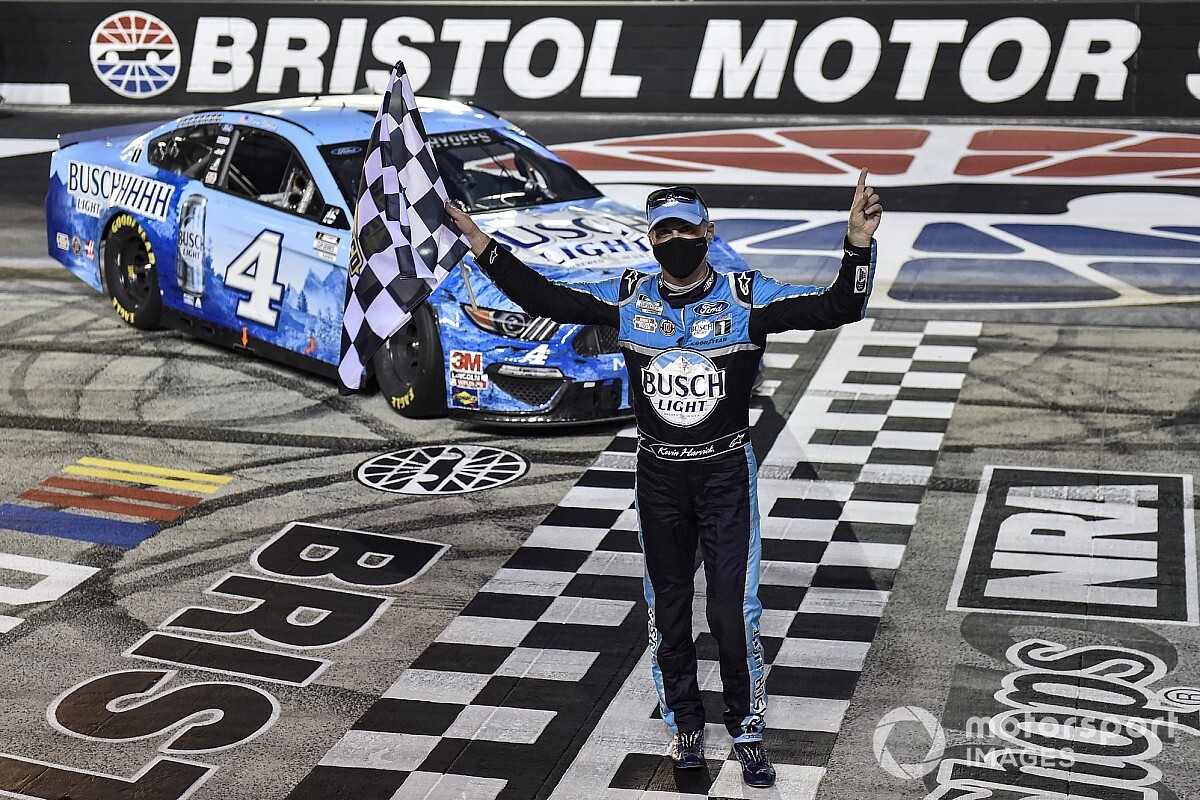 Kevin Harvick held off a determined Kyle Busch to earn his second victory of the NASCAR Cup Series playoffs.

Over the final 50 of 500 laps, Harvick and Busch played a game of cat-and-mouse for the lead. Busch used lapped traffic to grab the lead on Lap 459 only to see Harvick reclaim the top spot with 31 laps to go, using Joey Logano’s lapped car as a pick.

Harvick ended up taking the checkered flag by .310 seconds to claim his second win of the 2020 playoffs and career-best ninth of the season. The win is also the 58th of his career.

“To beat Kyle Busch at Bristol, I kind of got myself in a little bit of a ringer there. I hit a lapped car and got a hole in the right-front nose, but just kept fighting," Harvick said. "We don’t have anything else to lose. We were here to try to win a race. I know how much Rodney (Childers, crew chief) really enjoys coming here and, hell, how can you not enjoy coming here with all this enthusiasm.  Everybody is tired of being at home.

"I’m so happy to see all these fans in the grandstands. I was so jacked up when I got in this race car tonight to come here and just race and to be able to do that in front of people, that’s the enthusiasm that you get is from the crowd and I’m so excited for our team. The guys are just doing a great job.”

Asked if there was any way to describe this season, Harvick said: “There is not.  It’s just been a weird a year, but it’s been an unbelievable year on the race track."

Both Harvick and Busch advance to the Round of 12 of the playoffs but Busch – the reigning series champion – remains winless on the season.

Following the break between Stages 2 and 3, some lead-lap cars pit but Kyle Busch was among those who stayed out and continued to lead the way on the restart on Lap 261.

On Lap 280, Harvick went to the outside of Kyle Busch off Turn 2 and came away with the lead. Elliott ran third.

Bowman hit pit road on Lap 301 for a green-flag stop after reporting a significant vibration.

On Lap 308, Keselowski was black-flagged by NASCAR for not meeting minimum speed and was given one chance to correct the problem. Keselowski took his No. 2 Ford to the garage.

With 180 laps remaining in the race, Harvick’s lead over Kyle Busch reached 1-second as Elliott remained in third, 4 seconds behind the leader.

On Lap 326, Kurt Busch hit pit road for a green-flag stop after complaining of an increasing vibration. Busch came back to the track in 26th and three laps down.

With 150 laps to go, Harvick maintained a 2-second lead over Kyle Busch while Elliott remained in third more than 6 seconds back.

Ryan Blaney made a green-flag stop on Lap 356 after he had been falling through the field and said he believed his left-front tire “was coming apart.”

Logano on Lap 371 became the first car on the lead-lap to make their scheduled green-flag stop to take on new tires and fuel to make it to the finish of the race.

With 100 laps remaining in the race, Harvick had expanded his lead to 6.3 seconds over Elliott but both still had to make a final pit stop.

On Lap 407 as Harvick was preparing to make a green-flag stop, Austin Dillon got into James Davison in an incident that also collected Reed Sorenson to bring out a caution.

Harvick was the first off pit road of the six cars remaining on the lead lap. On the restart on Lap 419, he was followed by Bowyer, Jones and Kyle Busch.

Kyle Busch quickly powered back into the runner-up spot shortly after the restart.

With 60 laps to go, Harvick maintained a small but steady lead over Kyle Busch with Jones in third.

While both drivers battled in lapped traffic, Kyle Busch reclaimed the lead on the backstretch on Lap 459.

Using Logano’s car as a pick, Harvick powered around Kyle Busch to reclaim the lead with 31 laps remaining.

Kyle Busch secured the Stage 2 win over Harvick thanks to a caution with one lap remaining in the stage. Ryan Newman spun off Turn 2 but managed to stay off the wall.

Elliott was third, Logano fourth and Kurt Busch rounded out the top-five.

Following the break between Stages 1 and 2, the lead-lap cars all pit with Kyle Busch the first off pit road.

On the restart on Lap 137, Kyle Busch led the way followed by Bowman and Elliott.

With 85 laps remaining in the second stage, Kyle Busch remained out front but was being challenged by Elliott for the lead. Harvick ran third.

On Lap 186, Matt DiBenedetto made a green-flag pit stop for a loose wheel, which left him running 29th and three laps down when he returned to the track.

With 55 laps to go in the stage, Kyle Busch remained out front with half-second lead over Elliott.

On Lap 212, Truex went down a lap and immediately headed to pit road for a green-flag stop for what he thought was “a tire coming apart.”

It appears Hamlin got into the back of Truex as Truex was coming back on the track following his stop, which did significant damage to the nose of Hamlin’s No. 11 Toyota.

With under 25 laps to go in the stage, Harvick moved into the second spot as Elliott dropped to third.

On Lap 231, William Byron made contact with rear of Bell’s No. 95 Toyota while trying to avoid the car of Joey Gase. Byron suffered terminal damage to his radiator. That was the end of Byron’s race and will not advance to the Round of 12 in the playoffs.

During the caution, the lead-lap cars pit with Kyle Busch the first off pit road. On the restart on Lap 242, Kyle Busch led the way followed by Logano and Kurt Busch.

Harvick quickly moved into the second spot on the restart and Elliott moved into third as Logano dropped to fourth.

Elliott held off a furious charge from Kyle Busch, who started from the rear of the field, to earn the Stage 1 win – his third consecutive stage victory.

Harvick was third, Bowman fourth and Christopher Bell rounded out the top-five.

Keselowski started on the pole and led the first 17 laps until Harvick got around him to take the lead on Lap 18.

On Lap 27, Ricky Stenhouse Jr. wrecked off Turn 2 after contact from Johnson which brought out a caution. The caution also served as NASCAR’s planned competition caution.

DiBenedetto was the first off pit road thanks to a two-tire stop. Newman was penalized for speeding on pit road and had to restart from the rear of the field.

On the restart on Lap 41, DiBenedetto was followed by Reddick and Harvick.

Keselowski powered around DiBenedetto off Turn 2 on Lap 43 to retake the lead.

With 50 laps remaining in the first stage, Keselowski opened up a more than 2.5-second lead over DiBenedetto with Logano in third.

On Lap 96, Elliott moved into the runner-up spot and began closing on Keselowski.

Elliott got around Keselowski on Lap 107 to take the lead in the race for the first time while Kyle Busch moved to third.

Busch took over the second spot with 15 laps to go in the stage.

Six drivers had to start the race from the rear of the field – Kyle Busch, Hamlin and Jones for twice failing pre-race inspection, Corey LaJoie and Bubba Wallace for unapproved adjustments and J.J. Yeley for a driver change in the No. 15 car.