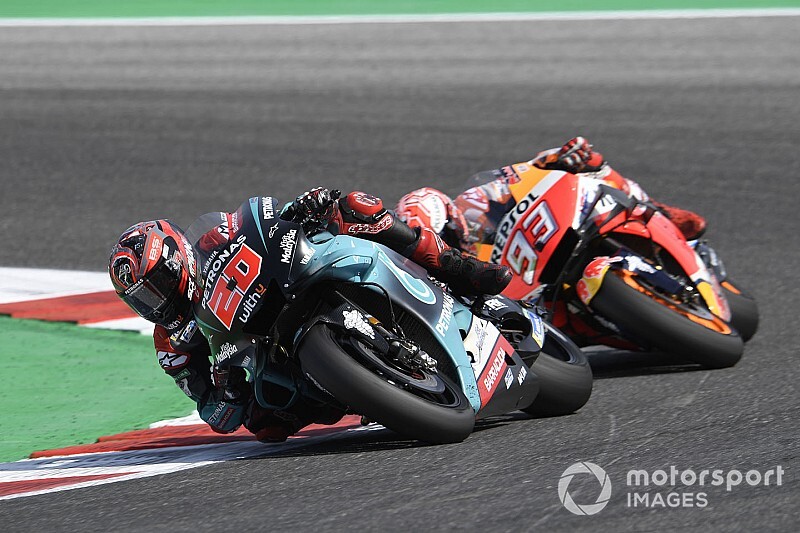 Franco Morbidelli believes his Petronas Yamaha teammate Fabio Quartararo is only saying he still has a lot to learn in MotoGP to make his rivals “a little afraid”.

Quartararo fended off reigning world champion Marc Marquez for most of the 27-lap San Marino Grand Prix last weekend, with the Honda rider eventually getting through on the final tour to deny him a maiden victory.

The French rookie said his battle with Marquez was “the best moment of my life”, and suggested he was able to learn a lot from it.

However, teammate Morbidelli believes Quartararo “has little to learn”, and is believes he is deliberately duping his rivals into believing there is more to come from him.

“These are the things you say when you are young to scare your opponents a bit,” he said.

“From Valentino [Rossi] I could learn some things related to this occasion, but I don’t know if they could be useful on other occasions.

“He is first on every lap: what is there [left] to learn? How to be half a lap ahead of everyone?

“In my opinion it’s more of a [strategic] move to make his rivals think he can improve even more. It’s a bit of a tactic, because now Fabio has little to learn.

“Then again, maybe it’s true and at the next race he will be half a lap ahead of everyone.”

Morbidelli struggled to match the pace of Quartararo at Misano, and ended up just a tenth behind the works Yamaha of mentor Valentino Rossi in fifth at the chequered flag.

After several mistakes while battling Rossi, Morbidelli tried to reclaim fourth late on, but admits he “couldn’t fool” him.

"It was a positive race,” Morbidelli said. “I matched my best result of all time on this track between Moto2 and MotoGP, so I am happy with this.

“The feeling in the race was not great, so I had to keep a margin for a moment: I closed the front a couple of times and didn’t want to waste everything then.

"At that point I had to slow down a bit, but Valentino took me back and we had a good fight in the final laps.

“But I couldn't fool him, because he was very fast. It was a positive weekend in the end.”