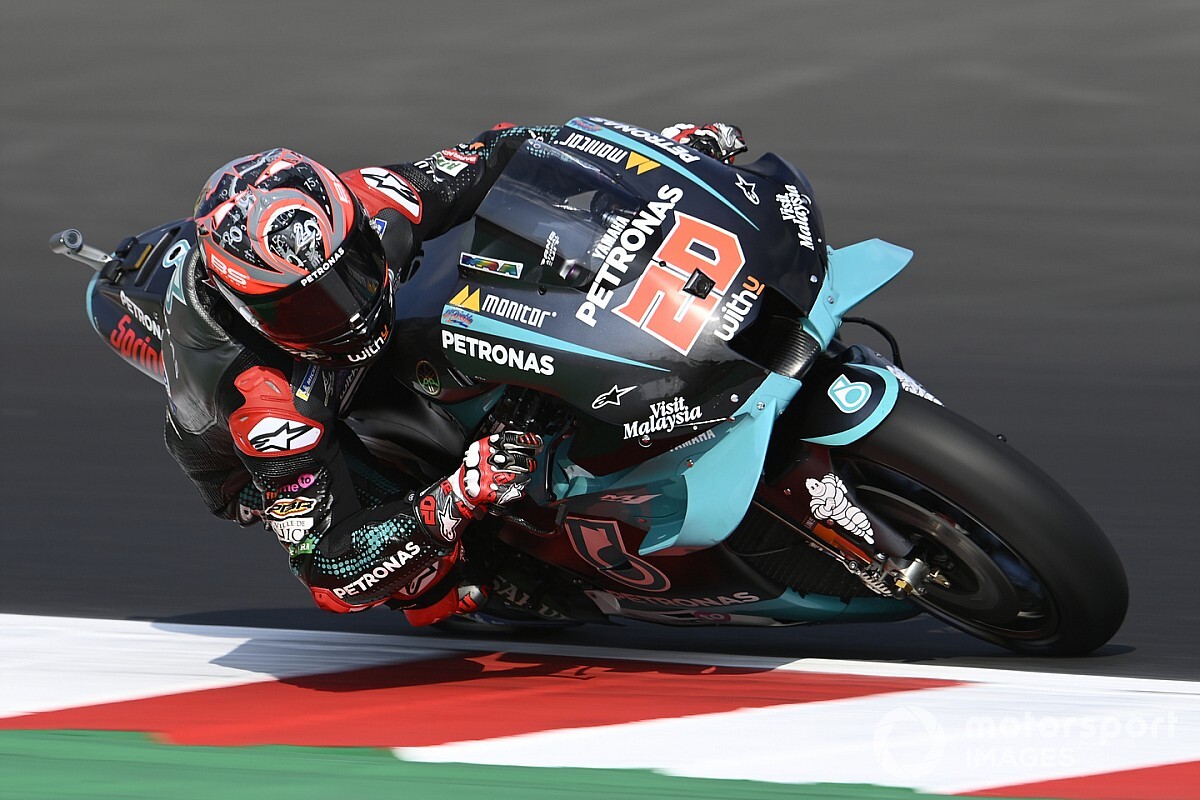 For the third time this season, MotoGP returns to the same circuit for a second grand prix, which also follows on from a one-day test on Tuesday.

San Marino GP race winner Franco Morbidelli set the early pace on his Petronas Yamaha with a 1m33.194s, before KTM's Pol Espargaro moved into top spot with a 1m32.390s.

Morbidelli - who was absent from Tuesday's test due to a stomach upset - returned to the top of the pile with just under 15 minutes gone with a 1m32.365s,

He would better this in the final 15 minutes to a 1m32.224s, with Ducati's Andrea Dovizioso deposing him with six minutes to go on a soft tyre time attack.

Dovizioso, who struggled throughout the San Marino weekend but made a breakthrough in set-up in the test, went fastest with a 1m32.152s.

This stood as the benchmark very briefly, as Joan Mir guided his Suzuki to the first sub 1m32s lap of the day with a 1m31.926s.

Quartararo, who branded the Suzuki "perfect" on Thursday, edged ahead of the GSX-RR on his Yamaha with a 1m31.889s and ended the session with a 1m31.721s.

Morbidelli opted for a hard tyre at the end of the session, and ended up just 0.090 seconds adrift of his teammate, with Pol Espargaro - who held top spot briefly in the closing stages - completing the top three on the KTM.

Mir was pushed back to fourth at the chequered flag ahead of Tech 3's Miguel Oliveira and LCR's Takaaki Nakagami.

Dovizioso's 1m31.152s left him in seventh in the end, fellow Ducati rider Johann Zarco - riding with an updated chassis on his Avintia bike - trailing him in eighth ahead of Aleix Espargaro on the Aprilia and Pramac's Francesco Bagnaia.

San Marino GP poleman Maverick Vinales didn't go for a time attack at the end and was 13th, with Yamaha teammate Valentino Rossi 1.1s off the pace in 17th having also not gone for a flying lap late on.

Alex Rins had a near-highside at Turn 5 midway through the session, and ended up crashing around 10 minutes later at the Quercia corner at Turn 8.

He was 16th in FP1 as a result behind Pramac's Jack Miller and KTM's Brad Binder.