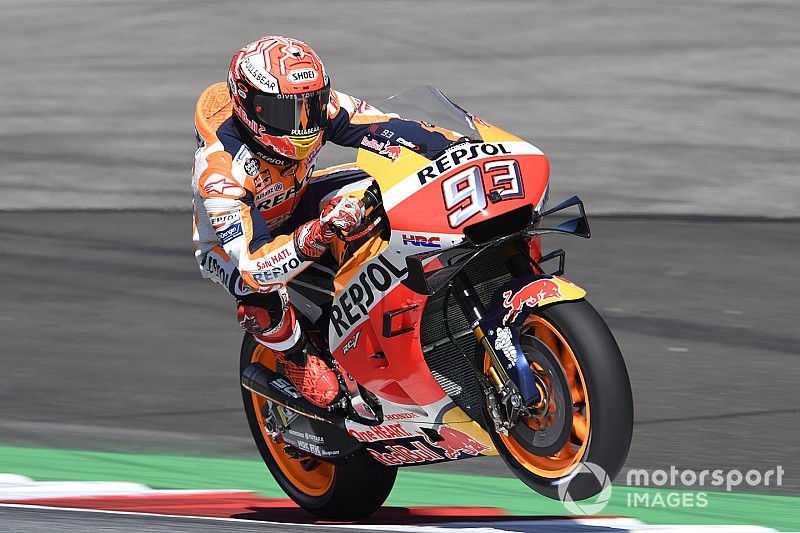 Having finished second in the opening practice, Marquez equipped a new soft rear tyre and posted the first sub-1m24s effort of the weekend less than 10 minutes into the session.

No other rider came within even four tenths of Marquez’s 1m23.916s for the next half-hour, until satellite Honda rider Takaaki Nakagami moved up to second place, 0.382s off.

Petronas Yamaha’s Fabio Quartararo then snatched second place from Nakagami, but the Japanese rider was quicker again on his next attempt, coming up 0.155s short of his Honda stablemate Marquez’s effort.

With less than a minute left on the clock, Vinales lapped within 0.066s of Marquez as the second rider below 1m24s – but as the chequered flag flew, Marquez would ultimately go unmatched, despite himself forgoing a customary late run on a fresh rear tyre.

Nakagami and Quartararo made up the top four, with Pramac rider Jack Miller ending the day as the fastest of the Ducatis, 0.392s off the pace in fifth.

Miguel Oliveira was a standout sixth for Tech 3 KTM, four places up on Pol Espargaro, with both currently on course to automatically make Q2 at the manufacturer’s home race.

Danilo Petrucci spent most of the session in second place but did not improve on his final run, ending up seventh. Also failing to improve late on was his works Ducati teammate Andrea Dovizioso, the Italian crashing out at Turn 3 and having to settle for ninth.

A last-gasp flyer from LCR Honda’s Cal Crutchlow put him between the two Ducatis, and relegated Valentino Rossi out of the combined practice top 10. Rossi and 12th-placed Alex Rins, the sole Suzuki representative this weekend, are two riders who thus need to improve in FP3 if they are to progress to Q2 directly.

Oliveira’s Tech 3 teammate Hafizh Syahrin was cleared to resume competing this weekend after his nasty FP1 crash. The Malaysian ended up 21st and last in FP2, but was just 1.353s off the pace.

Iannone facing "biggest challenge of my life" at Aprilia