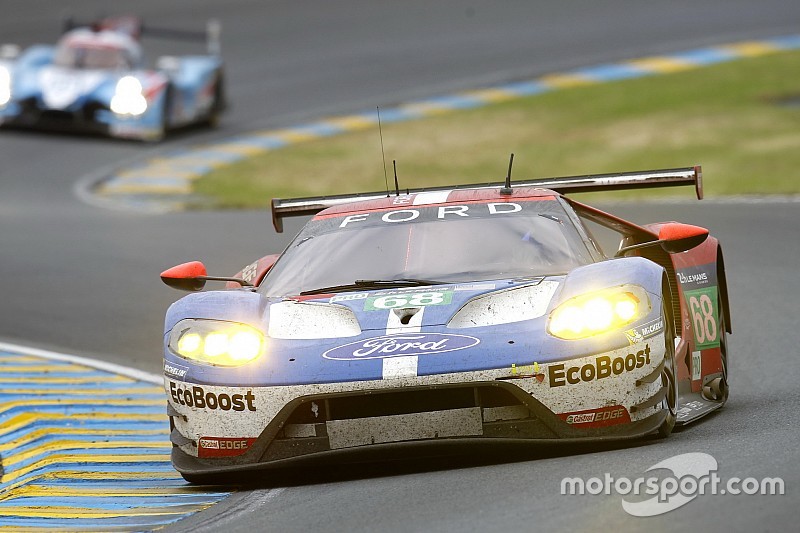 Joey Hand says that he and the other drivers responsible for delivering Ford a historic class win in the Le Mans 24 Hours will “go down in history” for their achievements.

Along with teammates Dirk Muller and Sebastien Bourdais, Hand piloted the GTE Pro-class winning #68 Ford GT, which triumphed over the #82 Risi Competizione Ferrari 488 GTE after a race-long duel.

The #68 crew was handed two post-race penalties for speeding in a slow zone during the race and a faulty wheelspeed sensor, but its win stood as the #82 Ferrari was also punished for failing to serve a stop-and-go penalty in the closing stages of the race.

Coming 50 years on from the Blue Oval’s first overall triumph at Le Mans, Hand says that he and his fellow Ford drivers will be remembered for a long time to come for their success at La Sarthe.

“I’m just proud to be a part of this programme,” the American told Motorsport.com. “To have Ford come back [and win] after 50 years, and to be able to be part of the driver line-up is a big deal.

“We’ll go down in history. My kids will be able to read about it in books and magazines, and that’s fun.

“We absolutely drove our heart out, and we didn’t make any mistakes in the #68 car. Toni [Vilander, driver of the #82 Ferrari] pushed hard to catch me and he spun.

The sister Ford Chip Ganassi Team USA car, the #69 of Scott Dixon, Ryan Briscoe and Richard Westbrook, took the bottom step of the podium, becoming detached from the lead fight late on during a safety car period.

After the race Dixon, the four-time IndyCar Series champion who was contesting Le Mans for the first time, told Motorsport.com: “It’s been a hell of an experience.

“I have to thank Chip [Ganassi] and Ford for allowing me to join the programme, and all the people that have put in the hard hours to make a car that lasted the whole race with no problems.

“For me, to come here for the first time and be part of such an historic story, it’s especially meaningful because of the 1966 win with two Kiwis [Bruce McLaren and Chris Amon].

“I wish I’d had a little more preparation from my side of things, maybe being able to join the test day, and of course we didn’t win, but it was quite an experience to be up there on the podium.”

Ford’s pair of WEC season-entered Chip Ganassi Team UK cars, the #66 and the #67, finished in fourth and ninth in class respectively after both hitting problems during the race.

The #66 crew of Olivier Pla, Stefan Mucke and Billy Johnson were delayed by an electrical issue that cost it a lap, while the #67 car driven by Andy Priaulx, Marino Franchitti and Harry Tincknell had to be wheeled off the grid at the start due to a gearbox problem.