Pagenaud on first 2018 IndyCar test: "The series has got it right" 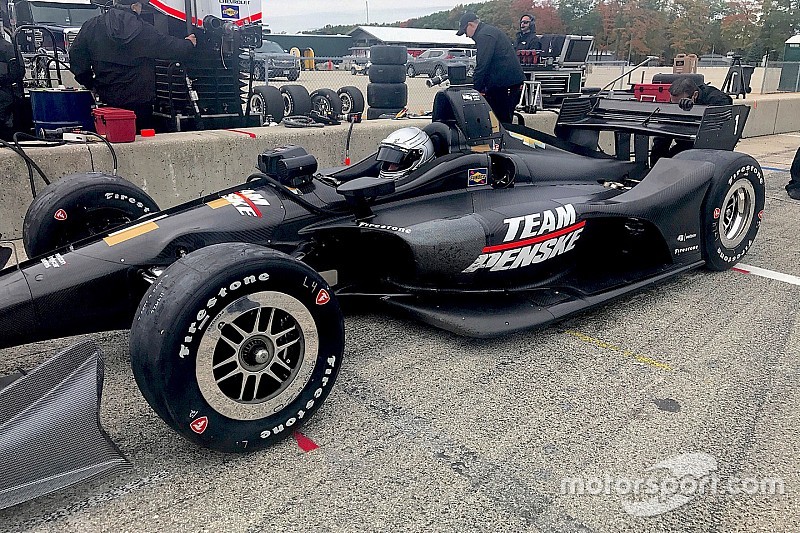 DM: What were your first impressions of the new car?
SP: It’s very interesting, very different from the cars we’ve seen in the last few years, but quite enjoyable. There’s definitely less grip, which is very good. It’s just a different challenge and I enjoyed it.

Did you notice the reduction in drag and improved acceleration up that long front straight?
The acceleration is pretty strong, yes, but I think the drag was similar to what we’ve had so the straightaway speed was similar in that configuration.

The last few years on roadcourses, drivers have talked about how the excessive downforce meant there was minimal amount of time between coming off the brakes and going wide-open on the throttle. Has that changed much with this car?
No it’s not a lot different. There’s less downforce, but the braking zone hasn’t changed that much although the application of the brakes is a bit different, the way to steer the car into the corner is a bit different. But overall, we’re still in the same era of car, same tires as well. The less downforce is good because your hands are more full, but the trend is quite similar.

All the high-speed corners, the reduction in downforce was noticeable – Turn 1, the Carousel – the car slides a lot more rather than being stuck. So there’s more pedaling going on, which is good. The low speed corners I found the car was very good and very efficient under braking.

I suppose the biggest thing I found was that you can yaw the car quite a bit more than before, probably a result of the weight distribution characteristic. When you have a moment, when the rear breaks away, it’s a lot easier to catch than it used to be. You can light up the tires on exit and control the slide.

So that should make it more fun to watch. And the car looks really sexy too!

Did you find that wing adjustments made more of a difference on this aerokit compared with the manufacturer aerokit you’ve been working with for the last three years?
Hmm, I didn’t do a scan on downforce levels, so I probably can’t comment on how efficient the trims are. But the front wing reacts pretty well, the alignment works pretty well, the springs I felt were pretty numb. This was just was my first day on it.

Do you think this car will help increase passing opportunities because the braking zones are longer, or because it’s just going to be easier to make a mistake in these cars? Or will it be because it’s easier to follow another car now?
Good question. I mean, like I said, I didn’t find the braking zones were longer – I actually thought they were quite similar. The car is just so efficient. And I didn’t get to follow anyone [Spencer Pigot in Ed Carpenter Racing’s #21 was the only other car present] so I didn’t get to experience the draft. So I don’t know how much draft there will be or how much the air will be disturbed. I can’t answer that – I wish I could!

Do you agree with the feedback from Juan Pablo Montoya and Oriol Servia [Chevrolet and Honda’s testers of the 2018 kit] that the tire compounds will need switching up to maybe make them more progressive when they slide?
I did do some testing for Firestone, two different tires, and their behavior was quite different to the tires we’ve had in the past. I think if they mix what they brought today with what we’ve had in the past, it could work well. But at the end of the day, whatever tires we’re all on, it’s up to us – the teams and the drivers – to figure it out, and what works the best way.

The tires are 80 percent of the car equation so it’s a very important component and I thought what Firestone brought was interesting – maybe not the final solution for a good product, but perhaps a mix would work well.

How did the lap times compare with when you raced there in June and is there any point in making a comparison?
It was a cold day on the track and with only two cars going around, there wasn’t much rubber going down. But I felt the lap times were quite decent – a couple of seconds slower compared with qualifying on reds – but that’s normal because we had less downforce.

But it feels like the acceleration is strong coming out of the corner, so I feel IndyCar really got the 2018 car right with this package. Definitely more emphasis on mechanical grip than aero like it used to be. Very positive.