Piloting the No. 23 Team Seattle Porsche 911 GT America, Alex Riberas, of Barcelona, Spain, started his first stint in second place in the GTD class. This is Riberas' first Rolex 24 so it took a little while for the Spaniard to settle in under race conditions. But, as he finished up his second stint, he ran the team's fastest race lap to that point with a 1:48.676. 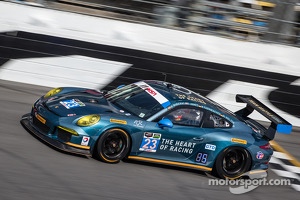 "This was my first 24 Hours of Daytona," Riberas said. "It was very special for me. It was very new to me because I am used to overtaking cars. But here, you have to be racing all the time and looking in your mirrors. It was very tricky in the beginning. But, lap after lap, I got better and better."

Marco Holzer took the car up to mid-night and turned the Team Seattle-The Heart of Racing Porsche over to Ian James (Phoenix, Ariz.) for the early morning double. James brought the car in just after 1 a.m. in eighth as the team proceeded to put on new brake pads.

"My second run was pretty eventful," James said. "We tried a mix of new right side tires, with used left sides. That was a nightmare. Then toward the end I was running out of brakes. I'll get back in the car mid-morning."