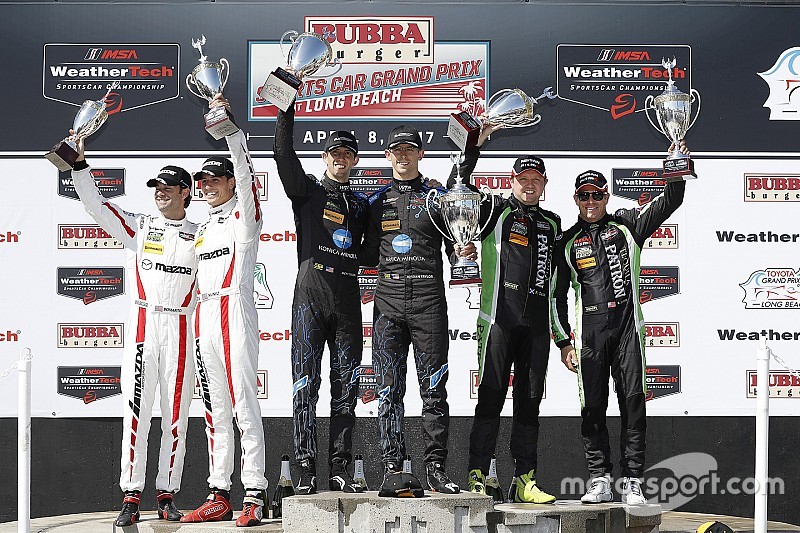 There was carnage on the streets of Long Beach in the Bubba Burger SportsCar GP, as the Taylors were exemplary again, Ryan Dalziel drove like a hero, and overambition claimed many and even changed the course of GTLM on the final lap.

Ricky Taylor took the lead at the start, with Tristan Nunez’s Mazda RT24-P determinedly tucking in behind to delay Christian Fittipaldi’s Action Express Racing Cadillac from turning in, thus the Mazda moved into second. Eric Curran held fourth in the second AXR Caddy.

But behind there was chaos as Toni Vilander’s Ferrari 488 grabbed the lead in the GTLM class but spun the tardy ESM Nissan of Ed Brown around.

Just before the yellow flew, Tom Long had moved the second Mazda into fifth, past Misha Goikhberg’s JDC-Miller’s Oreca. Following the restart, Goikhberg threw it away in Turn 9, skating straight on having been unsettled by the bumps.

On Lap 21 down the back straight, Fittipaldi failed to clear Gunnar Jeannette’s GTD-class Mercedes-AMG GT3 before chopping over to claim the apex. The #5 Cadillac was nudged hard into the tire barrier, resulting in a mangled rear end. By the time Joao Barbosa was able to resume in the car, he was three laps down.

The next yellow caused all but one of the Prototypes to pit simultaneously, but Joel Miller, who’d taken over the #70 Mazda from Long, couldn’t pull away and lost a lap as the car was restarted. At the front of the class was Ryan Dalziel in the #2 ESM Nissan, but would in theory have to stop again.

The real focus was on Jordan Taylor in the WTR Cadillac and Dane Cameron in the AXR Cadillac – and the pair swapped places at the end of the pitstraight on Lap 40.

However, as they negotiated GT traffic – which had been running legitimately ahead – as a result of the vagaries of the yellows and the pitstop strategies, Taylor regained what would become the class lead once Dalziel next pitted. Cameron then had a heavy hit, bouncing off the apex wall at Turn 8 which spat the AXR #31 entry into the outside wall. A disastrous race for Action Express.

But the long yellow that followed was Dalziel’s blessing. He wouldn’t have to stop again now. Could he hold off Taylor’s Cadillac once they got clear of the GT cars with 18 minutes?

Initially, it appeared not: on a clear track, Taylor closed at the rate of 1sec per lap, but strong laps from Dalziel kept the Nissan DPi in front. However, a cluster of GTD cars baulked Dalziel and down the main straight on the 58th lap Taylor drafted past to grab the lead around the outside at Turn 1.

Dalziel initially tried to retaliate but then settled for an excellent second place, with Bomarito third, nine seconds down.

Stephen Simpson brought the JDC-Miller Oreca in fourth with Tom Kimber-Smith fifth in the PR1/Mathiasen Ligier.

Vilander’s collision with Brown had not only resulted in a retired Ferrari, but also a heavily delayed Ford GT, the #66 of Joey Hand, and the polesitting #3 Corvette of Jan Magnussen.

At the second yellow, Magnussen, Westbrook, Hand and Patrick Pilet (#911 Porsche) pitted. But the real race-changing incident for GTLM was caused by Dirk Werner. The German who had taken over the #911 Porsche from Pilet, nudged the #66 Ford – now driven by Dirk Mulller – into a spin at the hairpin.

The stalled Ford blocked the track temporarily and lost its rear wing, having already lost its hood in the Vilander/Brown shunt.

The class gained some glory following the stops, with Martin Tomczyk putting the #24 BMW up front, chased by Antonio Garcia in the #3 Corvette, Ryan Briscoe in the #67 Ford. Werner would have been fourth but received a drive-through penalty.

Tomczyk seemed to have it all under control in the closing stages, but suddenly slowed on Lap 53, allowing Garcia to grab the lead, while a slightly wrong-footed Briscoe lost momentum allowing Tommy Milner to grab second.

All of a sudden it was a Corvette 1-2, with Briscoe third, Kevin Estre fourth in the #912 Porsche 911 and Alex Sims fifth in the second BMW.

All looked good until the final lap, when Garcia encountered a cluster of three GTD cars collided at the final hairpin.

He couldn’t find a way through, but there was just enough space for Milner, Briscoe, Estre and Sims to tiptoe through and claim the top four slots spots. A ridiculous way for a deserving winner to miss out.

However, Sellers pitted while the pits were still officially closed, and therefore had to sit in the penalty box for a minute.

To win the class clearly took being involved in a fracas with a Prototype, as Jeannette claimed P1 for Riley Motorsports-WeatherTech Racing with Cooper MacNeil.

In fact it was a 1-2 for Mercedes-AMG GT3s, as Jeroen Bleekemolen and Ben Keating claimed second for Riley Motorsports.

Alessandro Balzan and Christina Nielsen were third in the Ferrari 488 of Scuderia Corsa, with Jorg Bergmeister and Patrick Lindsey fourth in the Park Place Motorsports, but only after Jeroen Mul’s Change Racing Lamborghini had a coming together with the Mazda Prototype of Miller, two laps from home.