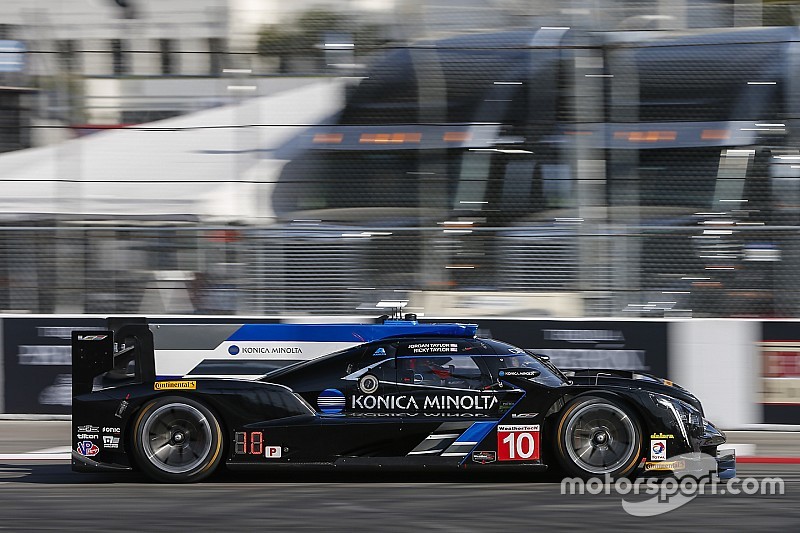 The winners of the Rolex 24 Hours of Daytona and Twelve Hours of Sebring had a 0.2sec edge over fellow Cadillac runner Action Express Racing, as Taylor laid down a 1min13.549sec lap. Christian Fittipaldi whittled that gap time down over the course of the session and simultaneously pulled out a 0.375 gap on his nearest pursuer, Tristan Nunez who grabbed third in the #55 Mazda DPi.

That was fast enough to at least break up the Cadillac party, and another runner – Misha Goikhberg in the JDC-Miller Motorsports Oreca – also knocked the third Cadillac, steered by Eric Curran, down to fifth.

The Patron ESM Nissan DPis of Scott Sharp and Ed Brown were sixth and ninth, sandwiching the second Mazda of Tom Long and the PR1/Mathiasen Motorsports Ligier of Will Owen.

The Visit Florida Racing team will take no further part in the event, thanks to a major shunt for Renger Van Der Zande in the #90 Multimatic Riley during this morning’s practice session.

Jan Magnussen was the only GT driver to dip under the 1min17sec barrier, setting a 1min16.909sec lap. When the #67 Ford GT of Richard Westbrook clipped a tire barrier, dumped debris on the track and brought out the red flag, Magnussen’s efforts in the #3 Corvette C7.R had proven enough.

The other Ford GT, piloted by Joey Hand, will line up alongside Magnussen having fallen 0.1sec short of usurping the canary yellow V8 beast.

Toni Vilander was third in the Risi Competizione Ferrari 488 while Laurens Vanthoor was fourth in the sole works Porsche 911 RSR. His teammate Patrick Pilet was unable to start the session after thumping the wall at Turn 8 during the practice session immediately before qualifying.

The Rahal Letterman Lanigan Racing BMW M6s of Bill Auberlen and John Edwards were fifth and seventh, separated by the second Corvette of Oliver Gavin.

Bryan Sellers stole a last-gasp pole from ex-IndyCar racer Jack Hawksworth to put the #48 Paul Miller Racing Lamborghini Huracan on pole by a mere 0.033sec, lapping the course in 1min19.243sec.

Jack Hawksworth slotted the sole Lexus RC F into second as 3GT Racing’s new-for-2017 entry proved – as it had in Sebring – that it handles bumps exceptionally well.

Daniel Morad slotted the Alegra Motorsports Porsche 911 GT3 R into third, just one tenth from Sellers’ best while Corey Lewis was a breathtaking four-thousandths behind in the Change Racing Lamborghini.

Ben Keating was fifth in the first of the Mercedes AMG GT3s with Lawson Aschenbach (Stevenson Motorsports Audi R8) and Jan Heylen (TRG Motorsports Porsche 911) in sixth and seventh.