As if IMSA finally making its way back to the Circuit of the Americas (COTA) track for the American Le Mans Series today weren’t exciting enough, breaking news that EFFORT Racing has asked veteran driver and Austin-native Mark McKenzie to drive its car should boost your turbo a bit. 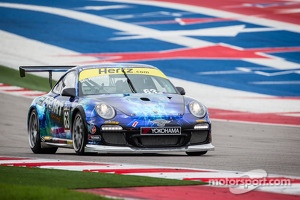 News of McKenzie’s joining for this weekend’s Austin, Texas race should definitely make things interesting for fans and drivers alike as he’s one of ‘those’ drivers who’s not only passionate about racing, he’s just naturally great at it. Or to put it the way we overheard it from someone else, “It doesn’t matter if it’s a Porsche GT3, a Ferrari 458 or a golf cart, he’s going to drive the wheels off it.”

And why wouldn’t EFFORT Racing invite McKenzie? After all, its motto is ‘We come to win,’ and McKenzie definitely knows a little bit about that, practically dominating in every race he is in earning at least one spot on the podium.

At 50 years old, he’s fit, capable and rivals most 30-year-olds, and is becoming somewhat of a rock star on the circuit for his old school, workhorse attitude, which finds him, among other things, foregoing the CoolSuit during most races (though he will wear it in the windowless ‘hotbox’ Porsche for this race, it is Texas after all), while others opt to wear their ‘refrigerated air’ as they try to keep up with him.

He has been driving since the early days of the Ferrari 430, and still drives the #27 Ferrari Challenge car for Ferrari of Houston, and most recently he was part of a Ferrari support race in the Le Mans in Europe.

But racing isn’t his day job.

His company, Ranger Excavating, is one of the top highway construction companies in Texas, and the company that helped build the very track he’s racing on – a track that has overcome everything from the Texas soil and heat to politics and as many naysayers to become one of, if not the best tracks in the world.

This time last year, McKenzie took the number two spot on the podium at the same race; EFFORT Racing’s proven track record make them the team to watch. We’re no mathematician, but put two-and-two together and you’ve got yourself one great race.

EFFORT Racing on hiatus until 2017