For the second time in four years, I had the great honor of seeing one of my photos take first prize at the Sarthe Endurance Photos contest. Here’s the full story.

By:
Eric Gilbert
Listen to this article

There are not that many racing photography contests around, or at least I don’t personally know that many. One that I know and am always keen on participating is the Sarthe Endurance Photos. It is a highly regarded photography competition that has been held since 2010, in which professional (and amateurs) photographers shooting at the 24 Hours of Le Mans and different WEC races (and Le Mans Classic) can enter up to three of their very best shots.

For 2014, I entered three photos and two of them took home the big honors: one got the first place award in professional category, while the other one got the Jury’s Prize in World Endurance Challenge category. Since many have asked why I selected these particular photos and how I shot them, I thought that writing a little something about the whole process would be appropriate.

Le Mans (the big 24-hour circuit) is one of those few tracks where remains a certain scenic character, reminiscent of the golden age of racing. Along with the Nürburgring (the Nordschleife, of course) and Spa, it is definitely a track where I adapt my work: I shoot the scene and atmosphere much more than the cars themselves. But even with those mythical tracks where racing beauty is everywhere, one has to know where to go and location really is a key factor.

For instance, the epic “Ligne droites des Hunaudières” - or “Mulsanne Straight” for the Shakespeareans among you: despite being cut by two chicanes (“esses” would be a better word), it still remains the most authentic portion of the “Circuit de la Sarthe” (the other name for the 13.6-km Le Mans track). Here, one can fully grasp the brutal force of the machine mixed with the courage of the men and women driving them, racing in a scenery combining nature, trees, vintage buildings, and random spectators. If you ask me, this is where lies the true Spirit of Le Mans and makes it unique.

Unfortunately, the recent years have not been very kind to “La ligne droite”, with the unfortunate addition of the oh-so not photogenic FIA fences, modern constructions (a McDonalds here, a PFK there…), and a certain level of deforestation. It is not what it used to be, but some parts do remain quite authentic such as in my winning photo, shot directly across the track from the Auberge des Hunaudières. The spirit of Le Mans is definitely present at this location: a typical French auberge, spectators watching the race through the open windows, a nice evening light, and a bunch of prototypes and GT cars flying by at more than 300 km/h.

The photo that almost never happened

One interesting part with this photo is that its story started in 2012, back when Le Mans became part of the World Endurance Championship and therefore, started to be jointly sanctioned by the FIA and the ACO. A direct consequence for this precise location is that what used to be a track with simple Armco barriers became a track with armco barriers and FIA fence (covered with green vinyl tarps!) so this precise shot facing the auberge from the other side of the track became impossible, much to my chagrin.

In 2013, I gave myself the mission to revive that shot and ask the FIA media delegate Jeff Carter (a photographer himself) to get the FIA to remove the tarps and cut a few photo holes in the fence, to have at least one angle on that landmark building. Very few understood my point, but luckily enough, Jeff was one of them and went through the trouble of coordinating my request with the FIA. That photo was possible again in 2013, but unfortunately, light was somewhat dull that year so I had to wait another year to have the look I wanted.

Because, yes: light is very important here, much more than average. I wanted that auberge to be fully lit by that early evening orange glow typical of the Sarthe region at that time of the year. Precision here was key to the whole thing: I would go as far as saying that this shot is interesting from 19h00 to 19h30. This very photo was shot at 19h20 and 5 minutes later, the same long shadow that was perfectly framing the cars on track was then covering half the track. By 19h45, the whole auberge was in the dark.

This photo is fairly technical, simple and old school: it is about light, composition and being able to capture the feeling of the scene. Everything is about the essence of photography: being able to freeze a moment in time. From the extreme shutter speed to a classic focal length of 35mm, the idea was to capture every element with precision and sharpness, from the race cars flying by to that random spectator (belly naked!) in the window.

In short, I would associate this photo with impressionism: it focuses on a specific scene and gets every detail possible in a contemplative way. As opposed to an image that would express movement using different slower shutter speed techniques, this one makes the scene the real star of the show.

Henri goes back in time

For the final anecdote regarding this photo, let’s bring in none other than the great Henri Pescarolo himself, president of the jury for the Sarthe Endurance Photos contest. The 4-time Le Mans winner was of course at the award ceremony and it is with a genuine emotion that he started sharing memories related to my photo.

Very much part of the “Le Mans royalty”, Pescarolo reminded us that back in the days, The “Auberge des Hunaudières” was actually called “Restaurant des Hunaudières” and was simply known as “Génissel” – the owner back then was Maurice Génissel, another Le Mans figure. Back then, the tradition was that the 24 Hours of Le Mans winners (and friends…) were invited to celebrate their victory at “Génissel”. On this note, the great Henri told us stories about him and Graham Hill celebrating (a bit too much). Epic tales from bygone days…

This storytelling moment made me especially proud: it made me realize that it is still possible, with one recent photo, to bring back memories from 40-45 years ago. I wanted my photo to be old school, I guess my goal was achieved…

Now, on to my second winning photo: the Jury’s Prize. I called it “Audi maxi-selfie” for obvious reasons. This one is all timing and capturing the mood (which was fun) of the moment. 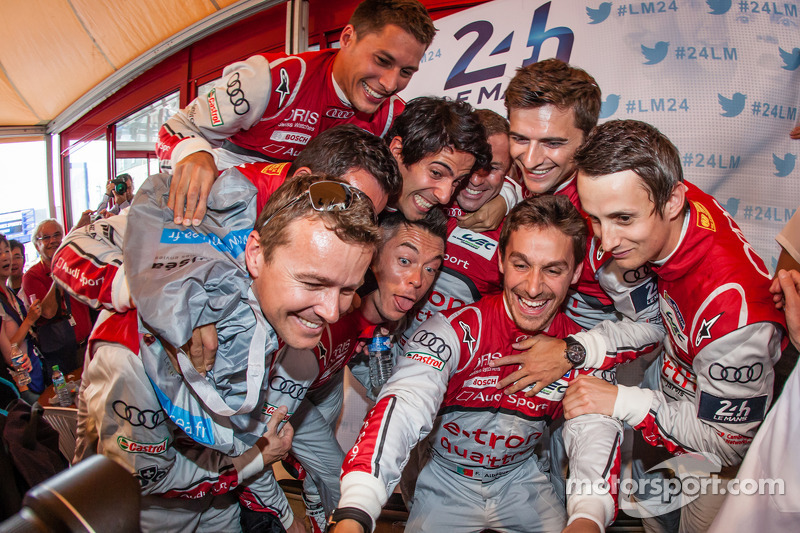 It goes like this: last year during scrutineering, Le Mans organizers had the cool little idea to have drivers make selfies, right after their administrative check. So far, so good: three by three, teammates would oblige and move on. Some would put more “personality” in their selfies, some would just do it automatically. Everyone is different, after all.

When the Audi boys got their turn at the selfie station, they did it car by car, with #1 first, followed by #2 and #3 – things are always well organized with the Audi Mannschaft… Organized, yes, but the Audi drivers themselves can be quite good at messing up this type of plan. So by the time car #3 got their turn (with Filipe Albuquerque holding the iPad), I could feel that things were getting out of control with André Lotterer at the back trying to photobomb the #3 car selfie and Benoit Tréluyer pushing him around. All I needed to do was to create even more commotion by calling the #1 drivers in the shot, with the result that can be found in this picture (which does tell a thousand words). Things got sideways quite a lot and to the point that the backdrop wall ended up on the floor.

Technically speaking, there’s not much to say about a spontaneous moment like this one: just that my best ally for this shot was a 15mm fisheye lens and I had one, ready to go.

Moments of chaotic fun: I love them. And I always try to be ready for them.

Thanks to the jury of the Sarthe Endurance Photos contest. Congrats to all the other winners, from this year and past years. You can see more info about the contest on their website by clicking here.

Latest picture on my screen saver: 'S' like Simonsen

"No decision" on Lotterer's future between Porsche Formula E and LMDh