Five of the top 10 drivers in the 2013 Cooper Tires Prototype Lites Powered by Mazda overall standings are back in the series in 2014.

Three of those top returnees are Masters Class (40 and over) competitors, highlighting the intense racing for class championships that occurs in IMSA's Development Series among young, aspiring talent and older drivers.

The 2014 season starts with two rounds March 13-14 at Sebring International Raceway. The 30-minute and 45-minute races will take place on the historic, 17-turn, 3.74-mile circuit during the Mobil 1 Twelve Hours of Sebring Fueled by Fresh From Florida weekend. 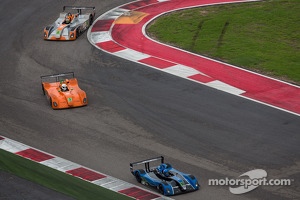 Mikhail Goikhberg is the top returning driver from last year after finishing third in the standings behind the tight race for the title between champion Sean Rayhall and runner-up Ryan Booth. Rayhall has climbed to a Prototype Challenge ride with BAR1 Motorsports in the new TUDOR United SportsCar Championship.

Goikhberg, from Vancouver, British Columbia, is back with JDC Motorsport with teammate and Masters standout Gerry Kraut, who finished ninth in the overall standings last season.

8Star Motorsports returns Christian Potolicchio, who finished sixth overall last season, for one of its four entries. But perhaps the most watched driver in the 8Star paddock - and in the series - could be rookie Dalton Sargeant.

Comprent fell just 11 points shy of rival Performance Tech in the Team Championship last season but will mount another challenge for the title with rookie Andrew Novich and returning Masters racer Darryl Shoff.

Longtime SCCA and Radical team One Motorsports is joining the Cooper Tires Prototype Lites Powered by Mazda this season with three cars at Sebring. Tony Bullock and Masters racers John Falb and Todd Slusher, all veterans of the team, will drive. A fourth entry for 2013 SCCA Runoffs champion Lee Alexander is planned for later this season.