ELKHART LAKE, Wis. (August 7, 2013) – The No. 61 R.Ferri/AIM Motorsport and No. 69 AIM Autosport Team FXDD Racing with Ferrari 458 Italia teams head to Road America with winning fresh on their minds this weekend at the VisitFlorida.com Sports Car 250 at the legendary road course, August 8 – 10. 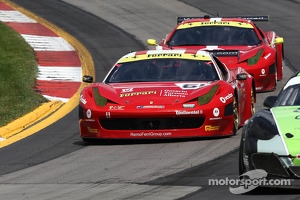 The No. 61 R.Ferri/AIM Ferrari scored its first win last race at Indianapolis Motor Speedway, and the No. 69 FXDD/AIM Ferrari took its most recent win at Road America last year. The difference in 2013 is that Jeff Segal has switched from the No. 69 to the No. 61, and this weekend, has a last-minute new co-driver as he seeks his second straight win of the GRAND-AM Rolex Sports Car Series season.

Segal will co-drive with Kenny Wilden, who fills in for regular team driver Max Papis in the No. 61 R.Ferri/AIM Ferrari. Papis has been called to replace the injured Tony Stewart in the NASCAR Sprint Cup Series at Watkins Glen. Wilden, who was already on site at Road America for GRAND-AM Continental Tire Sports Car testing today, was a logical, natural and experienced replacement. He co-drove the No. 64 Ferrari 458 Italia to a sixth-place finish in the recent Indy race.

“It’s obviously a little bit of a surprise to have a different teammate at the last minute for Road America, but I think Kenny will be able to jump right into our car and get the job done,” Segal said. “He is a winning and experienced driver and most recently drove a Ferrari in the same Indy race that we won so he knows the ins and outs of the 458. I am looking forward to teaming with him.”

Papis wanted to be at Road America to help he and Segal continue their winning ways, but thanks to the blessing of R.Ferri/AIM Motorsport team principal and owner Remo Ferri, “Mad Max” will stay just in one spot this weekend.

“I need to say thanks to Remo, he’s a longtime friend and we spoke about how we would do this,” Papis said. “I was ready to do both; we had everything in place to run the GRAND-AM race. I told him I’d be at the track for Thursday testing, back to Watkins Glen on Friday and Saturday, and fly back with Boris Said or someone for the race. They told me it was better to stay focused in the Watkins Glen in these difficult circumstances.”

With an Indianapolis win in the rear view mirror, the R.Ferri/AIM team has the chance for its first back-to-back wins ever with the No. 61, and first as an organization in GT since Homestead and New Jersey in 2012 with the No. 69.

“Getting our first win out of the way was really important for this new team,” Segal said. “At Indianapolis we proved that we are still able to win races if we do everything perfectly in terms of strategy and execution. So clearly the goal will be to repeat this performance at Road America.”

The No. 61’s breakout victory at Indy came despite the Ferraris having a clear horsepower disadvantage to some of the big-bore V8 competition.

“We've seen that the balance has shifted this season,” Segal said. “While we have had a fast car at almost all of the races so far this year, we find ourselves at a disadvantage when it comes to the actual race craft owing to our lack of straight-line speed. We have worked hard to overcome this on our own, but we can only do so much within the scope of the rules.”

A fourth-place finish at Indy for the No. 69 was the team’s third-consecutive top-four and fifth top-five finish this season in the year’s first eight races. Starting driver Emil Assentato raced to as high as third in his opening stint while teammate Anthony Lazzaro led six laps in his race-finishing run.

“We just missed a podium at Indy and we can blame it on a few things,” Assentato said. “Most of all the team is hungry to get to the top of the podium and we hope to duplicate our win last year with another this year. I know Anthony is very comfortable at Road America and I found good enough pace last year to lead a bunch of laps at the start of the race and later. But ultimately what won us last year's race was strategy and we have to get it right this weekend or fall off the podium again.”

Segal and Assentato teamed together in the No. 69 last year, winning the duos second GT title for FXDD in three years, but this season Assentato has welcomed Lazzaro as his full-season co-driver.

“Our tire strategy in the last pit stop cost us the podium at Indy but we are very happy with the way we have performed the last two races,” Lazzaro said. “We are very hungry for a result this weekend. I have been racing at Road America since 1985 and have good memories there.”

Both the No. 69 team and drivers are in the hunt for the overall 2013 GRAND-AM Rolex Sports Car Series team and driver championships heading to Road America.

The No. 69 AIM Autosport Team FXDD Racing with Ferrari 458 Italia team, and Assentato and Lazzaro, currently rank fourth in both the GRAND-AM Rolex Sports Car Series Team and Driver Championship standings. Their current points total of 215 is just 12 makers shy of the GT leaders in both championships.

- Wilden is a welcome and familiar addition to R.Ferri/AIM this weekend. “Kenny is a fellow Canadian, we know him well, and Andrew and Anthony used to race with him back in the Toyota Atlantic days,” said Ian Willis, Chief Technical Officer for AIM Autosport. “He and Anthony also had a great battle going at Indy for the top five in the last race and Kenny looked as competitive as always.”

- Although he won’t be at Road America, Papis will offer support to the team from Watkins Glen. “I was a little sad because I wanted to jump back and forth – I feel like there’s only a few left, like Stewart, Mario, me, to be able to drive a sprint car, sports car and a midget the day after,” Papis said. “I guess I need to find myself with something to do in the afternoon on Saturday, because there might not be much to do! I’ll watch the GRAND-AM race on TV.”