Daytona Beach – With two Corvette DP entries targeting the same goal - victory in the Rolex 24 At Daytona - Action Express Racing completed 1,396 laps of the 3.56-mile Daytona International Speedway as both team entries ran in the lead before finishing the record-setting race in the top-10. 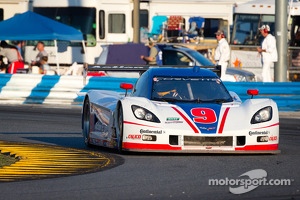 The No. 9 Corvette DP of Joao Barbosa, Burt Frisselle, and Mike Rockenfeller finished the race in fourth after an exciting late-race battle for the win in the last minutes, completing 708 laps of the event, which set an all-time high as 24 different drivers led the race. Working as ‘2 cars, 1 team’, the Action Express cars worked together throughout the first half of the race as both Corvette DP machines ran consistently in the top-five.

The No. 9 was a factor late in the race as Barbosa looked to double his Rolex 24 victory count and score his fifth Rolex 24 podium finish in the final hour of the race. The affable driver from Portugal looked poised to anchor his team’s run to the podium but side-by-side contact while battling for the third position saw him brought into the pits for a penalty, costing the effort a chance at a return to the podium.

The sister No. 5 Action Express Corvette DP of Christian Fittipaldi, Brian Frisselle, Nelson Piquet, Jr. and Felipe Nasr completed the event in eighth after an early morning incident saw the No. 5 sustain suspension damage after contact at the pit exit. Despite the quick and valiant efforts of both the No. 5 and No. 9 team members to make repairs, the team lost valuable track position.

Both Corvette DP machines ran well, with Action Express Racing delivering car preparation that saw the cars performing lap after lap. While the team had been hoping to score a stronger result with both entries, the effort was none the less a strong demonstration of what the organization is capable of after the group reacted well to the setbacks to bring both cars home in the top-10. 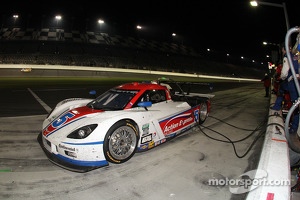 “I was so proud of the Action Express team,” said Team Manager Gary Nelson. “The guys, all of our drivers, all of our crew, all of our engineering, our managers, everybody did an outstanding job today. Unfortunately we didn’t bring it home like we thought we were going to. Late in the race, a couple of unfortunate things happened, and we ended up fourth with the No. 9 car, and eighth with the No. 5. We’ll come back next time. We know we’re strong, we know we did everything that we could do, but it just wasn’t our day.”

“The circumstances today proved exactly what we’re building on - 2 cars, 1 team,” added Team Owner Bob Johnson. “These guys all jumped in working together to get the 5 back out as soon as possible after the damage this morning. We know to expect adversity in a 24 hour race and it is how you react that makes a championship team. Our team was as well prepared and executed throughout the race as well as any, resulting in both cars finishing in good position for points. While it didn’t turn out as we had planned, I am very pleased and proud of this team and it’s a great start for the season. Just watch what we do next.”

Action Express will return to race action next month, as the Rolex Sports Car Series debuts at the remarkable Circuit of the Americas located outside of Austin, Texas.

Joao Barbosa, No. 9 Chevrolet Corvette DP: In the race we had no problems and the car was getting better every stint. And unfortunately that was a terrible call in my view and deciding a race like this is a shame. Obviously I have to congratulate Scott (Pruett) and Ganassi. They had the edge on everybody this year. For sure we could have been on the podium – an easy podium. We were very able to do that and we deserved that. We did a solid job - we got really good points. A great start for the GRAND-AM season so for us we’re pretty pleased with a fourth place regarding the points. Obviously we still have a lot of work to do to match Ganassi. But we’ll be there. It’s still a long season. It’s only the first race out of 12 and we’re much better than what we were last year and I’m looking forward to the next race.

Burt Frisselle, No. 9 Chevrolet Corvette DP: “I never thought it would hurt so bad to finish in the top-five in the Rolex 24 but this one time is painful. With that being said, I am so thrilled to be a part of Action Express - the team that Elton Sawyer and Ian Watt and Gary Nelson has built is just unbelievable. I’m honored to be representing the ‘bowtie’. I’m so proud of to be part of the Chevy organization. The whole thing is just bittersweet because there is so much excitement and so much hope for the future but the penalty today hurt really bad. We thought we were fighting for a (Rolex) watch here. The officials saw it a different way but you know what, we’ll be in Texas and we’ll fight hard. This group of guys is so impressive and I’m thrilled to be here.”

Mike Rockenfeller, No. 9 Chevrolet Corvette DP: Before the race we weren’t expecting too much because the straight line speed we had compared to the BMWs was just not enough at all. So we knew it was going to be tough and we were aiming for a podium at least. I think the whole race we did a fantastic job. My two teammates did awesome - they were running trouble-free really, really fast so it was great to be with them. And then I tried to do my best at the end. I could push the car and yeah we were going for at least position two and then to get the penalty like was disappointing. In a 24 hour race you want to see hard racing, but that’s racing, it’s life, and we can be proud of what we achieved. The team did really, really well. We will be back one day and hopefully we can win again.

Christian Fittipaldi, No. 5 Chevrolet Corvette DP: “We were on target up until about 2-3 in the morning. Exactly what we had planned for. Unfortunately we had a small off coming out of the pits and that broke our rear suspension and we lost 22 laps. At that point it was the end of the race for us. We (the No. 9 & No. 5) were running together all the time and we were running together as planned until we had this little incident. And then obviously our car was completely off set to the whole strategy and from that point onwards when you’re 20 laps behind there’s really nothing else you can do especially since there was only eight hours left in the race and there was no rain in the forecast! So we just took it easy and finished the race and collected the points - and maybe these points can make a difference for us for the rest of the year.

Brian Frisselle, No. 5 Chevrolet Corvette DP: “Once we realized that we didn’t have the winning potential with the No. 5 car anymore we were just cheering for the No. 9 guys. It was a little disappointing that something like (the contact with the No. 60) affected the 24 hour race like that, but very proud of the Action Express teams. They gave us great racecars. They gave us two cars that were good to go to the end and to compete. Unfortunately we had a little mishap with the No. 5 car and then the No. 9 got penalized but they were there to the end and this team kept fighting.”

Felipe Nasr, No. 5 Chevrolet Corvette DP: “First of all it was great to be back here after being third last year in my first Rolex 24. I was pleased to be with Action Express because it was the first team I tested for when I came over here. And I knew we had a very good team with Christian (Fittipaldi), Brian (Frisselle), and Nelson (Piquet, Jr.). I think we had great drivers in the car but racing sometimes doesn’t go as planned. We still gave it a great effort out there to score some points in the championship. It was a great experience and I hope I’m here next year.”

Nelson Piquet, Jr. No. 5 Chevrolet Corvette DP: “We changed the brakes and when we went out they started having a lot of front lock I’m guessing because the rears weren’t hot enough. So I got a big vibration so I came in and we put on new tires. It was about 4 or 5 in the morning and it was very slippery at the exit of the pits and obviously this was my first time doing this and I made a mistake, slipped and touched the wall and it was enough to bend our rear suspension. I’m sad, and I’d like to say sorry to my team because they gave us a car that probably could have finished in the top-three. It has been a great experience and I loved it.”