Do you know why a race starts when the five red lights go out or what exactly all those people do on the grid? Find out that and more here…

Whatever time an F1 race begins, you can guarantee the F1 teams have already been working for hours to get prepared. This is the sharp end of the weekend, and precision timing is crucial to get team and driver in top shape for the off.

Here’s what it takes and how they do it. 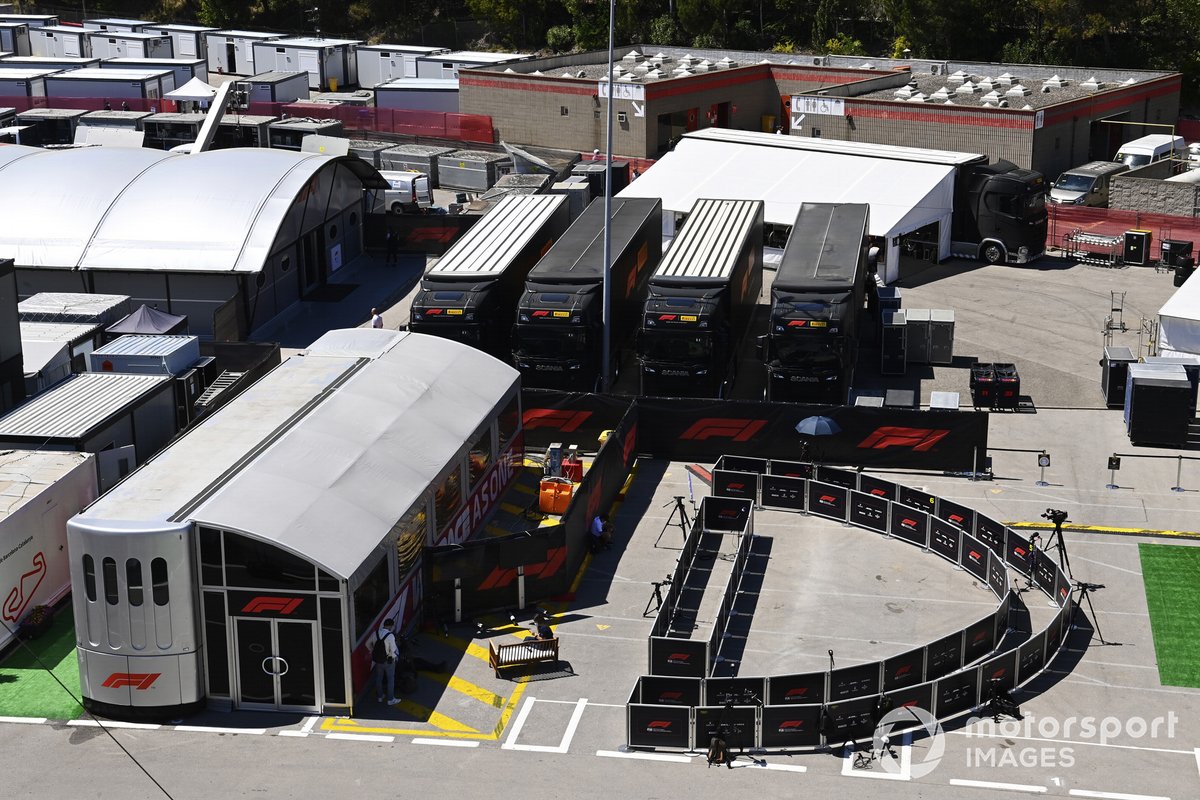 F1 trucks in the paddock

Teams arrive at the track around 7:30am for breakfast in the motorhome. The strategy meeting is held around 9am, with the lead strategy engineer – who will typically have been up late on Saturday computing different race scenarios – outlining the preferred plans for the race.

These strategy plans are based on a combination of historic data (such as the potential for a safety car, the length of the pits, the team’s position in the paddock, etc), practice data, grid position and weather predictions.

Drivers often start race day with some light warm-up exercises at the hotel, and maybe a sports massage, before heading to the track. It’s a long wait for lights-out, so some watch the Formula 2 Feature Race to get an eye for racing lines or track conditions, some sit in their motorhome rooms for some quiet time and some spend time visualising the race in their mind.

Drivers will usually eat no later than two-and-a-half hours before the race, after which they switch to water and electrolyte drinks to stay mentally sharp.

Around one-and-a-half hours before the race, the whole race team gathers in the garage – all wearing headsets for privacy and clarity – to be briefed on the race plan. This covers plans for the start, different pit stop scenarios, a detailed weather report and any non team-specific of organisational updates.

At this point it is crucial for the driver to get into a relaxed but confident state.

Each has a different routine, but it could include eye muscle exercises, reaction drills, stretching and active exercises such as high jumps, boxing, clap press-ups and reaction games that focus on hands, feet or fingers.

Meanwhile, the trolleys are wheeled out to the grid around an hour before race start, and the teams prepare the generators and cooling fans – which use dry ice to super cool the cars on the grid. 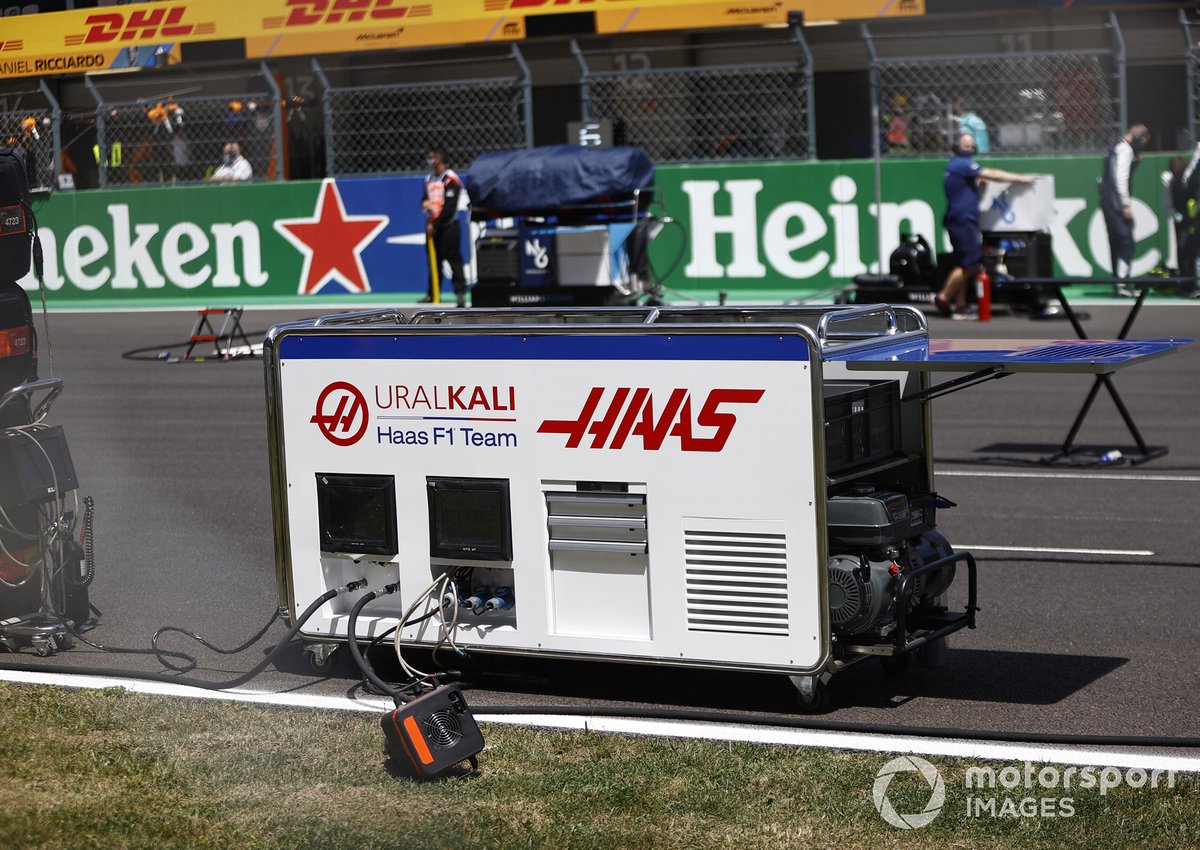 F1 generator on the grid

When the pit lane opens, the cars will go out on an ‘installation lap’. This is a legacy from the past, when teams stripped down their cars and rebuilt them between qualifying and the race.

Back then, formation laps were used to make sure everything was working. Now, with the cars in parc ferme conditions between qualifying and the race, they are more for a driver to get a feel of the conditions.

Drivers typically do a flying lap, return to the pits, then go out again to meet their mechanics and engineers – a maximum of 42 for each car – who are already waiting on the grid.

The drivers stop at the back of the grid and are met by mechanics who jack up the car, slide ‘wheelie boards’ underneath and walk it into its grid position.

Once on station, drivers jump out of the car and try to tune out, often cooling down under umbrellas or throwing ice towels around their shoulders to stay cool. Some try to avoid grid interviews, others are happy to talk.

Many don headphones and tune out to music. Daniel Ricciardo, for example, recently revealed the pre-race playlist he can be seen dancing to on the grid. Apparently, it includes hip-hop gym bangers, rock and EDM, covering everything from modern rap to noughties-era electro.

Whilst drivers are tuning into their tunes, the rest of the team are checking in to the race radio transmissions. There is one main channel for all to hear, while individual teams dial in to different group channels and the race team manager has a direct feed with the drivers, giving them timely reminders of the sporting regulations and the pre-race preparation process.

Information flow on the general channels will include up-to-date weather conditions such as wind intensity and angle, strategy modifications, instructions on tyre temperatures and any last-minute issues.

On the grid, every person has a specific set of jobs to do. All pre-determined. Each car has a number one mechanic and a senior race engineer, and that pairing takes joint responsibility for organising the rest of the people on the car’s team.

They will fit cooling fans, tyre blankets and plug in the ‘umbilical cord’ to a computer laptop to control the car. Among other things, the engineer will check the steering wheel switches are set right for race start and the front wing angles are correct. Meanwhile, powerplant engineers prepare the start sequence.

In the empty garage, chairs are lined up for the mechanics to sit during the race. 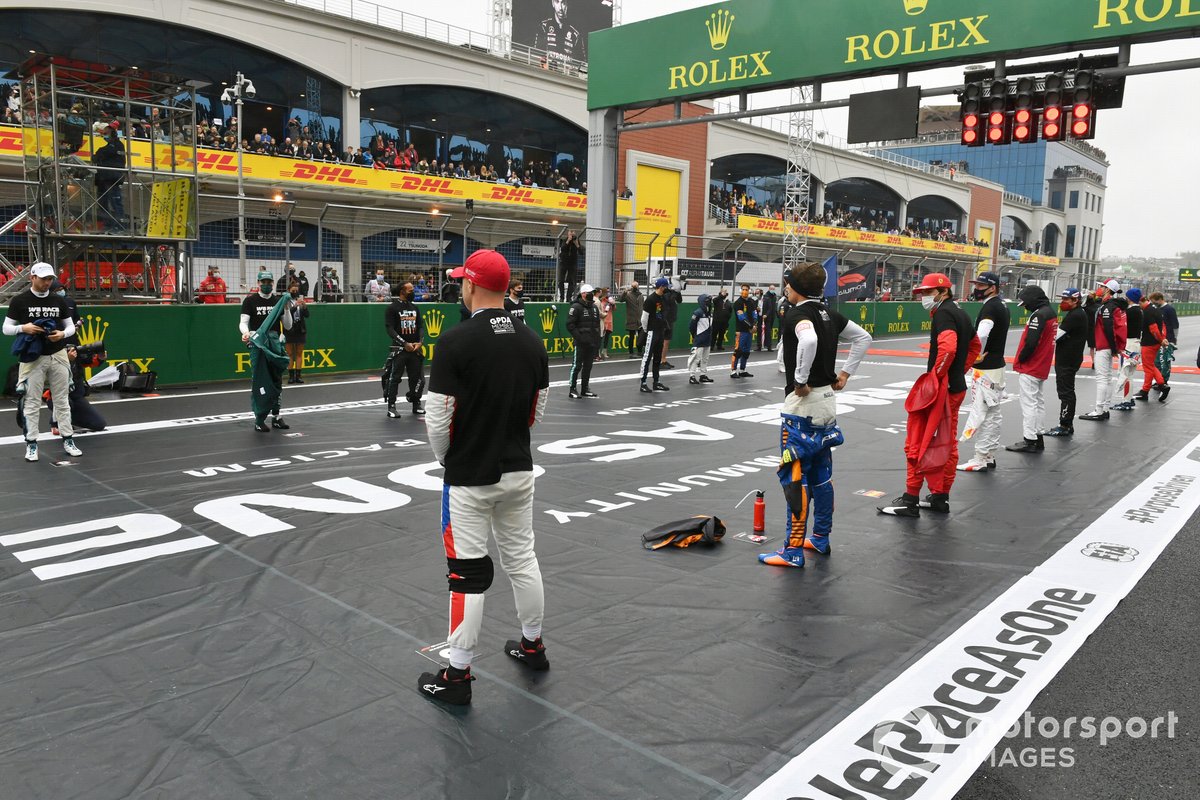 On the F1 grid

This is the cut-off for cars to leave the garage. After this, anyone left there must start from the pit lane exit. This only really happens when teams need to do last-minute repairs or gamble on rain tyres if the weather looks iffy.

Drivers will nip to the pits for a wee – sometimes getting nabbed by TV crews en-route. They then join the formal procedures at the front of the grid, including the national anthem and the #WeRaceAsOne initiative.

From now on, a series of sirens and signals mark the approach of the start – ten minutes, five minutes, three minutes, one minute, and fifteen seconds before the start of the formation lap.

The hustle and bustle of the grid dies down now, as journalists, special guests and non-technical team members are asked to depart. That leaves just the drivers, the start crews and the FIA officials.

The drivers will now be in the car having performed any pre-race rituals – Sebastian Vettel steps in from the left, for example. Engineers run last-minute systems checks, right down to ensuring mirrors are in the right position. 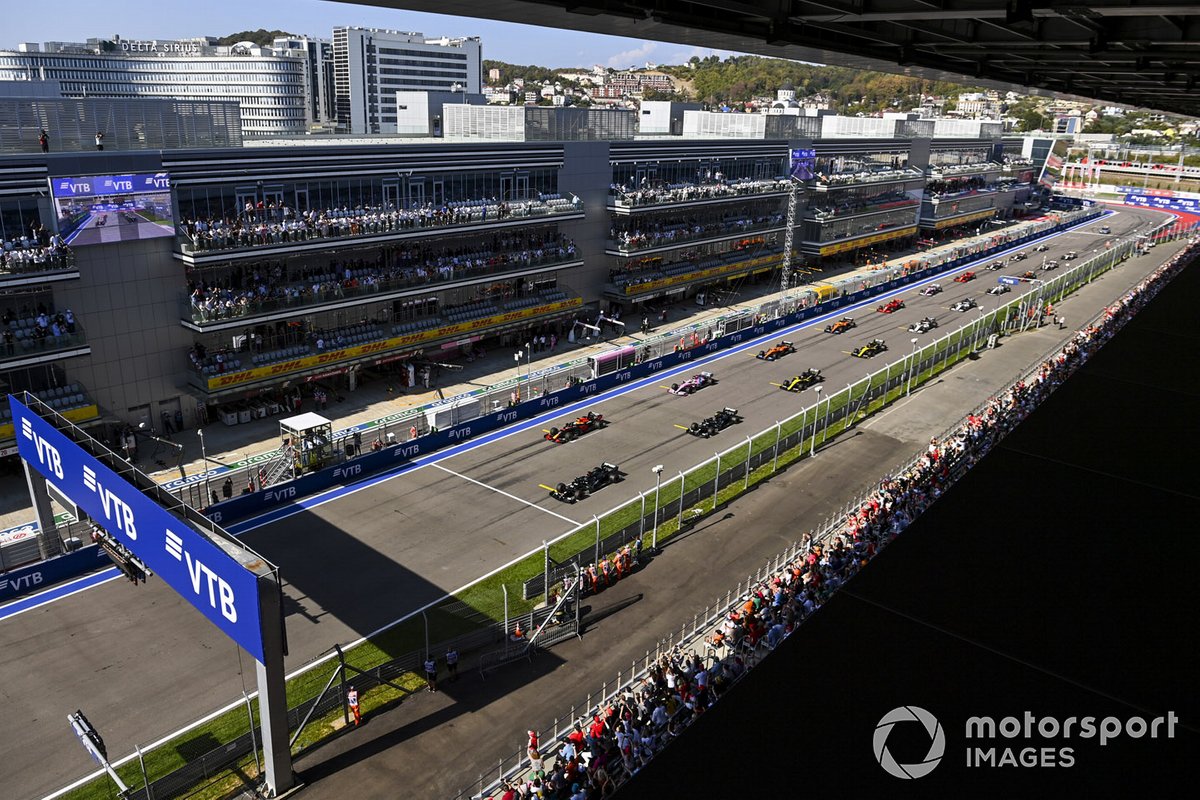 Five red lights on the gantry start the countdown to the race.

At this point, the wheels must be on and tyre blankets disconnected from power (but can still be left around the tyres). If this is not the case, teams get a penalty.

Non-essential team personnel and equipment trolleys must start to leave the grid, leaving no more than 16 per car on the grid with three minutes to go. On pit wall, the lead engineering team starts to assemble in front of a bank of timing screens and laptops.

On the one-minute signal, engines should be started, tyre blankets are removed and the cars are lowered from their stands.

All team personnel must leave the grid with no less than 15 seconds to go before the formation lap, taking all equipment with them. If any are still around the car, that car must start from the pits.

The green lights go on to start the formation lap, with all cars driving at pit lane limited speed until the pass the pole spot. As soon as the cars are off, the mechanics sprint back to the pits to get ready for any first lap incidents.

Inside the garage, rows of engineers are now focused on a huge array of laptops and screens showing data graphs, circuit maps with moving dots, gear lights and numbers, race TV feeds and team cameras in the pits. This is the hub of the team’s race control, and from the next hour and a half it will be very busy.

It’s not all go yet, and this one lap preparation is crucial for the race start. Drivers must stay bunched together and cannot overtake or do practice starts. They can weave to warm their tyres.

They perform a series of pre-start operations on cues from their engineers, such as selecting settings to heat the brakes and performing burnouts to get the tyres up to temperature. 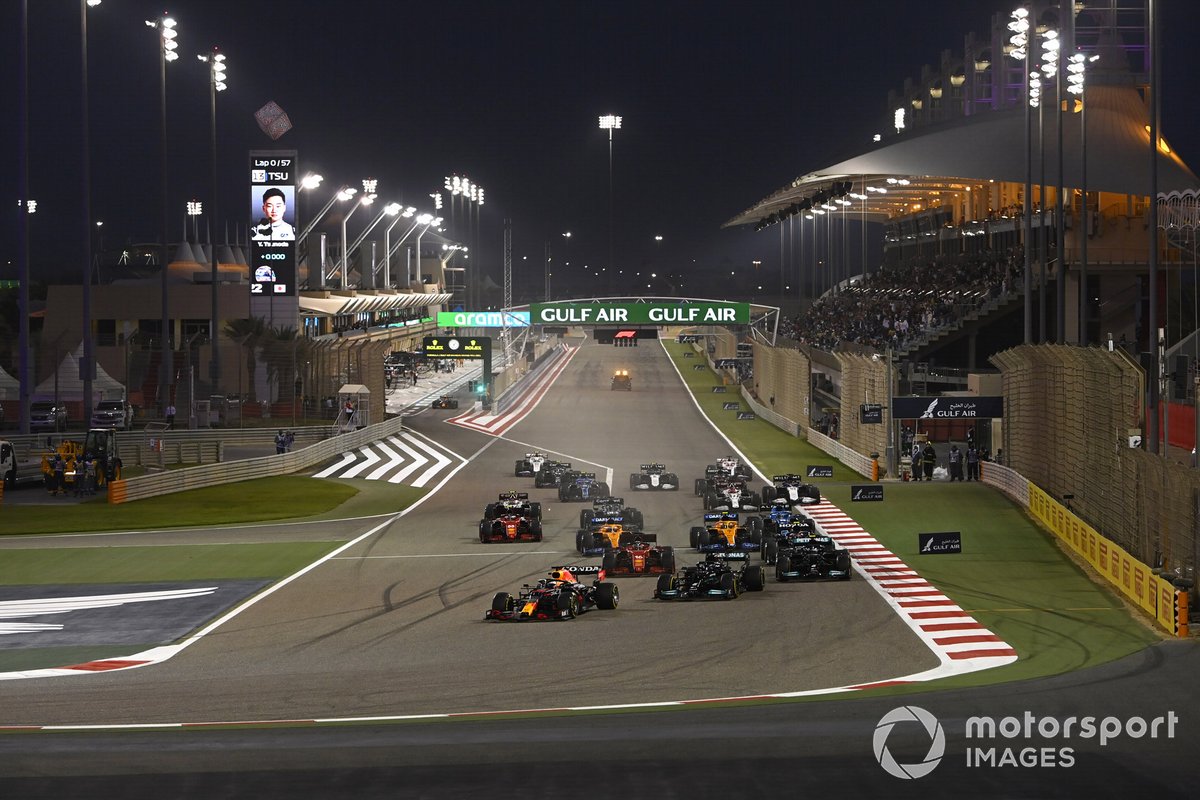 When the cars are lined up, the five red light start sequence is initiated. This was introduced into F1 in 1996 to reduce the risk of false starts. The previous red and green system often led to false starts when red went off and green was not yet lit.

This automated sequence is started by FIA Race Director Michael Masi after transponders in the cars have confirmed they are all in position. The lights go on one per second, giving drivers helpful cues as they carry out a start sequence.

The last one triggers a jump-start detection system and a pre-set but random interval then determines when they go off to start the race, making it impossible to predict and far less likely to get wrong.

As soon as the lights go out, as the great Murray Walker used to excitedly shout, it’s “go, go, go!”