Seven time world champion Schumacher, 43, has received some criticism for letting his friend and countryman Vettel overtake without a fight as the latter raced for his third consecutive drivers' world championship at Interlagos.

Vettel ultimately won the 2012 contest against Alonso - who was Schumacher's last championship rival of 2006 - by a mere 3 points. 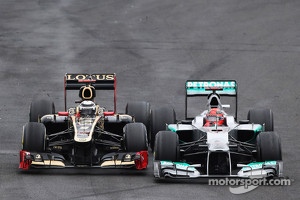 "Sebastian was faster and he (Michael) didn't want to get in the way and increase the risk for him," Ralf told German television ZDF.

"That's how fair sports people treat each other," he added.

Jaime Alguersuari, meanwhile, said the kind of help enjoyed by Vettel in Brazil is just part of F1.

"I would have liked to drive a Mercedes in Sao Paulo and let Alonso pass to help with his third world title," the former Toro Rosso driver, 2012 Pirelli tester and Spaniard told AS newspaper.

"I must remind you that F1 is also about engineering, political interests and money.

"Someday, Fernando can benefit from the same circumstances that benefitted Vettel," he added.

Massa cried after 'taking punches' in 2012