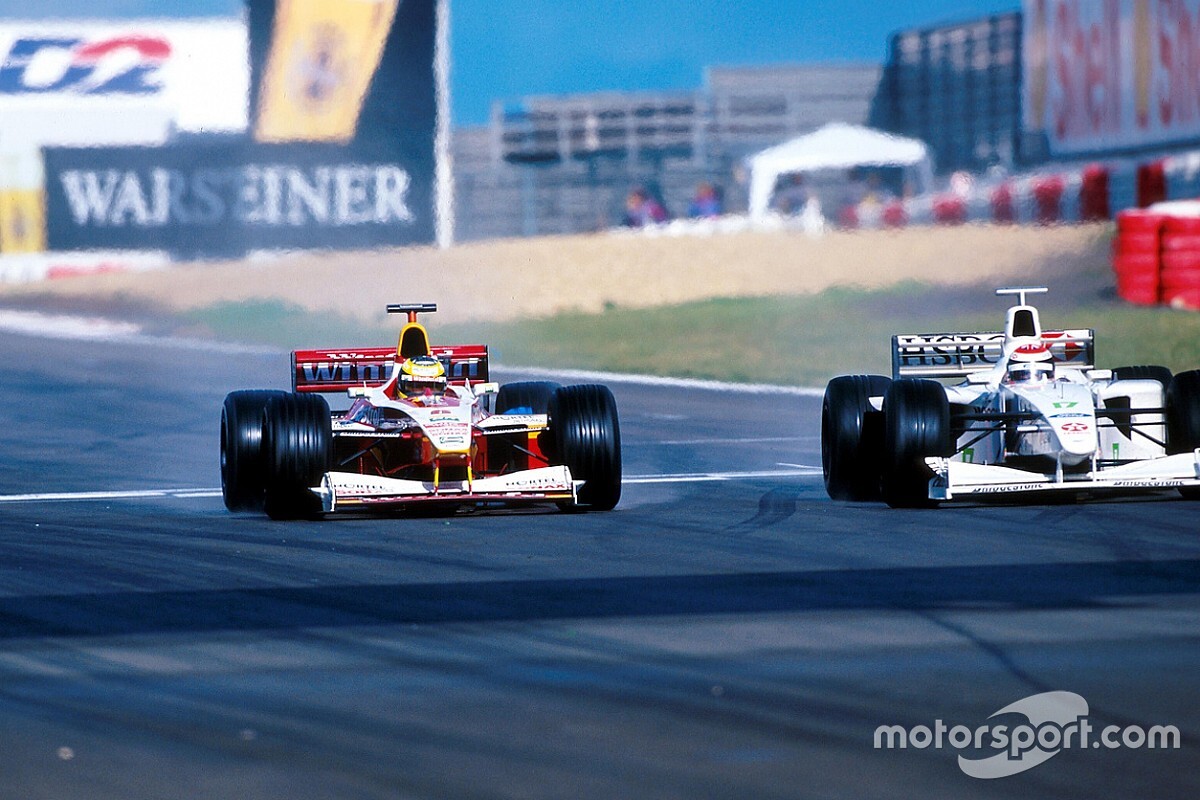 Whenever the name 'Schumacher' is uttered, few people immediately think of Michael's younger brother Ralf, a six-times GP winner in his own right. In Michael's injury-induced absence, he stepped out of the shadows in the 1999 European Grand Prix - which Formula 1 is live-streaming today - with a fine drive that quelled many doubters.

The Nurburgring has held more than its fair share of classic F1 races through the years, but few can match the drama of the 1999 European GP. It was a race with two rain showers, five leaders, and a number of incidents that often involved the man at the front of the pack.

In the end, Johnny Herbert was able to - literally - weather the storm to score the third and final victory of his F1 career. It also marked the only win for the Stewart team, which scored a double podium as Rubens Barrichello took third, lifting the Tartan-adorned cars to a lofty fourth in the constructors' in its final season before becoming Jaguar for 2000.

It was also a race that saw Ralf Schumacher come agonisingly close to his maiden grand prix victory - but nevertheless, turn in a display that earmarked him as so much more than "Michael's brother".

Ralf was flying the flag for the Schumacher family solo on home soil at the Nurburgring, just as he had done at Hockenheim earlier in the year following Michael's leg-breaking accident at Silverstone. He arrived in Germany after a fine second place finish at Monza two weeks earlier, trailing Jordan's Heinz-Harald Frentzen, which would stand as the Williams team's best result of the season.

Schumacher had been one of the breakout stars of 1999, his first with Williams after effectively swapping seats with Frentzen. Despite concerns about his Supertec-badged Renault engine being underpowered, Schumacher had been able to snare three podium finishes and, significantly, blow away two-time CART champion teammate Alex Zanardi.

"The only good thing about the car was the design," Schumacher would remember in last year's Beyond the Grid podcast. "It was a difficult year. When I joined the team it was clear. It was a 'special' car."

Even knowing the limitations of the Williams FW21, both Schumacher and Frenzten would have arrived at the Nurburgring with hopes of becoming only the second German to win in F1 on home soil, after the elder Schumacher's Hockenheim victory in 1995. In the absence of the fervent crowd's main man, both had a rare chance to soak up being the home favourites for the weekend.

For Ralf in particular, it was also a big chance to step out of his brother's shadow.

"He was a very talented driver, obviously always living in the shadow of Michael so it would have been hard for him personally, but he probably didn't know anything else," recalled Sam Michael, who worked as Schumacher's race engineer at Jordan in 1998 and would later reunite with him at Williams, in an interview with Motorsport.com earlier this year.

"Going from Jordan to Williams, it was much more at the business end of town. At Jordan, you were massively outperforming your expectations and budgets and everything else, so that was a great time because of that.

"But at Williams the expectations were definitely higher so you knew you had stepped up a notch in terms of facilities, what the expectations of the team were. Ralf fitted into that quite well actually. He was still a young guy."

Schumacher had a good run on Saturday in a wet qualifying, putting his Williams on provisional pole before being shuffled down in the final few minutes by the McLarens of David Coulthard and Mika Hakkinen. A late stunner from Frentzen gave him pole, delighting the home crowd. Schumacher was pleased with P4 all the same, calling it a "true gamble" in the damp conditions.

The race was put behind the safety car just moments after the start following a big crash that left Pedro Diniz upside down - but thankfully unharmed - despite his Sauber's roll-hoop being ripped off in the impact. Once the green flag was waved at the end of lap six, the leading quartet of Frentzen, Hakkinen, Coulthard and Schumacher were able to break away from the rest of the pack, led by Giancarlo Fisichella's Benetton in fifth.

Schumacher began to hassle both McLarens for position as clouds began to thicken over the Eifel mountains. After being forced to back out of an earlier move on Coulthard, the Williams driver managed to get side by side heading into the final corner before lunging ahead into Turn 1.

It was a move good enough to give him second when Hakkinen rolled the dice of taking wet tyres one lap later, while a mistake from Coulthard left Schumacher to close up alone on Frentzen. 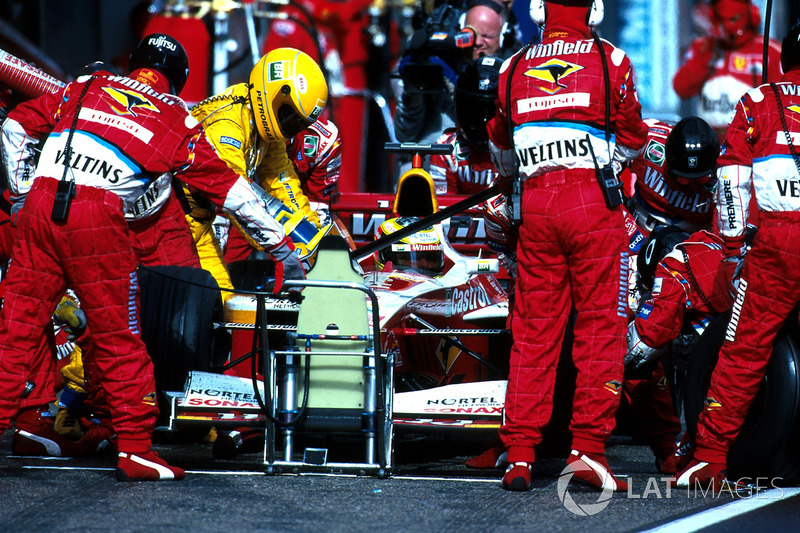 As the rain shower came and went, Schumacher headed to the pits for his first pitstop. It would cause him to lose second place to Coulthard, but with Hakkinen now out of the picture after his tyre gamble backfired, a podium looked to be the minimum result on offer.

Frentzen and Coulthard pitted together at the end of lap 32, emerging still first and second. But Frentzen's hopes of a second straight victory were quickly dashed when his car ground to a halt just one corner into his out-lap due to an electrical issue.

"It feels awful to drop out of the race when you are leading," he said. "Everything had gone so well for the first half of the race and the team did a fantastic job in the pits to get me out ahead of David but as I came out I seemed to have an electrical problem."

Frentzen's demise left Schumacher as the man being willed on by the crowd, especially in a fight against Coulthard. Even with Hakkinen out of the picture, McLaren looked set to take a big step towards sewing up the constructors' championship, with Ferrari's Eddie Irvine and Mika Salo both out of the points - the Ferrari mechanics having performed their best Keystone Cops impression during Irvine's 28s stop.

Ralf sat just a couple of seconds back, and was in real contention to claim a famous first win.

As the rain returned for a second time, Coulthard was able to stretch his advantage over Schumacher to almost 10 seconds as both tried to see out the rain shower and avoid pitting for wets. Just as the rain started to ease, Coulthard's five-lap run in the lead came to an end when he slid off the circuit at the first corner and hit the tyre barrier, ending his race on the spot.

It promoted Schumacher into a huge lead. The early gap the initial train of leaders had built over the rest of the field remained intact, meaning Schumacher was over 15 seconds clear. A mistake from second-placed Fisichella at the chicane saw the gap grow by another 10 seconds, meaning so long as Schumacher could keep his cool for the final third of the race, victory would surely be his.

Schumacher pitted for a second time on lap 44 as the sun beat down and dried the circuit, taking a set of slicks. He came back out in third behind Fisichella and Herbert, the latter pitting three laps later to switch back to dry tyres.

Fisichella was trying to make a one-stop strategy work, meaning Schumacher would have to overtake him to get ahead - only for the Italian to oblige with a spin that ended his day. Schumacher was now over 20 seconds clear of the field once again, but his lead would last a matter of moments.

Contact with a metal object on the track punctured Schumacher's right-rear tyre, causing him to run off-track in the first sector. He was forced to hobble around the circuit at slow speed before returning back to the pits, shaking his head furiously in the cockpit as the Williams mechanics fitted a scrubbed set of Bridgestones to get him back into the race.

While he was able to still pick up three points for fourth place, Schumacher knew that a big result had gone begging.

"I feel that I narrowly missed a good podium opportunity today," he said. "Of course it is good to have three more points under my belt, even if I can't stop thinking that it could have been 10..." 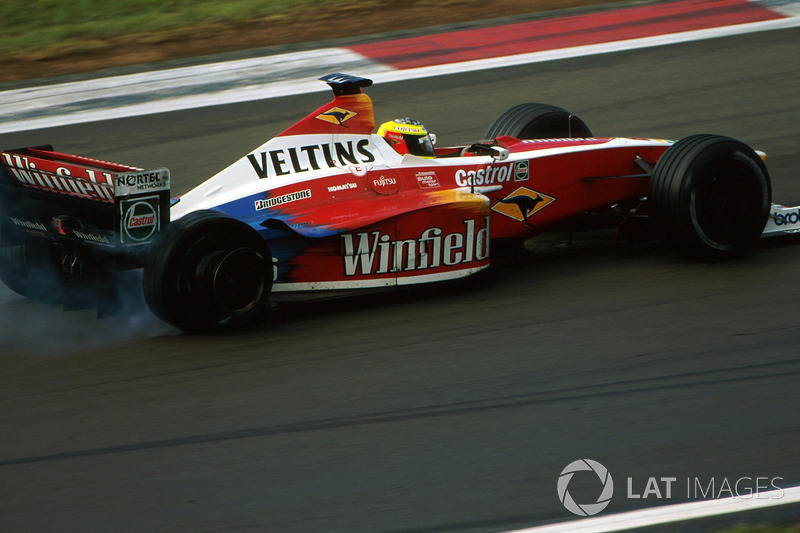 Despite the result, it was a display that proved Schumacher was a future grand prix winner. Had he won that day a couple of months after his 24th birthday, he would have become the sixth-youngest race winner in F1 history, just a few months shy of his brother's entry to the standings.

However, it would not be until the 2001 San Marino Grand Prix that Ralf would finally ascend to the top step of the podium.

"I remember Bernie giving me that silver-plated trophy [at Imola], and he said 'it was about time for you!'" Schumacher recalled. "I said 'yes, sorry it took a bit long, I know...' But that was about it. It's a strange thing, but it happens..."

Schumacher racked up a further five victories in F1, including back-to-back successes in the 2003 European GP and French GP over teammate Juan Pablo Montoya, which put him in the thick of the title battle - and ahead of Montoya. But two non-scores at Silverstone and Hockenheim meant he had dropped behind Montoya in the points when a test crash at Monza left him with concussion and forced him to miss two races.

Struggles with the walrus-nose FW26 in 2004 were compounded when he was ruled out for six races with spinal fractures sustained in an accident at Indianapolis, and a subsequent move to Toyota for 2005 effectively ended his spell as a top-tier driver.

He would score a surprise pole at Suzuka that year and notched three more podiums, but only scored five points in a disappointing 2007 season - once again the only Schumacher on the grid following Michael's retirement - before heading off to the DTM.

Just as on that damp day at the Nurburgring, the stars never quite aligned for Ralf Schumacher to take the fight to his brother for a world title.

The signs F1 can't ignore in its post-pandemic transformation