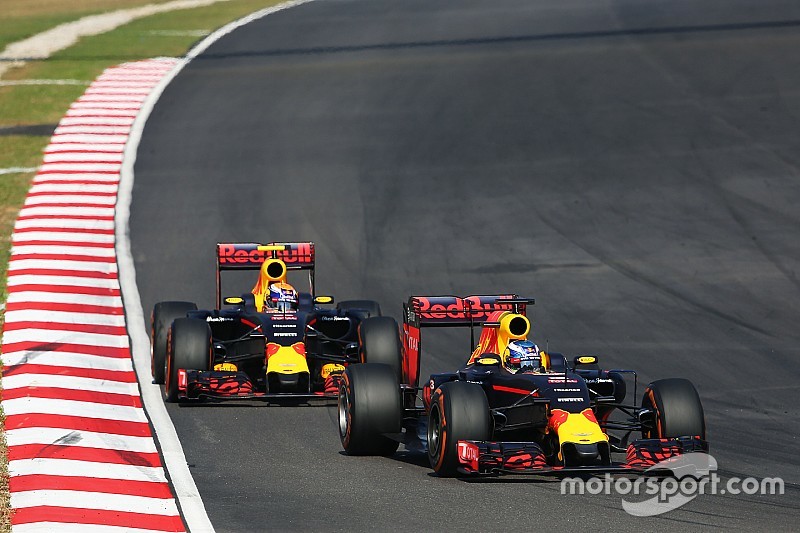 Red Bull boss Christian Horner thinks it would have been unfair to both his drivers to have imposed team orders at the Malaysian Grand Prix, as they battled it out for position.

Horner faced some anxious moments on the pitwall as the differing race strategies that Max Verstappen and Daniel Ricciardo were on meant they would be fighting each other for track position.

But on the two occasions when Horner could have been tempted to impose orders, he said priority was to keep it fair for both drivers.

The first time was when Verstappen was closing up on Ricciardo and still within then race leader Lewis Hamilton's pit window, so it would have been justified for Red Bull to ask the Dutchman to be let through so he did not lose time.

But speaking after the race, Horner said that the team decided to leave Verstappen and Ricciardo to their own devices because the battle with Hamilton was already lost.

"What had basically happened at this point, it was clear that Max was going to go to the end of the race on the hard tyre," explained Horner.

"With Daniel we had stopped on lap 21/22 and we were having some discussion with him about whether he felt he could get to the end.

"His initial response, around six/seven laps in was 'yes', he thought he could. So at that point they are fighting each other for track position.

"That was why there was no interference and the instruction was you are racing each other, just respect each other.

"It is what we talked about in the morning - just give each other space. There was some great wheel-to-wheel racing between the two of them, but at all times they respected all the hundreds of employees they represent."

When asked if that meant the team believed sticking ahead of Hamilton after his second stop was not a priority, Horner said: "We knew Lewis was going to stop and, if he had stopped with a new set of tyres, he would have come through anyway. So, at that point we are thinking if we win track position [it doesn't gain anything].

"What we were more keen on was watching what happened behind. And obviously if Daniel had lost a place to Max, we would have immediately pitted him to cover Nico [Rosberg] than be too exposed at the end of the race."

Once Hamilton was out of the race with an engine failure, Ricciardo's track advantage proved crucial, as it meant he was leading the race. And Red Bull knew that the best way to guarantee the win was to pit both its driver for new tyres.

After that, Red Bull could have been tempted to hold position to further seal its triumph, but Horner said again that he preferred to let Verstappen and Ricciardo battle it out.

When asked if he was tempted to ask them to hold position, Horner said: "No. I made the decision after that. I instructed both race engineers that they were free to race but make sure we prioritise 43 points. So ask the drivers to respect that.

"They did and I think from our perspective it was fine to allow them to do that. They were both in the same engine modes, both in the same power state – so there was no real advantage one way or another."

Although Verstappen appeared slightly frustrated after the race about missing out on the win, Horner said that the youngster was far from unhappy with how the team had played out the race.

"He is totally cool," said Horner. "Obviously he has given it his all and he has tried to win the race. The defining moment for our race was when they got side by side through Turns 5/6. It was good fair racing.

"They were both more than happy in the debrief. It is a long hot hard race and he was fine. Absolutely fine."