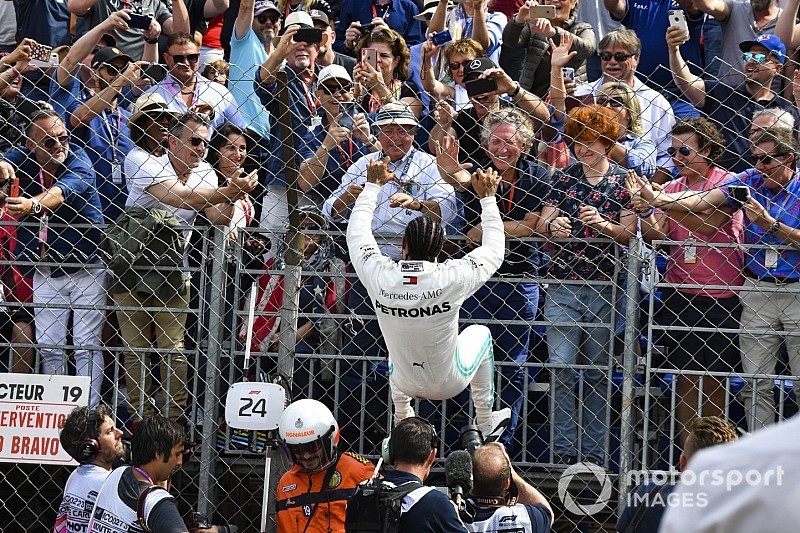 Mercedes Formula 1 driver Lewis Hamilton thought his celebration after landing pole position for the 2019 Monaco Grand Prix might go wrong as he scaled a fence to greet fans.

Hamilton had led teammate Valtteri Bottas through Thursday practice, but trailed both the Finn and Ferrari’s Charles Leclerc on Saturday morning.

He rebounded during the final segment of qualifying, turning the tables on provisional pole-sitter Bottas with a lap 0.086s faster.

Hamilton had an emotional outburst over the radio on his slowing-down lap, and once he was out of his car he launched himself onto a fence to celebrate with fans.

"I was just so super-hyped,” he said when asked by Motorsport.com to talk through that moment.

“I just tried to hold it in but there’s a lot of Brits and a lot of British flags, and I don’t know, it was just a spur of the moment thing. I felt the fence was going to come over actually! Luckily it didn’t.”

Hamilton said he wanted to let his feelings out because “great things happen and we don’t always celebrate them”.

“I’ve won races and you go straight into meetings and then you go home and watch TV or do normal stuff,” he said. “You don’t capture the moment. I think it was just important for me to enjoy it.

“You never know when that moment’s going to happen again so I’m just grateful for it.”

This week, Hamilton has also been coping with the death of friend and mentor Niki Lauda, Mercedes’ non-executive chairman, last Monday.

The world champion put his deficit to Bottas down to struggling to get enough heat into the Pirelli tyres to put in a complete lap at maximum pace.

He said his emotion was heightened by how tense qualifying had been and not knowing if his “ragged edge” lap was enough.

“I was waiting for a long, long time to find out,” he said. “I was like, ‘where the hell is Valtteri?’

“Talk about sitting on the edge of your seat when you don’t know what’s happening... But when you get that call, whether it’s good or bad, it’s horrible, the wait.

“Sometimes you get it and it wasn’t good enough and you start to reminisce the lap and think ‘I could have done better here’ but fortunately it was good.

“I’ve been with Bono [race engineer Peter Bonnington] seven years, it’s the longest relationship I’ve had with an engineer, so it’s really great to see his encouragement and his excitement as well.”