Furious Formula 1 CEO Stefano Domenicali has blasted protesters who broke onto the track in the British Grand Prix, saying “no one has the right to put lives in danger”.

The Just Stop Oil climate activist group has claimed responsibility for demonstrators who jumped the barrier by the bridge on the Wellington Straight at Silverstone and sat on the track.

The race was red flagged for the terrifying first-corner Zhou Guanyu shunt as then leader Max Verstappen came across the protesters before marshals arrived on the scene.

Northamptonshire police, who received "credible intelligence" on Friday that a protest might take place, issued a statement confirming that seven people have been arrested.

In response to the disruption, Domenicali has hit out at the protesters for their "completely irresponsible and dangerous actions" that "put lives in danger".

"The actions of a small group of people today were completely irresponsible and dangerous.

"We thank the police for their great work, and we shouldn't be complacent about the risk this posed to the safety of the drivers, marshals, fans and the individuals themselves."

The Italian had earlier told Sky Sports that while "you can protest whatever you want", events at Silverstone were "ridiculous to see… that is the minimum I can say." 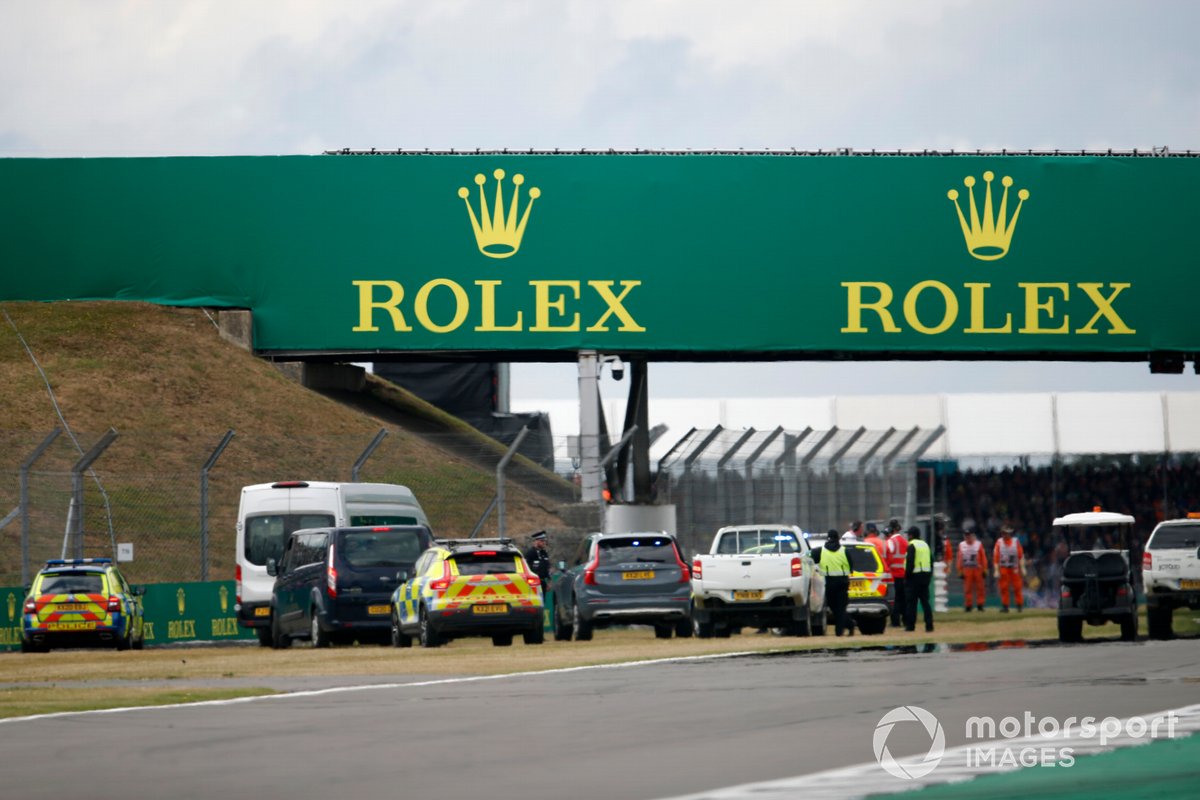 Police at the circuit dealing with potential protesters

However, drivers have given some support to the environmental cause of the protest even if they have condemned the method chosen.

Speaking in the press conference, podium-finisher Lewis Hamilton said: "I love that people are fighting for the planet and we need more people like them."

This was clarified by the team, with a Mercedes statement reading: "Lewis was endorsing their right to protest but not the method that they chose, which compromised their safety and that of others".

The seven-time champion then added on Twitter: "Please don't jump on to our race circuits to protest, we don't want to put you in harm's way."

Although some drivers said they were unaware of people on track on the first lap, Charles Leclerc - then running in fourth having been jumped by Hamilton - said: "I thought they were marshals, I think because they were in orange [t-shirts].

"Then I checked and there were written things there that I didn't read, because we were going too quick."

Alpine pilot Esteban Ocon added his concern that these types of incidents were increasing: "I was not too dangerous, the speed I was going, but I don't know if the guys saw them at the start being three wide or something like this.

"At the moment, we are seeing that a bit too much - the French Open, that's one of them that we saw. There's quite a lot in France that I saw as well, on the road, on the motorway.

"I mean, I understand some ideas, but this is risking their life. And that can't happen."

Mercedes still not "too optimistic" despite British GP victory challenge