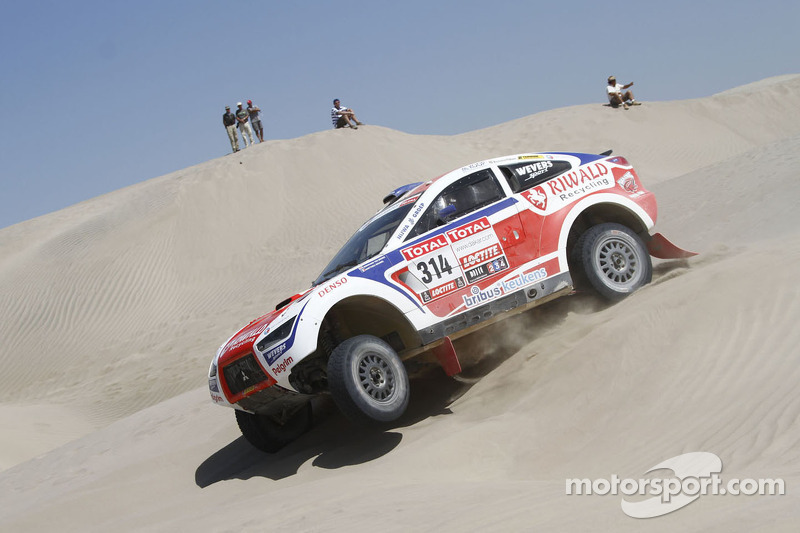 EL SALVADOR - The Dakar Rally 2014 is day after day a immense test. Now the finish is near in the participants had to overcome the longest special stage in the history of the Dakar on the 12th day: 605 kilometres of special stage and another 144 kilometres connection. The Riwald Dakar Team has once again underlined their qualities. Bernhard ten Brinke proved very fast with the HRX Ford and finished sixteenth. 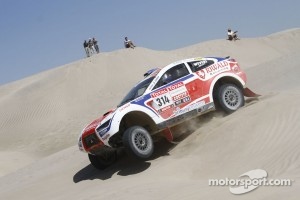 Ten Brinke reached the first waypoints in the top 10. A strong performance also because the trucks and cars started together. The HRX Ford driver opened behind two Kamazzen and just before Gerard de Rooy. It resulted in huge clouds of dust. Visibility was limited, so Bernhard hit something and the wheel had to be changed. A bit later the fesh fesh caused a second flat tire: an invisible stone ripped the tire the fast men had to pull aside for another change. When the duo continued they were overtaken by a wheel of the car. Puncture number 3 proved a fact!

Boring
After three new tires no spares were available, so Bernhard was forced to drive economically to the bivouac: "The length of the special stage was not a problem. The last part, when we had to drive a bit slower, was even a little bit boring. The dunes of Copiapo, which normally are reported as heavy, were quite easy. In total we met only five real dunes, the others proved nothing more than some minor bumps of sand!"

The location chosen in El Salvador at high altitude towers over the usual location of the bivouac in Copiapo. This start location will ensure that the Camanchaca, the morning mist which sometimes hinders the start of the stages, can be avoided. Sand will be featured on the route again, in particular with a big string of dunes to overcome at the end of the special stage. If dunes are present, there are chances to make the last big differences in this Dakar.

Speedbrain: On the way to the top ten