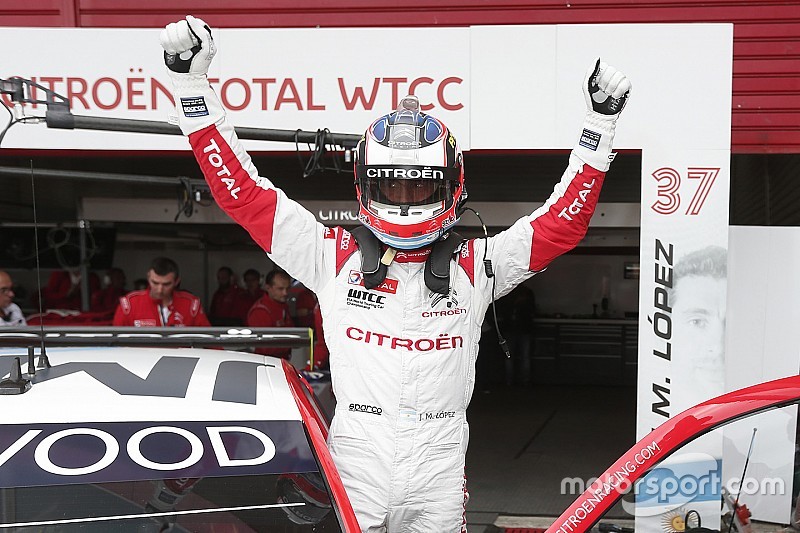 The Citroen driver finished comfortably ahead of ROAL Motorsport's Tom Coronel, with Rob Huff completing the podium for Honda.

Michelisz had a brilliant start in the Honda to got past Lopez, while Yvan Muller overtook Coronel for third.

Huff was now fifth ahead of teammate Tiago Monteiro and Sebastien Loeb Racing's Mehdi Bennani, while Esteban Guerrieri paid the price of a clutch issue and had a slow start from fifth, slipping down to eighth position.

Meanwhile, Lopez continued to attack Michelisz as Muller followed closely behind. The Argentinian tried to pass under braking after the back straight several times, and initially had pressure from his teammate, the two even briefly switching positions twice.

However, Lopez was soon told on the radio by the team not to worry about Muller, and therefore attacked for the lead.

The Hungarian put on a very good defensive drive until he was passed by both Lopez and Muller at the chicane on lap seven. The Honda driver tried to defend, but it played in the Argentinian's favour as he took the lead.

Michelisz had to cut the chicane and, at the following corner, both he and Muller flew into the gravel after having a light contact.

The Honda driver slipped down to eighth, while Muller lost three places and rejoined in fifth. Positions ahead steadied, with Coronel following Lopez from a safe distance with the two Hondas of Huff and Monteiro behind him.

Lopez eventually took victory ahead of Coronel, who also won the independents' classification, with Huff completing the podium.

Monteiro lost 13 points to championship leader Lopez as he finished fourth ahead, with Muller crossing the line fifth.

Guerrieri finished in sixth in the partly-repaired Campos Racing Chevrolet, with Bennani finishing seventh in the privateer Citroen ahead of early race leader Michelisz.

Lopez's championship lead is now extended to 117 points over Monteiro, with Muller now moving up to third in the drivers' standings, just seven points behind Monteiro heading to the next round of the championship at Motegi in Japan on September 4th.