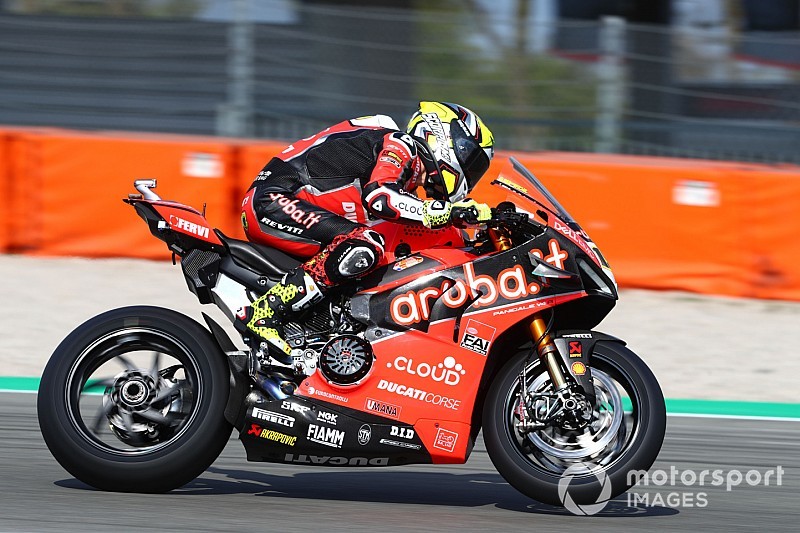 Alvaro Bautista kept his winning streak going in the postponed opening World Superbike race at Assen, where he took a lights-to-flag victory ahead of Jonathan Rea.

But the German started to fade in the second half of the race and was overtaken by four riders in quick succession, with Rea moving up to second.

Kawasaki rider Rea was unable to match Bautista's pace, who tripled his lead to three seconds between laps 7 and 15, and eventually won by 3.1s to score his 10th win of the season.

Rea also finished second for the 10th time in a row, with local hero Michael van der Mark of Yamaha completing the podium.

The Dutchman headed the second group of Alex Lowes (Yamaha) and Leon Haslam (Kawasaki) for most of the race, but was able to pull away from them late on, and was only 1.8s behind Rea in the end.

Lowes kept Haslam at bay for fourth, taking advantage of a mistake by the Kawasaki rider at Turn 7.

Reiterberger had to settle for sixth, followed by the second Ducati of Chaz Davies and Jordi Torres (Pedercini Kawasaki).

Toprak Razgatlioglu (Puccetti Kawasaki), who had been deemed unfit to race on Saturday after a qualifying crash, was able to contest the race and finished ninth ahead of BMW's Tom Sykes, who lost two positions on the final lap.

Hector Barbera (Orelac Kawasaki) had to pit and finished two laps down on his WSBK debut as Michael Ruben Rinaldi and Alessandro Delbianco both retired.