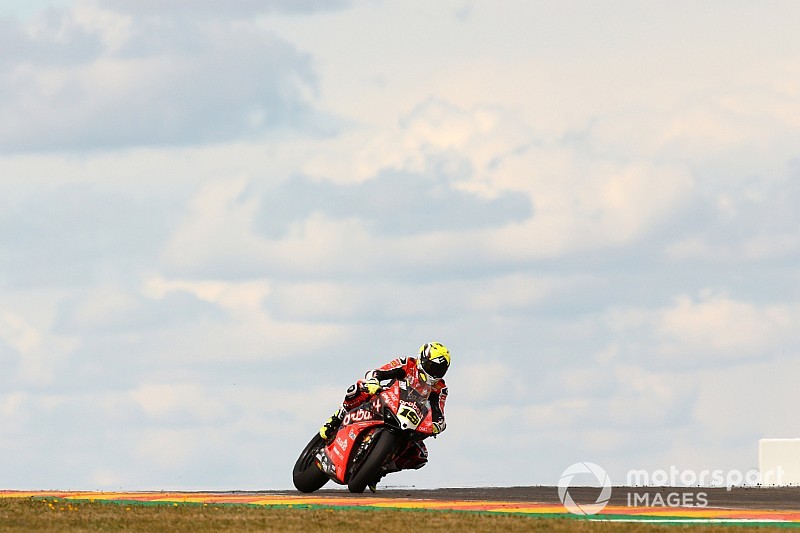 Alvaro Bautista took yet another dominant World Superbike victory in the Superpole race at Aragon as Jonathan Rea beat Alex Lowes in a thrilling duel for second.

Bautista had a good start from pole and rapidly pulled away from GRT Yamaha's Sandro Cortese, whose focus on the opening lap was on Lowes, the works Yamaha rider attacking and eventually passed the German for second.

As Cortese gradually fell back, Rea became Lowes' main challenger for the runner-up spot, making a successful move at Turn 12 on the fourth lap.

But Lowes fought back and slipstreamed past Rea on the back straight three laps later.

However, Lowes was then also unable to pull away and had to surrender second place to Rea on the penultimate lap, the Northern Irishman continuing his streak of eight consecutive second-place finishes this year.

He ended the race 5.7s behind Bautista, who was once again in a class of his own at the front.

Lowes took third for the fourth time in the last five races as Bautista's Ducati teammate Chaz Davies finished fourth, closely following the duo of Rea and Lowes but unable to mount a challenge.

Cortese had to settle for ninth in the end, followed by Toprak Razgatlioglu (Puccetti Kawasaki).

Michael van der Mark and Michael Ruben Rinaldi collided at Turn 1 after the start and the latter was sent to the medical centre, while the former carried on after losing nearly a minute.