Nissan power takes top seven positions at Interlagos, and the first win of the season for the No.26 G-Drive Racing crew of Roman Rusinov, Mike Conway and John Martin

Nissan power took the top seven positions in the LM P2 class of the ‘6 Hours of Sao Paulo’ yesterday. The fourth round of the FIA World Endurance Championship produced the first win of the season for the No.26 G-Drive Racing Oreca Nissan of Roman Rusinov, Mike Conway and John Martin. 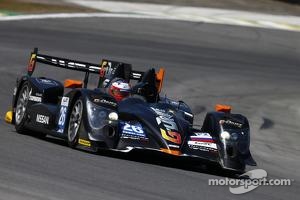 The Interlagos track often produces closely-fought drama-filled races and the 6 Hours of Sao Paulo didn’t disappoint. After just 25 laps of racing the first lengthy safety car period began while barrier repairs were made following an accident for the LM P1 Toyota and an LM P2 Lotus. Then, only another hour into the race the safety car had to come out again when one of the AF Corse Ferraris caught alight in spectacular fashion.

Throughout the drama Mike Conway was onboard the No.26 Oreca Nissan, doing a very slick job at the head of the LM P2 class. As the race unfolded Roman Rusinov was up next and then John Martin jumped in for the run to the flag. The team’s strategy had been to control the race from the front and their strategy was awarded with race victory.

“It was important for us to control the race from the front,” said Roman. “The two safety cars in the first half made it tough to call as you have to decide if you will alter your strategy at that point. I had my helmet on and then off again three times! Our package was very competitive all weekend and with the great work from all of the team we finally hit our mark and we are very happy to come away from Brazil as the winners.”

The No.35 Oak Racing Morgan Nissan of Bertrand Baguette, Martin Plowman and Ricardo Gonzalez took the runner up spot in Brazil after a strong performance, followed by the No.49 Pecom Oreca Nissan, grabbing the final spot on the podium. With four further Nissan-powered cars behind the podium finishers it was a great day for Nissan.

The next event of the FIA World Endurance Championship takes place in just three weeks time at the Circuit of the Americas in Texas, USA.

It was a busy weekend for two of the Nismo Athletes, Wolfgang Reip and Mark Shulzhitskiy, who were on track in Malaysia for the first race of the newly-created Nismo Athlete Global Team.

The race of choice was the Malaysia Merdeka Endurance Race, also known as the Sepang 12 Hours. Wolfie and Mark joined young Japanese driver Katsumasa Chiyo in a newly-built Nissan GT-R Nismo GT3, the car that is of course very familiar now to the Nismo Athletes.

The 12-hour race began at midnight on Sunday and it was Chiyo who took the start from sixth position on the grid as he knows the Sepang track very well. Unfortunately just one hour into the race the GT-R had to pit for repairs after a problem with a wheel. Shulzhitskiy jumped in next but after losing 30 minutes and tumbling down the order to 30th place, they would spend the rest of the race playing catch up.

Focused on a top ten finish the team set about it’s task and all three drivers put in impressive lap times while the team made sure that every pit stop was as slick as a Super GT stop! When dawn came they had climbed all the way back to sixth place and despite the rapidly rising temperatures they finished the race in a very creditable sixth place.

"I enjoyed the race,” said Shulzhitskiy. “It is one of the best I have ever competed in. Teaming up with Chiyo, a great driver, was a great pleasure. I learned a lot in this race and hope to leverage this experience for the three races I have left this year."

The driver exchanges don’t all go East with the Nismo Exchange. Later this month Japanese Super GT racer Kazuki Hoshino - Lucas Ordonez’ team mate at the Suzuka 1000kms – travels to Germany to take part in the Nurburgring 1000kms, the final round of the 2013 Blancpain Endurance Series.

The Japanese driver will compete in the No.23 JRM Racing Nissan GT-R Nismo GT3, taking the place of Lucas Luhr who is on American Le Mans Series duty that weekend.