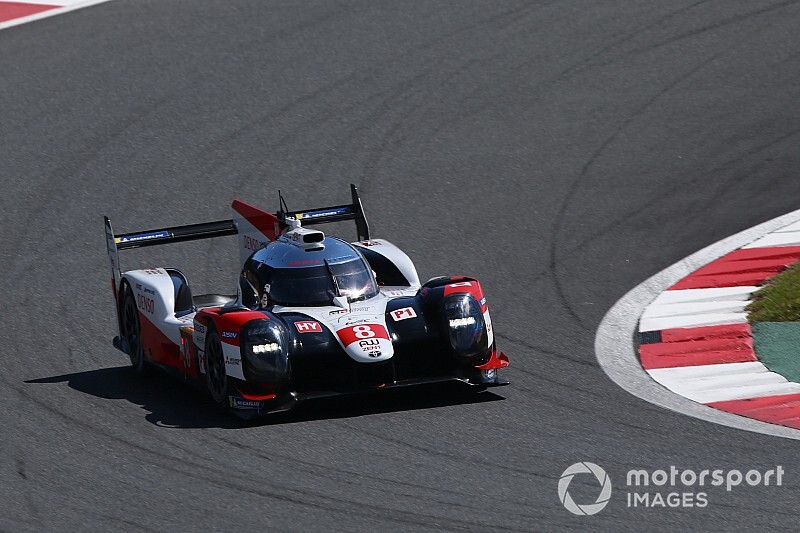 Hartley posted a 1m25.621s early in the one-hour session at the wheel of the quicker of the TS050 Hybrids, bettering teammate Kazuki Nakajima's Friday benchmark by 0.002s.

Jose Maria Lopez was initially half a second off the pace in the sister #7 car, but a subsequent improvement from Kamui Kobayashi - who was vocal about the effect the LMP1 handicap rules had on his car's performance on Friday - narrowed the deficit to 0.206s.

Rebellion Racing's solo R-13, second-fastest in both Friday sessions, was bumped down to third for the first time this weekend, 0.501s off the pace in Gustavo Menezes' hands.

The two Ginetta G60-LT-P1s completed the LMP1 order, with Mike Simpson setting the best time for the factory Team LNT squad of 1m27.039s in the #6 car, 1.418s off the pace and some six tenths clear of Ben Hanley's best effort in the #5 machine.

Racing Team Nederland topped the times in LMP2 courtesy of a 1m20.008s effort from Nyck de Vries, who will test the Toyota TS050 Hybrid in the WEC rookie test.

The TDS Racing-run RTN Oreca was a little under half a second quicker than Anthony Davidson in the JOTA Sport Oreca, the best of the Goodyear-shod cars, while Nicolas Lapierre was third-fastest in the Cool Racing Oreca, almost a second slower than de Vries.

Aston Martin filled out the next two positions in class, with Nicki Thiim's best time putting the #95 Vantage GTE second ahead of the #97 car by half a second.

Splitting the two Astons overall were no fewer than four GTE Am cars, the fastest of which was the #77 Dempsey-Proton Porsche driven by Matt Campbell.