Francois Perrodo says the #83 AF Corse crew proved beyond doubt that it is the best team in GTE Am following its convincing run to the title in the FIA World Endurance Championship finale in Bahrain.

AF Corse won four of the six races in the recently-concluded WEC season, including the Le Mans 24 Hours, scoring nearly 60 more points more than its nearest competitor TF Sport in the standings.

It marked the second GTE Am title in a row for Perrodo and Nicklas Nielsen, who were joined in the #83 Ferrari 488 GTE this season by up-and-coming Italian racer Alessio Rovera.

Last year, Perrodo, Nielsen and Emmanuel Collard were able to overcome an eight-point deficit to TF Sport Aston Martin trio Charlie Eastwood, Jonathan Adam and Salih Yoluc after all Vantage runners had to undergo a brake change in Bahrain.

But Perrodo says the #83 AF Corse crew didn’t need misfortune to strike its main competitors this year, saying the team showed it can win the title on raw pace alone.

“Last year obviously was an amazing season to clinch the title but to be honest we had a little bit of luck in the last race and we finished P3 at Le Mans,” he said.

“And this year with Nicklas again and Alessio, who is a fantastic driver, we won Le Mans, won four out of six races and won the title.

“So I think we wanted to confirm that we had the potential to really be the best and we proved and I couldn't be prouder than today with Nicklas, Alessio, the whole team, the engineers, Amato [Ferrari, AF Corse founder], who trusted me, so it's fantastic. I’m really over the moon.” 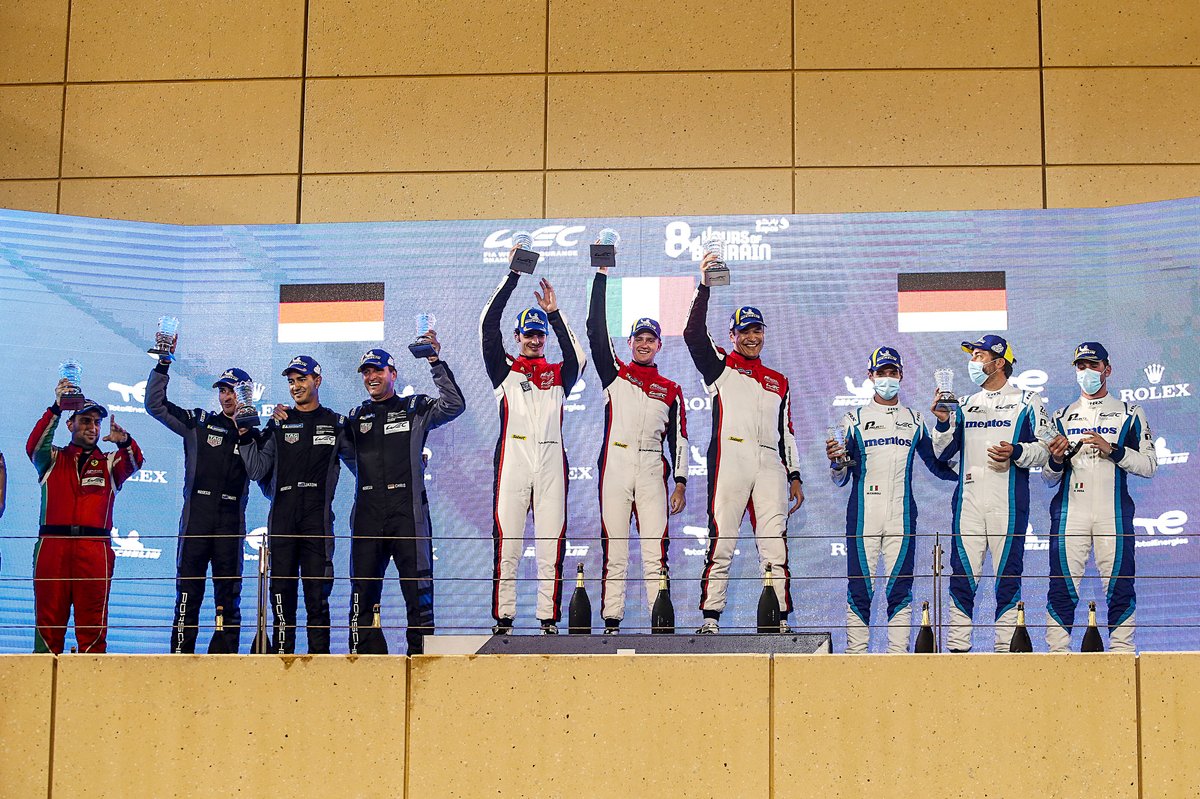 The drivers in the #83 AF Corse headed into the Bahrain race with one hand on the championship trophy, having built a 21.5-point lead over Ben Keating, Felipe Fraga and Dylan Pereira in the #83 TF Sport Aston.

TF's already slim title hopes were dealt a fatal blow when Keating was involved in an opening lap collision with Paul Dalla Lana in the #98 Aston Martin, before a separate incident with the other AF Corse Ferrari forced the car into retirement.

Ultimately, this would not have any impact on the title fight, as Perrodo, Nielsen and Rovera were untouchable out front, lapping the entire GTE Am field en route to victory.

“I took the car in a leading position and I basically had to bring the car home,” said Nielsen. “The car has been amazing the whole season, not only this race but even last weekend [in Bahrain 6 Hours] despite the 45kg [of extra weight due to Balance of Performance], we did a fantastic job.

“Obviously, this week with a bit less kilos on the car and cooler weather we managed to put everything together.

“We can be really proud of this achievement and as a team as well and the mechanics and the engineers have done a fantastic job to prepare for this race and make us fight for the championship and the win.”

Perrodo and AF Corse will move up to the LMP2 class next year with an Oreca 07, along with Nielsen and Rovera.

AF Corse will also partner Ferrari on its return to Le Mans’ top category with a Le Mans Hypercar in 2023.