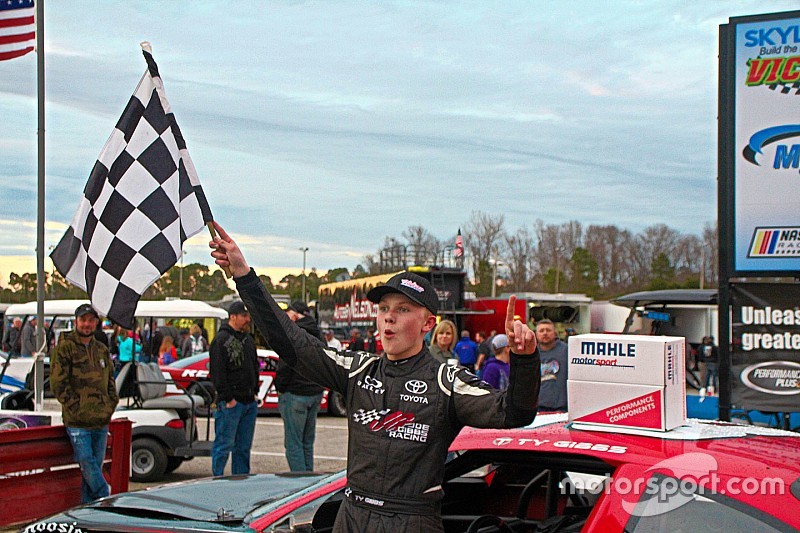 Joe Gibbs Racing’s first victory of the 2019 season came from its youngest member.

Ty’s win – his third in Late Model stocks and first of the year – came just over a week since an emotional memorial service was held for his uncle, J.D. Gibbs, at Davidson (N.C.) College. J.D. Gibbs died Jan. 11 after a four-year battle with a degenerative neurological disease.

“It just means a lot to get this win,” Ty Gibbs told Race22.com. “This is for J.D., too. He’s up there, he’s probably smiling, too, on some type of race track up there.

Gibbs is scheduled to run a partial NASCAR K&N Pro series schedule in addition to a partial ARCA schedule this year in 2019. He also plans to run in the CARS Late Model Stock Tour. He finished eighth in the series standings last year.

Joe Gibbs was on hand for his grandson’s victory.

“J.D. really pulled our race team. He spent 27 years there. We want to do everything we can to continue racing,” Gibbs told Race22.com. “It looks like Ty will be the one grandson that will want to race for us.

“That’s exciting for us, for the whole family.”

The track is on the K&N Pro Series East schedule. Series drivers and teams are not allowed to test privately at tracks that are on the schedule. Gibbs and Gilliland are appealing the penalty.