Wallace third at Indy: "What the hell? Somebody can drive" 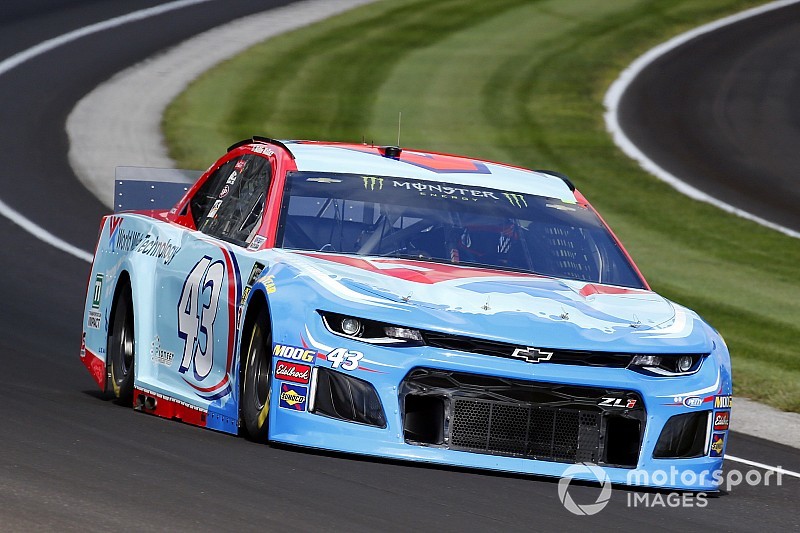 Bubba Wallace didn’t win the Brickyard 400 or qualify for the Cup Series playoffs but still had plenty of reason to celebrate.

Wallace had his best all-around weekend of the season, as his No. 43 Richard Petty Motorsports Chevrolet showed plenty of speed in practice, qualifying and throughout Sunday’s race.

While Kevin Harvick was basking in his second career Brickyard 400 victory after the race, Wallace was getting wrapped in a bear hug from his team owner following his season’s-best third-place finish.

Asked how his race played out as well as it did, Wallace deadpanned, “I don’t know, not supposed to happen according to Twitter. I’m supposed to run 25th to 30th all week and crash cars.

“The King came down and gave me a one of those big bear hugs – I haven’t had one of those hugs since the (Daytona) 500 last year. You know it’s a special day and a special weekend when he’s excited and he’s not sitting on the plane already waiting on us.”

Wallace started 15th – his fourth-best qualifying effort of the season – but nearly got into trouble when he got ensnared in a pile-up on pit road just 12 laps into the race.

The damage compared to many others involved in the incident was minor and Wallace was able to slowly work his way to the front.

By Lap 135 of 160, Wallace had cracked the top-five. He moved into third with 20 to go but could never catch Harvick or second-place Joey Logano.

“We had speed since we unloaded here and with this package it kind of even the playing field out and we were able to capitalize. A lot of guys wrecked out early. It was a super-long race,” Wallace said.

“What a hell of a day for all of us, going from the lowest of lows almost to the highest of highs. I knew we didn’t have anything for (Harvick) or (Logano) or really (Ryan Blaney) but with this package you’re able to kind of manipulate the air.

“It was just a solid day for our team. Smaller organizations having big runs. It is very uncommon these days. Almost like David and Goliath. Everything kind of clicked today for us. These little teams aren’t supposed to run with the big teams.

“What the hell? Somebody can drive.”

Promoted: Blink of an Eye, From Triumph to Tragedy premieres 9/12