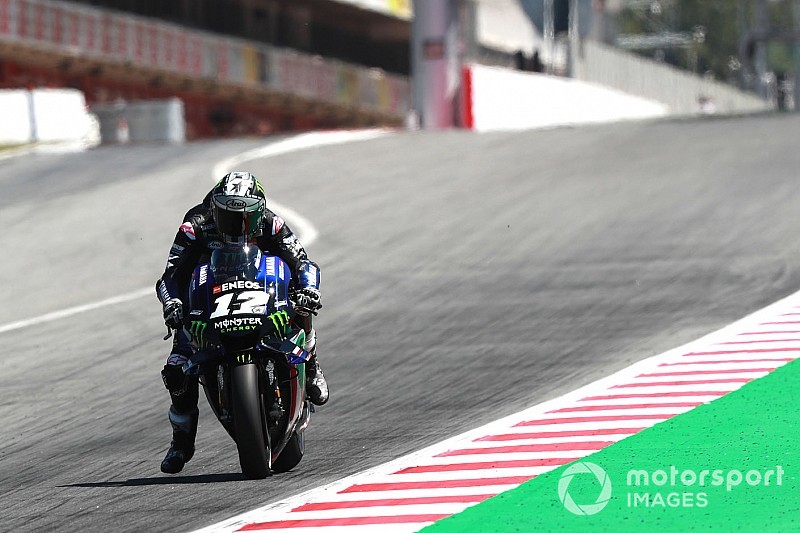 The session was red-flagged briefly in the morning after Jorge Lorenzo crashed at Turn 8 and his Honda – which was fitted with the carbon fibre-wrapped chassis – landed on top of the barrier.

He went to the medical centre for checks, but returned to the track to complete 65 laps, ending up 17th with a best lap of 1m40.357s.

Alex Rins stood at the top of the timesheets when the session was halted after his early effort of 1m39.618s, and remained unchallenged on the Suzuki into the early afternoon, with Marc Marquez trailing him by 0.017s.

At around 2:30pm local time, Marquez crashed at Turn 4, but was unharmed and returned to the session to continue evaluating two 2019-spec RC213Vs, as well as last year's version.

Fabio Quartararo, who scored his maiden MotoGP podium on Sunday, shot to the top of the times not long after Marquez's crash with a 1m39.428s.

However, the Petronas SRT rider would soon be deposed by Marquez by two tenths. Marquez's 1m39.257s stood as the benchmark until the closing stages, when Vinales usurped him by 0.087s.

Morbidelli grabbed top spot away from Vinales in the closing moments with a 1m39.014s, but the works Yamaha man edged ahead by 0.047s on his 98th and final tour at the death to end the second in-season test of the year fastest of all.

Marquez packed up after 80 laps and was third, with Rins – who tested a new chassis - holding onto fourth ahead of Catalunya poleman Quartararo.

Pramac's Francesco Bagnaia was top Ducati runner in sixth, 0.499s off the pace, but had his day interrupted by a crash at Turn 13 as the session entered its last two hours while on a quick lap.

Takaaki Nakagami sampled the '19 Honda for the first time in Monday's test, with the LCR rider seventh from Suzuki's Joan Mir, Jack Miller [Pramac] and his LCR teammate Cal Crutchlow.

Works Ducati duo Danilo Petrucci and Andrea Dovizioso trialled a new aerodynamic update on the screen of their Desmosedicis, while the latter tested a new chassis.

The were 11th and 12th respectively at the chequered flag, with Avintia's Tito Rabat, Valentino Rossi on the sister works Yamaha and KTM duo Johann Zarco and Pol Espargaro falling in behind.

Dani Pedrosa made his public track debut as a KTM test rider, and completed 51 laps aboard the RC16. A best lap of 1m41.824s put him 25th and last on the timesheets, 0.395s behind HRC test rider Stefan Bradl.