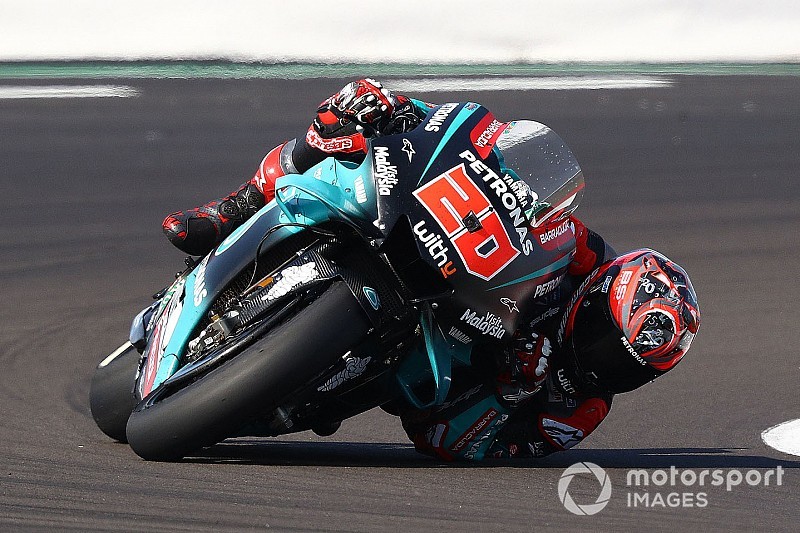 Petronas Yamaha MotoGP rider Fabio Quartararo says his qualifying in Silverstone was compromised by a warning light scare on what ended up being his fastest lap.

Quartararo had swept the first three practice sessions of the weekend, ending FP3 with a new all-time MotoGP lap record for the iconic British venue.

But while Marc Marquez lowered the record further as he dominated qualifying, Quartararo came up short of his previous benchmark and had to settle for fourth on the grid.

On the first flying lap in Q2, the French rookie had noticed a flashing warning light - and while Quartararo didn't elaborate what it had signified or how it had affected his Yamaha, he admitted it had knocked his confidence.

"I had an alarm on my dashboard - I say 'okay, I finish my lap', because I needed to make at least one lap," Quartararo explained.

"Even if you think that you are full gas, when you see these lights you are not really confident on the bike. I still managed to get a really good laptime but I was, let's say, a bit scared when I see the alarm."

The unspecified technical issue meant Quartararo had to change bikes ahead of his second run, and the team ran out of time to replace the soft front tyre equipped on the second Yamaha M1.

Having used the medium front on his initial run, Quartararo came up 0.021s short of bettering his laptime on his attempt with the soft front.

"I was not feeling really good with the soft front tyre, and also we never really try it, we try it in FP1 and was not the best feeling, so for this I'm happy that I make more or less the same laptime as before."

Asked if the front row or even pole had been possible, he said: "The first row I think yes, because we are like 0.002[s off] and in this lap I make many mistakes.

"For the pole, Marc did an incredible lap. The pole we never know, but for the front row I think that we could reach [it] if all was okay [with the bike]."