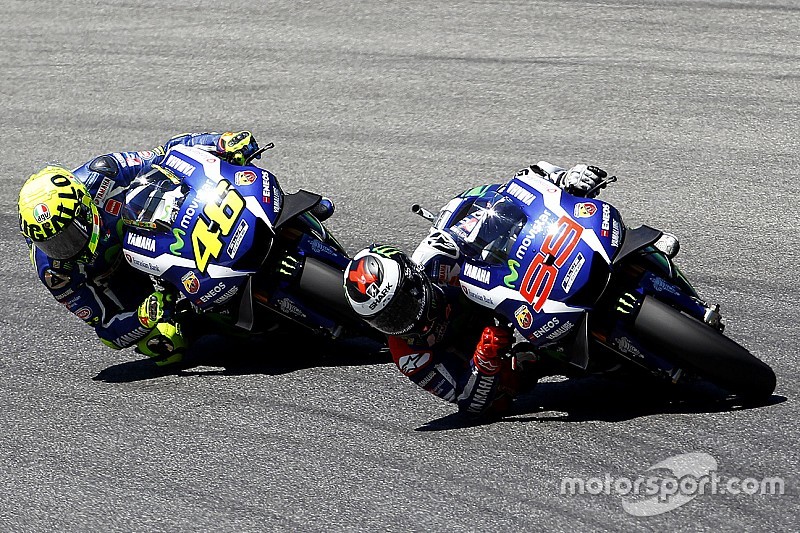 Jorge Lorenzo has described himself as “very lucky” to have come away from the Italian Grand Prix at Mugello leading the MotoGP points standings.

The reigning champion edge Marc Marquez in a thrilling last-lap battle on Sunday to stretch his advantage at the top of the table from five to 10 points, while Yamaha teammate Valentino Rossi was ruled out of a potential three-way fight by engine failure.

Lorenzo, who is now 37 points ahead of Rossi, suffered a similar issue hours beforehand in warm-up, but had a fresh engine fitted for the race.

He admitted he was fortunate that the problem did not occur in the race as it did for Rossi, and that he managed to outdrag Marquez at the finish, having exited the final corner in second.

"We've been very lucky about the engine," Lorenzo conceded. "[If I had done] one lap less in the warm-up, we wouldn't break [down] in warm-up but in the race with the same engine.

"Rossi was very unlucky, and he's now quite far [behind] in the championship.

"[We were] quite lucky also that with the slipstream we won the race, because it's not the same to arrive at Montmelo [Barcelona] on the same points as Marc than having these 10 points."

Lorenzo added he was in little doubt Rossi would have been a factor in the fight for the win before he was struck by his engine problem: "He was very unlucky because he had a good pace.

"Wilco [Zeelenberg, Lorenzo's track analyst] told me on TV he looked quite comfortable [following], so maybe he could stay there and fight for victory.

"He's been very unlucky, because now the distance in the points [between us] is huge."

Marquez "there" in the fight

Despite being beaten by just 0.019s by Lorenzo in the drag to the finish line, Marquez said he was relaxed about dropping only five points at one of his adversary's best tracks historically.

"We are there in the championship, 10 points is not a big distance," said the Honda rider. "Of course I would like to be in front, but we are there.

"If you told me before the race I could finish second and only lose five points [to Lorenzo], I'd ask 'where do I need to sign?'"

He added: "Valentino was unlucky, but in the end you have to take profit of this because you don't know what will happen in the future – if this luck will come back to him or not."