Espargaro concerned Aprilia "not improving" in 2019 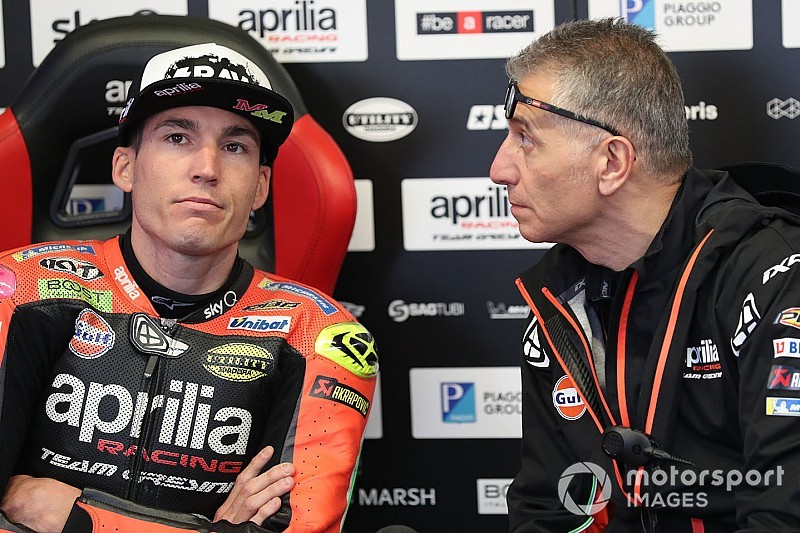 Aleix Espargaro has asked for more help from his Aprilia MotoGP team, as he believes there's “nothing more I can do” until the RS-GP bike improves.

But while Espargaro was initially happier with the 2019 specification of the RS-GP, results have plateaued since the start of the campaign, culminating in a Le Mans showing that the Spaniard described as “really painful”.

Espargaro has expressed hope of a better showing at the next race, Aprilia's home grand prix at Mugello, but stressed the team desperately needs to improve “the grip on the first part of the acceleration”.

“Mugello, I think it's one of the most important races for the team because it's our home GP, I will try to be positive, I will try to do my best as always, but we are in one point that it's not just about the rider,” Espargaro said.

“It's nothing more than I can do. I'm super focused, riding good, but I can't go faster, so I need some help.

“I hope that the positive vibes of the home GP for Aprilia will give me some extra tenths.”

Coupled with what Espargaro termed as a “super job” by his brother Pol to score a sixth-place finish for KTM in Le Mans, Aprilia's poor showing at the French circuit has seen it drop to last place in the manufacturers' standings.

Espargaro, who has a deal with the Italian firm through to the end of 2020, said last year that he couldn't tolerate another poor campaign – and currently admits he feels Aprilia is being left behind by its rivals.

“We need to do one step forward in terms of competitivity," he told Motorsport.com. "We saw our rivals improving a lot, the bike, and we are not improving, the bike is exactly the same as first part of the season or even the winter test.

“I can't do any more. I can't go faster. I try to do perfect weekend every time, I was fast in dry, in wet, but there is a limit, I cannot go faster, so I need help from Aprilia.

“My feeling is that it's coming from the engine, we need to have a little bit less sharp engine, more power in the bottom, to be able to use a lot more calm engine and not lose performance, but it's not that easy.

“And I'm sure that Aprilia is working hard, but also our rivals, they are working hard and quicker than us.”

Can Lorenzo pull off another MotoGP comeback?

Ducati: "No sense" to move Bautista away from WSBK