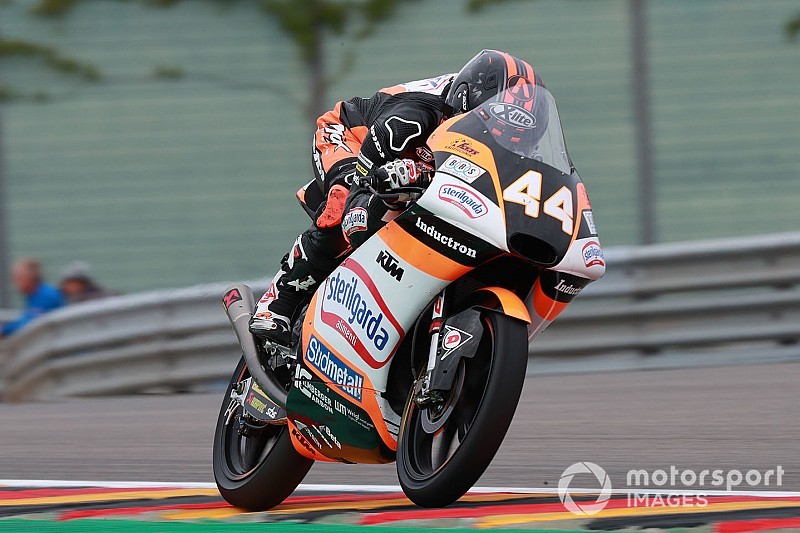 Aron Canet took the Moto3 championship lead by winning at Brno after gaining three places on the last lap.

Snipers Honda duo Romano Fenati and Tony Arbolino led the first half of the race but the status quo was ended when Jaume Masia nearly hit Arbolino at Turn 1, shaking up the order.

Lorenzo Dalla Porta shot up to the lead from seventh in one lap, and then spent most of the time in first until the finish, holding the advantage at the start of each of the last five laps.

But Dalla Porta was overtaken by both Arbolino and Canet at Turn 3 of the last lap.

Canet then also pulled off a move on Arbolino and managed to pull away as Dalla Porta rejoined the fight, the Max Racing KTM rider crossing the line first by 0.159s.

Antonelli was the hero of the race after he lost his third-place grid position due to a bike failure and started from the pits, but still recovered to the top five.

Ai Ogura (Honda Team Asia) and Andrea Migno (Bester Capital) were sixth and seventh with Fenati settling for eighth, despite fighting for the win early on.

The race had several crashes, the first of them being John McPhee, who got off the line slowly and was hit violently from behind by debutant Yuki Kunii.

Kunii was briefly knocked unconscious after the hit, while McPhee was taken to the medical centre with leg pain, but wasn't diagnosed with any serious injuries.

Gabriel Rodrigo missed the race after he fractured his right collarbone and pelvis in an FP2 crash.