Untold story: How Le Mans-winning Ferrari's glory almost got away 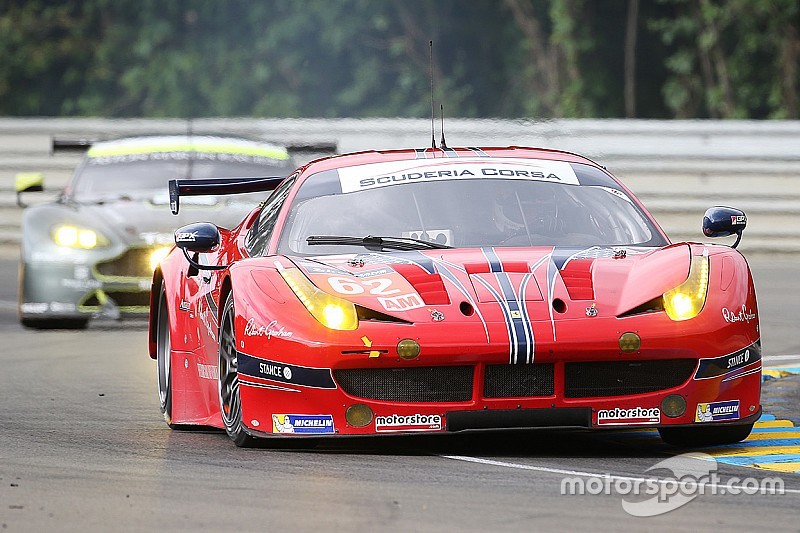 A Ferrari that first raced at Le Mans six years ago won the GTE Am class with a team that had only ever raced there once before. But, as Charles Bradley learns, this fairytale story almost didn’t work out…

As Jeff Segal, Townsend Bell and Bill Sweedler drank in the champagne and heady atmosphere on the podium of the Le Mans 24 Hours, as thousands of fans below them cheered on, there was a tinge of relief as well as celebration.

Their Scuderia Corsa Ferrari 458 Italia had just won the GTE Am class at Le Mans by three minutes, ahead of the AF Corse entry. But nobody has a ‘perfect’ 24-hour race. The key is minimising mistakes, while keeping up a rapid pace for the duration.

And, if you’re going to win, you’d better not go a lap down. There are no wave-arounds there, and its unique triple safety-car system brings its own perils.

US-based Ferrari squad – sponsored by Amalgam and Motorstore.com, two companies that are part of our Motorsport Network parent company – came into the race on the back of a podium on its debut last year. It retained the same venerable 458 and driver roster, did its homework on the basis of what it learned, and arrived thinking it had a shout of going quicker than before.

Then it rained before the start. Play it safe, was the watchword, start on full wets. How were they to know the safety car would stay out until the track was almost dry?

Suddenly, thanks to that early time loss, you’re prone to getting caught behind the ‘wrong’ safety car, which allows your rivals a huge advantage. But, whatever you do, don’t go a lap down…

“We dug ourselves a massive hole,” admits Segal. “We knew we had pace, so we took a conservative option at the start, took the full wet and not the intermediate. We got off that tyre, pitted for inters, and lost a tremendous amount of track position and time.

“Then we got caught behind the third safety car and lost two-thirds of a lap, and we were soon back into the pits for slicks! Trying to be conservative at the start cost us big time, whereas the guys who took a gamble paid a huge dividend.

“In fact, we then went a complete lap down at one point. That was enormous, it doesn’t come back easily. In America, you’d just wait for the next safety car, get the lap back. Not the case at Le Mans – even a best-case scenario gets you a third of a lap back, and that’s quite unlikely. The only choice is making it up by pace.

“I started a lap down on my first stint, and got the lap back – and I think I led on the lap I got out of the car. That was the stint where I said to myself ‘I’m prepared to wreck this thing – if we don’t get this lap back, there’s just no point’.

“It was a nice feeling from going a lap down to P1! It was like ‘now we’ve stopped bleeding’. Stop hitting every kerb in sight, stop taking the frightening passes, stop chopping P1 cars – you can only do that so many times!

“We were able to relax a little, we cooled it, we took care of the car. You find time at Le Mans by using kerbs, but that comes at a risk.

“We had nothing close with the other cars, in fact. Our car was flawless on reliability. We had no extra pitstops or garage time.”

Scuderia Corsa is a regular in the IMSA series in America, but a stranger to European rules, and enlisted help from Kessel Racing and Michelotto for this one-off European adventure.

“For us, this is the oddball race, the one-off,” he says. “The likelihood on getting caught out, regulations-wise, is much higher. The rules here are different to IMSA, and I have to thank our engineer who’s done Le Mans 20 times and won on four occasions now.

“We had our scare in practice, as when you lash the pit-limiter our auxiliary lights turn off so you don’t blind everyone in pitlane. When they switch off, the side-number lights go out. At Le Mans, you can’t go out unless your number-panel lights are on… And you can’t step a millimetre outside the Le Mans rules.”

And how about the car, the old faithful 458 machine?

“I’d venture a guess that our car was the oldest car in the race – and by some margin!” exclaims Segal. “That thing was built in 2011, it first raced as the Hankook car.

“Every other Ferrari [458] is two years old, maybe three. Ours has been around, it’s seen some action!”

As the sun went down at Le Mans, the #62 car’s gameplan began to pay off…

“The three of us were between one and three seconds faster than the leading Proton Porsche from sundown to sun-up,” reckons Segal. “That was where we clawed back and pulled ahead. Then we were back on plan.

“Last year, we analysed what we needed to do to win. It was straightforward: we had a few penalties that were rookie errors on the drivers’ part, we had a few mechanical things that were quite simple.

“We knew what we had to change to fix the errors, and – shockingly – nothing new cropped up. We had a perfect race in that sense.”

Modena-born Scuderia Corsa boss Giacomo Mattioli, who deals in Ferraris out of Beverley Hills and Silicon Valley, relished the success of a lifetime at the most historic and prestigious sportscar race of the them all.

“Amazing, quite amazing,” he says. “We went there last year, and it was the first time for all of us, including the drivers. It was a great learning experience that turned out quite well. This year, we were committed to making a serious attempt to the win.

“Winning is always our goal, but we were quite conscious how difficult that would be. But we knew the car well, and we had that year of experience which made a huge difference.

“Our bar was set very high, we decided to go for it, and the drivers did a fantastic job – we were genuinely quick and very effective. We delivered.

“The crew was impeccable, all the pitstops were great and no penalties.”

Segal runs his own driver simulator business in Miami, GPX Lab. After last year’s podium run, he realised it was a tool that could play a big part in improving their threat for 2016.

“Last year we didn’t underestimate the challenge – but we just didn’t have the pace to compete,” says Segal. “In our best stints we’d maintain our pace to the leaders, but we could never catch them.

“We had a major push for this year. Myself and Townsend improved our speed, but really the big chunk was Bill. His fastest lap was 6.5s faster than last year. His average lap in the race was seconds quicker than his fastest lap of 2015. That was the big difference.

“I forced Bill into my simulator quite a lot, and the thing with Le Mans is it’s not an easy track. The speeds are very high, so mistakes are very high risk. If you crash, there will be knock-on effects – even from the test day.

“You get so little running, because the lap is so long, so if you can get a headstart by working on the areas we were weak, that’s vital. The simulator is a huge part of that – and that’s why factory teams rely on them. Just look at the factory guys, how they hit great laptimes from their first lap. That’s why – they’re great drivers – but they come here armed.

“So we took that into our privateer team’s preparation with both hands. It’s one thing to understand what you’re doing wrong at a corner, it’s another entirely to fix it.

“We were fortunate that we had data from the GTE Pro Ferrari last year, so we had some references to improve our car.”

Letting the emotion sink in

So what does it feel like to stand atop of the podium at the world’s most famous sportscar race?

“It was definitely surreal,” says Segal. “We’ve only done this race twice, and the first time we got on the podium which was remarkable on its own. I’ve done plenty of endurance races, and every one has its own story – something why they didn’t win.

“I’d say, theoretically, our rivals had cars and drivers that were faster. But they had issues; they made mistakes. It’s a 24-hour race, it’s Le Mans.”

Mattioli adds: “The podium at Le Mans is such a special place, it feels like there’s more people down there than there was when the race started! It was really something.

“The passion, the enthusiasm was amazing. I’m not a selfie guy, a strict policy I have, but that was the only place I’d break it!”

Opinion: Could LMP2 be the future of Le Mans one day?