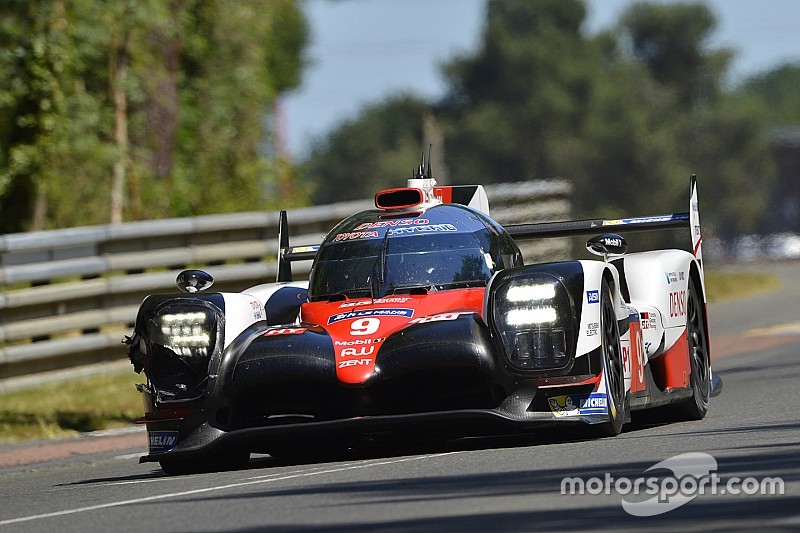 Toyota general manager Hisatake Murata has suggested the Japanese marque’s third Le Mans 24 Hours entry may have been a “waste”.

For the first time since 1999, Toyota fielded three entries at La Sarthe in 2017 in a bid to finally claim the prize that has eluded it, adding an additional TS050 Hybrid to its usual two FIA World Endurance Championship cars.

However, the #9 machine driven by Nicolas Lapierre, Jose Maria Lopez and Yuji Kunimoto failed to finish after being eliminated in a crash with Simon Trummer’s #25 Manor LMP2 car, which hit Lapierre from behind just before the Dunlop chicane.

Lapierre tried to get the car back to the pits with a left-rear puncture and significant damage to that corner of the car, but ultimately stopped on track within sight of the pit entrance.

“The #9 car was a waste, as [Lapierre] was pushing in a place he did not need to push and he was hit from behind,” said Murata. “If that car survived, it would have been able to win.

“It may be that the [new] LMP2s were too fast. Factoring in driver stress, this year’s LMP2s have exceeded the competence of the drivers.”

The demise of the #9 Toyota followed closely on the heels on that of the race-leading #7 car, which suffered a clutch problem as the result of a bizarre pitlane incident in which Kamui Kobayashi mistook LMP2 driver Vincent Capillaire to be a marshal.

Toyota’s remaining car, the #8, had already dropped well out of contention by this stage after spending two hours in the garage to replace a front motor and battery, and went on to finish eighth overall.

“There were a lot of cars going off track, so many yellow flags and slow zones,” added Murata. “We do not do many tests [with slow zones], so it’s possible something is going on.”

Toyota’s latest Le Mans disappointment followed its now-infamous final lap failure in 2016, when the team didn’t enjoy the same outright pace advantage it had in 2017.

Kobayashi led an all-Toyota front row in qualifying after his record-breaking pole lap, and the #7 crew had established a lead of a minute before its race-ending clutch problem.

Murata concluded: “My regret last year is that we believed we might be able to win if all went well, whereas this year we did not win even though we knew we had a car that could.”