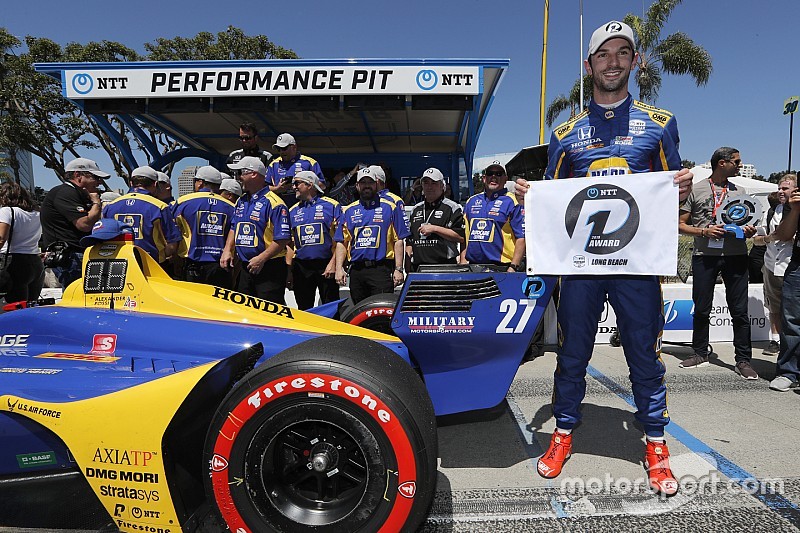 Alexander Rossi delivered a brilliant qualifying lap to score his second consecutive Long Beach IndyCar pole by over a quarter of a second to beat Scott Dixon, the three Team Penske-Chevrolets and Graham Rahal.

Andretti Autosport-Honda driver Rossi lapped the 1.968-mile course in 66.481s, at an average speed of 106.569mph, to beat Dixon by 0.2668sec. The Chip Ganassi Racing driver appeared to be on a faster run but abandoned his effort at Turn 9.

Will Power, despite struggling through practice, conjured up a time – albeit 0.4sec off pole – good enough to beat Penske teammates Josef Newgarden and Simon Pagenaud, as well as Rahal's Rahal Letterman Lanigan Racing-Honda.

Ryan Hunter-Reay (Andretti Autosport) was the surprise exclusion at the end of Q2 as he tried to advance using scuffed alternate compound Firestones to save himself a new set for the Firestone Fast Six. He will start alongside Barber Motorsports Park winner Takuma Sato in the second RLLR-Honda, who tried the exact same tactic.

Ganassi’s second car, that of Felix Rosenqvist, blew his chances of making it into the Firestone Fast Six, having just claimed second-fastest time during Q2. He locked up under braking at the end of the back straight, and skidded down the escape road where he thumped into a tire barrier, bringing out the red flags. He lost his two fastest times and will start 12th.

Tony Kanaan shunted at Turn 6 during Q1 Group 1, just after using an early switch to red alternate tires to lift his AJ Foyt Racing-Chevy into the top six to advance to Q2. The inevitable red flag that followed cost him his best times, but also occurred late enough in the segment that it killed off the chances of those who hadn’t yet set a time on alternate Firestones.

These included both Arrow Schmidt Peterson Motorsports-Honda drivers, James Hinchcliffe and Marcus Ericsson, as well as Santino Ferrucci in the Dale Coyne Racing-Honda and Ed Jones in the Ed Carpenter Racing-Chevy.

Brown: McLaren full-time IndyCar return more “when” than “if”