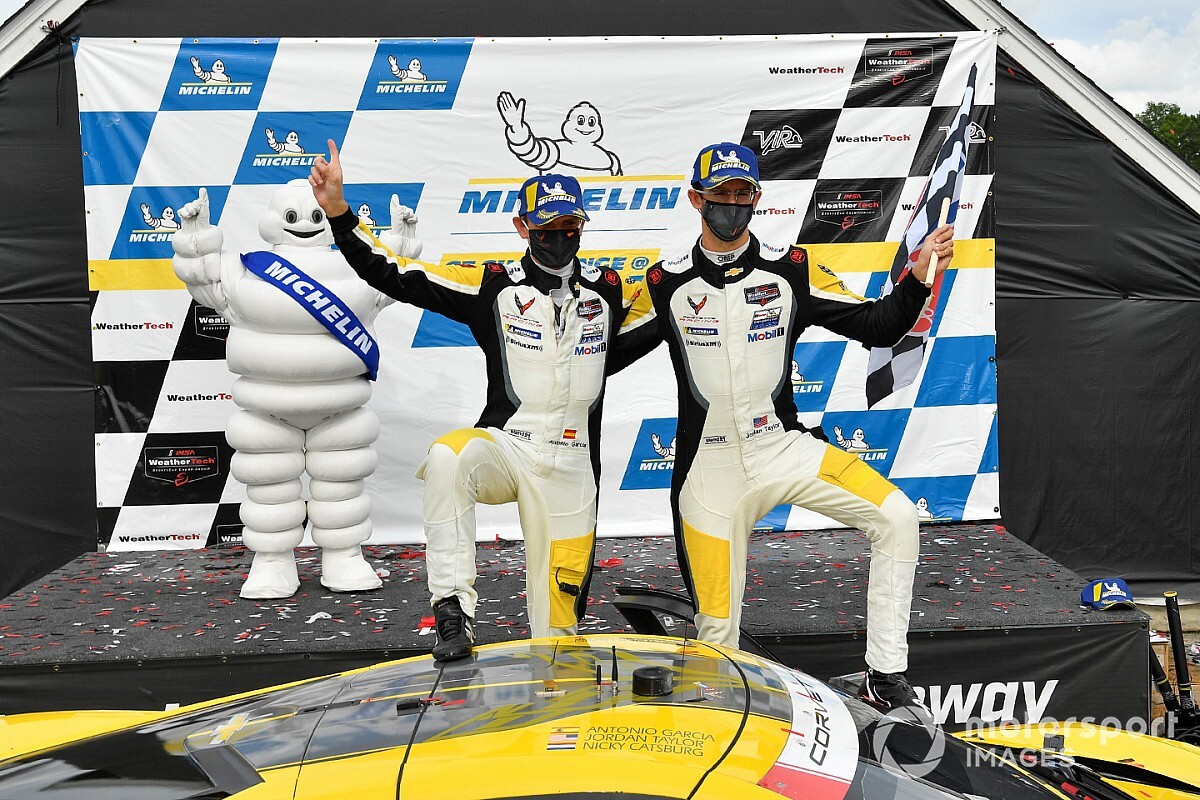 Antonio Garcia and Jordan Taylor won an incident-packed, GT-only round of the IMSA WeatherTech Sportscar Championship at VIRginia International Raceway for Corvette Racing, as Robby Foley/Bill Auberlen triumphed for BMW in the GT Daytona class.

All six of the GT Le Mans contenders ran into problems of one kind or another, and the #911 Porsche of Frederic Makowiecki and Nick Tandy looked set for victory until it was forced to pit with its second damaged tire of the race with just 18 minutes remaining.

Makowiecki led away following a very tardy rolling start, as the sister #912 of Laurens Vanthoor was jumped by an aggressive Connor de Phillippi’s BMW into the Turn 1 Horse Shoe bend. The sister BMW of John Edwards also biffed its way past the #3 Corvette to fourth.

After a brief yellow to retrieve a diveplane from Turn 1, after Frankie Montecalvo’s GTD Lexus was hit by the Lamborghini of Madison Snow, the Porsche 1-2 was restored when Vanthoor repassed de Phillippi at Turn 4.

As both Corvettes passed the BMWs, there was more drama as leader Makowiecki's #911 car suffered a left-rear puncture and was forced to crawl into the pits. That promoted Vanthoor to the front, ahead of the Corvettes and BMWs.

The #24 BMW was forced into the pits with steering problems with 35mins on the clock. Edwards was sent back out on track, but the car refused to turn left and quickly stranded him in the wet grass. That coincided with Till Bechtolsheimer walling his Gradient Racing Acura NSX GT3 at Turn 3.

Under the resulting yellow, Makowiecki pitted for fuel only and retook the lead, while the #3 Corvette suffered a pitstop snafu, dropping it to fifth. Earl Bamber took over #912 from Vanthoor, and toiled to fend off de Phillippi. Another yellow was required soon after when Rob Ferriol hit the tires in his Audi R8 LMS.

De Phillippi mugged Bamber at the next restart, grabbing second after some contact, and then attacked the lead 911 RSR. Oliver Gavin lost fourth place in the #4 Corvette as he clipped the grass and went for a ride at the final corner.

The #912 then suffered an unscheduled stop, as Bamber pitted for a new rear-end bodywork section after the clash with de Phillippi. He was in again a few laps later, with his diffuser hanging loose, and IMSA officials wouldn’t let him rejoin with the #911’s number on the rear bodywork either. He rejoined three laps down.

De Phillippi threw away his hard-earned second when he spun, handing that spot to Jordan Taylor’s #3 Corvette – which ultimately put the ’Vette in a winning position.

With just 18 minutes to go, Tandy pitted the #911 from the lead with a damaged left-rear tire, which allowed Garcia to inherit the lead in the Corvette, ahead of the de Phillippi/Bruno Spengler BMW, with the #911 Porsche rejoining in third. Tandy charged after Spengler, catching him on the final lap but he then got mired in GTD traffic so he couldn't get past him.

The #3 also had a late scare, as its diffuser came loose and flapped around in the high-speed sections. Tommy Milner trailed home in a distant fourth in the second Corvette.

In a pulsating GTD class battle, Foley’s Turner Motorsports BMW M6 GT3 led the opening stint after the pole-sitting McLaren of Corey Fergus made an awful start, which promoted the Acura NSX of Matt McMurry to second.

Strategy came into play during the second yellow, with some cars opting not to pit, but Foley soon battled his way back to the lead. Behind him, McMurry and Snow battled hard for second.

Snow won that battle, then chased down Foley. The final pitstops and driver changes to the pros put Auberlen, in for Foley in the M6, out front. Mario Farnbacher was right on his tail, having taken over the NSX from McMurry, and Bryan Sellers (in for Snow) held third.

But Farnbacher ruined his chances of winning when he outbraked himself trying to pass Auberlen, and fell to fourth.

As Auberlen pulled well clear, the battle for second intensified with Sellers under pressure from Lawson Aschenbach (Mercedes) and the recovering Farnbacher.

Farnbacher pulled off a committed, high-speed move to pass Aschenbach for third with 10 minutes to go. Sellers looked to have second sealed, but a charging Tandy pushed him wide on a corner, so an opportunistic Farnbacher jumped past to grab second on the last lap.

This was Auberlen’s 61st victory in IMSA, breaking Scott Pruett’s record that he had equalled at Petit Le Mans last year.

UPDATE: The Snow/Sellers Lamborghini was stripped of its third-place GTD finish when a fuel capacity infringement was discovered in post-race tech inspection.

Gutted Makowiecki laments "the saddest podium of my career"