Helio Castroneves set the pace aboard Team Penske's Acura DPi in second practice for this weekend's Rolex 24 at Daytona. 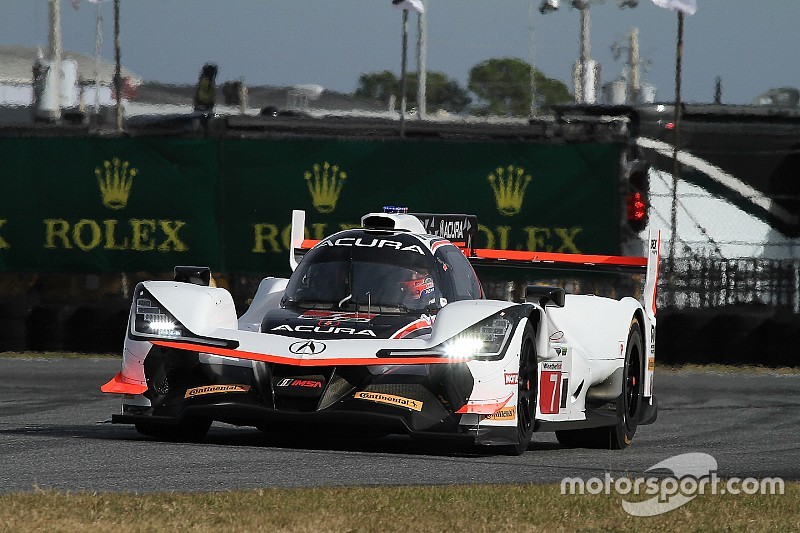 Following a low-key first practice for both Penske Acura ARX-05s, three-time Indianapolis 500 winner Castroneves moved the #7 car to the top of the times 25 minutes into the one-hour session with a 1m37.283s.

The Brazilian later improved to a 1m37.036s, ending FP2 four tenths up on the best time produced by Mazda Team Joest driver Rene Rast in the opening session.

Second-fastest was Nicolas Lapierre in the #22 ESM Nissan DPi, the Frenchman setting a 1m37.360s amid a late flurry of improvements prior to the red flag being shown with five minutes remaining.

Filipe Albuquerque was the quickest of the Cadillac drivers in the #5 Action Express car, 0.025s down on Lapierre, while best of the LMP2s was the #54 CORE autosport Oreca driven by Colin Braun in fourth.

After topping the first session, Mazda was fifth-fastest courtesy of Jonathan Bomarito in the #55 car, ahead of defending race winner Jordan Taylor in the #10 Wayne Taylor Racing Cadillac.

The two United cars were split by the #37 Jackie Chan DC Racing Oreca of Robin Frijns.

Porsche led the way in the GT Le Mans class as Patrick Pilet put the #911 entry on top in the latter stages of the session with a 1m43.902s, edging out Jan Magnussen's #3 Corvette by 0.068s.

The two Ford GTs led the way for much of the running, but were demoted to third and fourth places, with Richard Westbrook giving the Ganassi team a best time of 1m44.057s in the #67 car.

Scott Pruett reflects on legendary career ahead of final Rolex 24