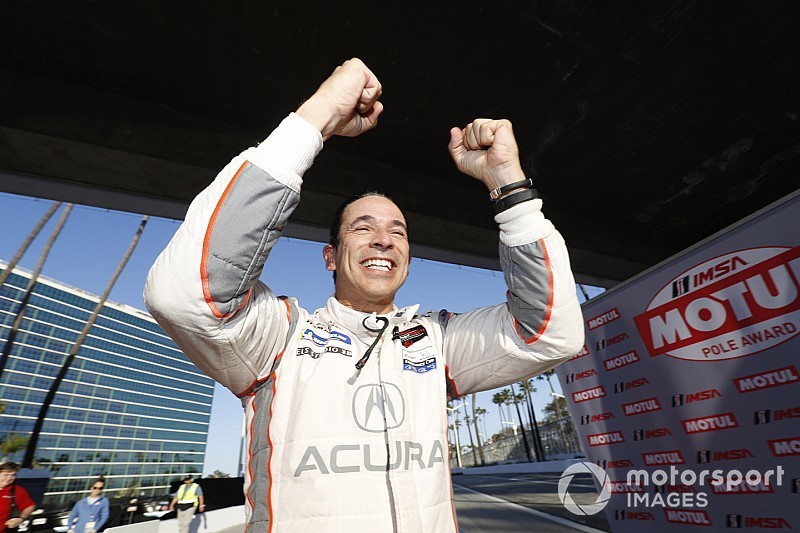 Castroneves, a four-time IndyCar Long Beach polesitter, was over 0.2sec faster than his closest opposition, the Action Express Racing Cadillac DPi-V.R of Felipe Nasr, in the #7 Acura ARX-05.

That was over half a second quicker than his third-placed teammate Juan Pablo Montoya, who took pole for this event last year.

Joao Barbosa made a late improvement to slot the second AXR Cadillac into fourth place.

Jonathan Bomarito appeared to have a chance of taking pole but understeered his #55 Mazda RT24-P into the tires exiting Turn 6 after clipping the inside wall, although he remained over a quarter-second faster than teammate Tristan Nunez.

Jordan Taylor, who had his appendix removed earlier this week and for whom Kamui Kobayashi was on standby as sub, was a brave seventh fastest in the Wayne Taylor Racing Cadillac ahead of the similar cars of JDC-Miller and Juncos Racing.

In GT Le Mans, Nick Tandy produced a 1min16.313sec in the #911 Porsche 911 RSR to win pole, just 0.064sec ahead of teammate Laurens Vanthoor, who made a slight mistake on his final flying lap when he appeared to be heading for P1.

Corvette Racing’s Oliver Gavin was 0.2sec behind in third, beating IndyCar ace Sebastien Bourdais in the #66 Ford GT, the Frenchman subbing for the unwell Joey Hand.

Antonio Garcia slotted the second Corvette into fifth ahead of Ford fulltimer Ryan Briscoe in the #67 Ford, while the two BMW M8 GTEs of Tom Blomqvist and John Edwards brought up the rear.