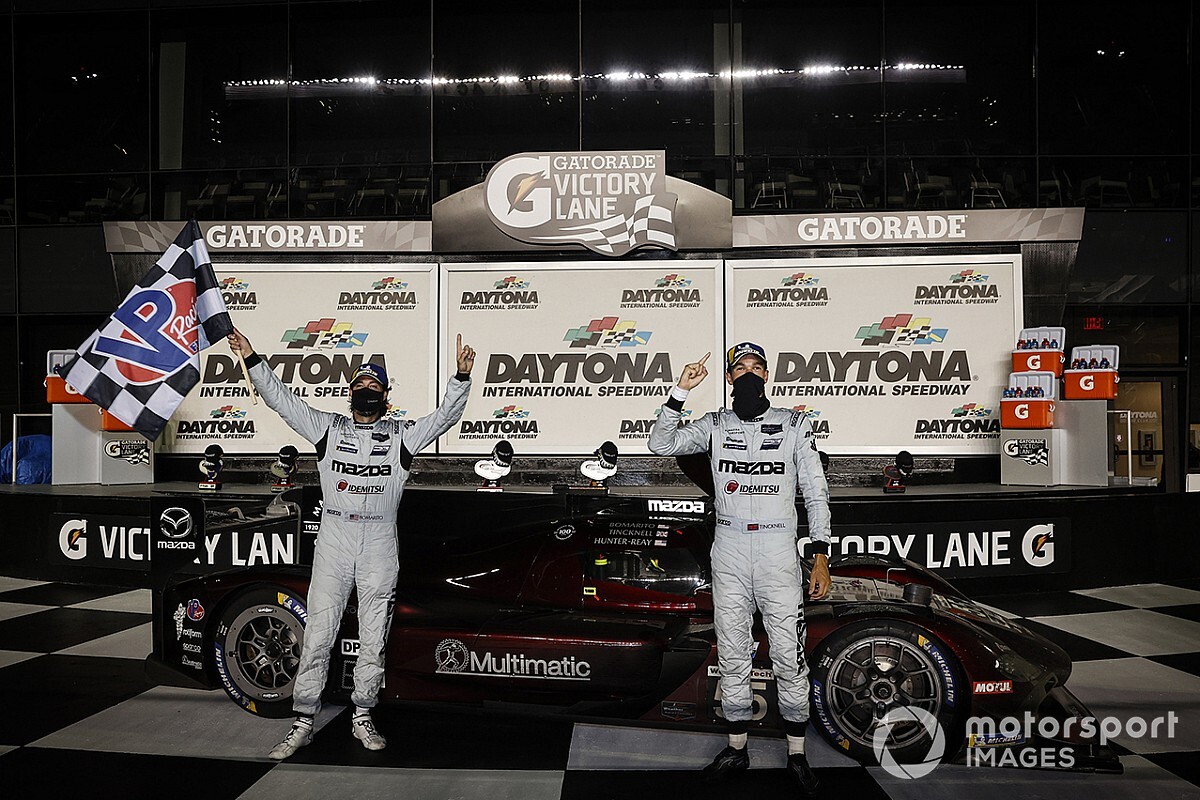 Harry Tincknell and Jonathan Bomarito led Oliver Jarvis and Tristan Nunez in a 1-2 finish for the Multimatic-run Mazda RT24-Ps in the second round of the IMSA WeatherTech SportsCar Championship at Daytona, while in GTLM, Corvette Racing finally scored its 100th win in North America and the AIM Vasser-Sullivan Lexus RC Fs dominated the GTD class.

Polesitter Helio Castroneves had no issues holding off Jarvis’s Mazda at the start, with Juan Pablo Montoya driving the second Acura around the outside of Bomarito’s Mazda at the horseshoe corner to grab third. However, Bomarito took just two laps to return the favor. Chris Miller led his JDC-Miller teammate Joao Barbosa and Gabby Chaves in the Action Express Racing Cadillac.

Montoya and Castroneves stopped on Laps 5 and 7 respectively to change from wet tires to slicks, leaving Bomarito up front, just ahead of teammate Jarvis who he had just passed. The two Mazdas then switched to slicks, but the four turbocharged cars were now behind the two Cadillacs of Chaves (AXR) and Ryan Briscoe (Wayne Taylor Racing) who had been brave enough to start on slicks.

On Lap 16, it was clear that Castroneves was struggling, losing time to the charging Montoya and then being passed by Bomarito and Jarvis. Up front, Chaves was still edging away from Briscoe to the tune of 17sec, while Montoya was now 11sec behind the WTR Caddy. When those Cadillacs pitted just before the 40min mark – Briscoe stayed on board for WTR, but Pipo Derani took over from Chaves – Montoya’s Acura took the lead.

Montoya was now being hunted down by the battling Mazdas of Bomarito and Jarvis, however, and after 45mins this trio appeared tied together. At the 50min mark, Montoya dropped down into pitlane for fuel and tires, but remained on board. So too did Castroneves in the #7 Acura and, a lap later, Bomarito in the #55 Mazda.

Jarvis left it until the 55th minute to pit the #77 Mazda and hand over to Nunez, but both Bomarito and Montoya were able to stay ahead, and soon caught up with Briscoe. The WTR Cadillac ceded second to Bomarito on Lap 33, and then the Mazda set about trying to close down the 14sec gap to leader Derani.

Just before half-distance the struggling #7 Acura headed into the pits and then the paddock, apparently with an engine issue, and at exactly half-distance Derani pitted from the lead to hand P1 to Bomarito who had been tailing him by less than one second.

The #55 Mazda at this point was 10sec ahead of Montoya whose mirrors were now full of the other Mazda piloted by Nunez. Briscoe had also stopped and passed the WTR driving duties to Renger van der Zande. These prototype position shifts promoted Sebastien Bourdais in the #5 JDC-Miller car to fourth, 36sec off the lead.

Montoya and Nunez pitted from second and third on Lap 52, the Colombian handing over to Dane Cameron, and Nunez handing the #77 back to Jarvis. A lap later, Bomarito stopped to give the leading Mazda to Tincknell, and the #55’s advantage was such that the Briton was able to retain the lead. Jarvis, meanwhile, emerged from the pits behind Cameron but took barely more than a lap to dispose of the Acura and home in on second-placed Derani.

This pair battled side-by-side for half a lap but the Mazda’s straightline speed made the Cadillac easy meat on the banking and so with an hour remaining it was a Mazda 1-2, the pair running 6.7sec apart. Fifteen minutes later, Tincknell appeared to be able to absorb everything teammate Jarvis threw at him, their difference varying between just under six seconds and just under nine.

The pair of Mazdas were 16sec ahead of Derani's AXR Cadillac who was coming increasing pressure from Cameron's Acura, while Bourdais in fifth kept closing the gap ahead.

The final scheduled stops, with around half an hour to go, left Tincknell 13sec ahead of Jarvis, but more remarkable was that Bourdais had jumped both Cameron and Derani to grab third.

And that’s how it stayed to the end, Jarvis occasionally gaining, occasionally losing out to his teammate, depending on traffic. In truth it was a masterful performance by both, and Tincknell’s teammate Bomarito.

Porsche’s Nick Tandy, being the only driver to start the race on wet tires, made mincemeat of his GTLM rivals right from the drop of the green flag and actually moved into seventh overall as he pulled a 17sec lead in just three laps. However, teammate Laurens Vanthoor in the #912 Porsche and Jesse Krohn in the #24 BMW – who switched position on Lap 3 – were in the catbird seat when Tandy pitted on Lap 5 to grab slicks.

The Corvette C8.Rs had dropped to the back of the class in the worst conditions, but Oliver Gavin and Jordan Taylor moved up to second and third as the track dried, chasing down Bruno Spengler who was up front in the #25 BMW.

With 45mins down, while Gavin ran only 2.5sec behind Spengler, Taylor had dropped back behind Vanthoor’s Porsche. Spengler pitted after 50mins, and handed over to Connor de Phillippi, leaving polesitter Gavin out front for Corvette for just a lap before he and Vanthoor’s Porsche headed for the pits. Each ceded the cockpit to his teammate, Tommy Milner taking over the #4 Corvette, Earl Bamber driving the #912 Porsche.

That put Tandy into the lead ahead of the BMWs of Krohn and de Phillippi but Tandy pitted to hand over to Frederic Makowiecki at 64mins. That dropped the #911 to the back of the class behind Milner, Bamber and the #3 Corvette now piloted by Antonio Garcia.

Just past half-distance, Krohn stopped for a second time to give his BMW to John Edwards, allowing Milner into second, albeit 16sec behind the other BMW of de Phillippi. When de Phillippi stopped, he was able to emerge ahead of Edwards.

The BMWs were back up front once Makowiecki stopped with 42mins to go, but when RLL serviced their cars for the final time, it was Garcia’s Corvette followed 2sec behind by Bamber’s Porsche; then 17sec further back Milner’s Corvette ran 4sec ahead of Makowiecki’s Porsche. The only one of this quartet who might be struggling to eke out his fuel to the end was Milner. His trials weren’t over yet, either, because he lost fourth to de Phillippi’s BMW with seven minutes to go.

Sure enough, with 15mins to go the #4 Corvette fell behind the #911 Porsche. Meanwhile Garcia in the #3 C8.R was by no means in a comfortable position, as Bamber was sometimes whittling his deficit as low as 1sec.

However, Garcia showed he was in control by slamming in the fastest GTLM lap of the race in the final five minutes, eventually passing the checkered flag 2sec ahead of Bamber's Porsche, to score the 100th win for Corvette Racing on North American soil.

The #911 Porsche (Tandy/Makowiecki) completed the podium in third ahead of the #25 BMW (Spengler/de Phillippi), the #4 Corvette (Gavin/Milner) and the #24 BMW (Krohn/Edwards).

With Compass Racing failing to reach the parade grid on time, the McLaren was forced to start at the back, allowing Aaron Telitz’s Lexus RC F GT3 to start from pole with Robby Foley in the Turner Motorsports BMW M6 GT3 alongside.

Telitz leapt into the lead at the start, and while Frankie Montecalvo in the second Lexus had to initially concede best to John Potter’s wet tire-shod GRT Magnus Lamborghini, the latter couldn’t make his tires last and had to pit, leaving the two AIM Vasser Sullivan-run cars running 1-2 ahead of Misha Goihkberg’s Acura NSX GT3, Foley’s BMW and Matt McMurry’s NSX.

Following the round of scheduled stops, Jack Hawksworth and Townsend Bell took over the Lexus RC Fs, 9sec apart, while Bill Auberlen was a further 9sec down having taken over the Turner BMW from Foley. A similar distance behind him was Alvaro Parente now in the #86 Acura ahead of Toni Vilander’s Scuderia Corsa Ferrari.

Sadly, however, the BMW was suffering a fuel-pick up issue and planned to make one more stop and they had the double whammy of picking up a puncture, dropping Auberlen out of contention. That allowed Mario Farnbacher and Parente to move their Acuras into third and fourth, tied together but 13sec behind Bell’s Lexus which ran a similar distance behind teammate Hawksworth.

The final pitstop halved the gap between the Lexus pair, but Hawksworth and Bell maintained team formation, and never looked threatened by the chasing Acuras.

Vilander clinched fifth for Scuderia Corsa, while Lawson Aschenbach was a lapped sixth after making a desperate late splash-n-dash in the Riley Motorsports Mercedes-AMG GT3.