Tincknell thrilled to win 30 years on from Mazda's LM24 victory

Harry Tincknell was thrilled to clinch Watkins Glen 6 Hours victory for Mazda on the 30th anniversary of the marque’s surprise triumph in the 24 Hours of Le Mans.

Tincknell, fulltime teammate Oliver Jarvis and Jonathan Bomarito initially struggled with rear-end grip in the #55 Mazda RT24-P, as the Multimatic-run squad returned to the scene of the car’s first ever IMSA WeatherTech SportsCar Championship triumph two years ago.

However, the car looked increasingly strong in the second half of the race, as the track got more and more grippy and dominant Acura ARX-05 of Meyer Shank Racing and the second Acura of Wayne Taylor Racing started to look less outstanding, and the #31 Action Express Racing Cadillac received a drive-through penalty for blowing the pitlane speed limit.

Following a big shunt for the Tower Motorsports LMP2 car of Gabriel Aubry, there was a long caution period during which all the leading runners made a last pitstop. But Mazda strategist Leena Gade chose to make theirs a shorter stop by leaving Tincknell on his current set of tires and jump the RT24-P to the front of the pack.

Following the final restart with 37mins to go, Tincknell sprinted away from Olivier Pla in the MSR Acura, his lead reaching 3sec at one point, but then the Briton needed to save fuel – not easy on worn tires as it requires carrying so much speed off-throttle on corner entry, while still making sure the Prototype can lap the GT runners and LMP2/3 runners.

Such was the fine margin on fuel that Tincknell ran out of fuel on the slowdown lap.

He told NBCSN: “I have a great team behind me and they were just giving me the numbers on the radio, and they kept coming down to the point where I was like, ‘Oh my goodness, this is crazy.’ I was lifting halfway down straights to make it around corners where I was braking [before]. I was able to just lift off, and then go flat again.

“It was an incredible team effort. They said on the last lap, ‘You’ve got enough fuel to make it to the finish line.’ They were correct on that but they forgot about the in-lap, so the car’s still out on track!

“But an unbelievable job by Mazda. Thirty years ago this week they won Le Mans, 1991. So 30 years on to get another victory here where this program really took off in 2019 is absolutely fantastic.”

Jarvis added: “We knew the numbers, we told him what to hit and knew he could do it. The pace was incredible with the amount of fuel-save. Thankfully, everyone had to save so it was a real battle to the end.

“It’s just been amazing weekend. It’s great to have JB [Bomarito] back with us, Harry’s done an amazing job, and this was a real team effort. You know, we won here in 2019, and probably had the quickest car comfortably. This time I think it’s been very close among all the manufacturers. So to come away with a win, it’s a special one.

“Really, it’s been a good year so far, but we said we needed to put wins on the board if we’re going run for the championship. That’s what we’ve done.”

Tincknell and Jarvis now lie 31 points off the points lead established by WTR’s Ricky Taylor and Filip Albuquerque, but ahead of AXR Cadillac and MSR Acura. 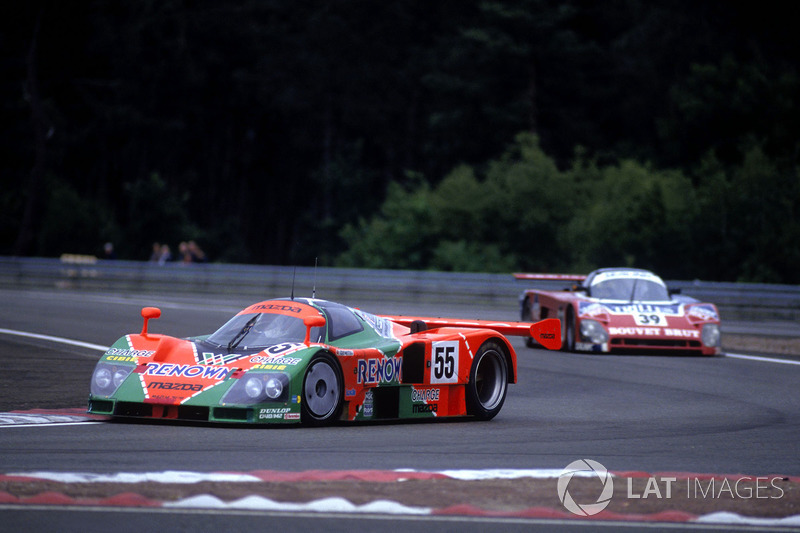 The Mazda 787B of Volker Weidler, Johnny Herbert and Bertrand Gachot heads to victory at Le Mans in 1991.

Bomarito to join Thomas at PR1/Mathiasen