Bill Auberlen was in reflective mood after clinching his record-equaling 60th IMSA victory, along with Robby Foley and Dillon Machavern, when the Turner Motorsport BMW M6 passed the Riley Motorsports Mercedes AMG GT3 on the final lap of Saturday’s Motul Petit Le Mans.

A technical infraction in qualifying saw the Turner car sent to the back of the 12-car field of GTD machinery, but Foley swiftly carved through to fourth in the opening stint. He and fellow fulltimer Auberlen – along with endurance race partner Machavern – spent the remainder of the race in contention for the win along with the Riley Mercedes of Jeroen Bleekemolen, Ben Keating and Felipe Fraga, and the Montaplast by Land Motorsport Audi R8 of Christopher Mies, Ricky Feller and Daniel Morad. However, there were also occasional threats, depending on the unpredictability of full-course cautions, from Pfaff Motorsports’ Porsche 911 RSR and the Ferrari 488 of Scuderia Corsa.

In the final-stint shootout, however, the battle came down to Turner vs Riley, Auberlen vs Fraga, and on the last lap, under intense pressure from Auberlen, the Mercedes driver ran wide in the Esses and out of fuel, having made his last stop seven minutes before the BMW.

"I'm so glad BMW still sees I can get it done," said 51-year-old Auberlen. "To tie 60 wins with Scott Pruett – it just shows how great a career BMW has allowed me to have, winning in these BMWs day in and day out. Now to be tied with the most wins in America…

"When you look back, you get to see how many unique wins there have been. When I look at my trophy case and I get to add this to it, all of it is a bunch of great memories. I'll never forget all the joy it brings and the camaraderie. Every single weekend you go to battle with a group of guys who would die for you and you would die for them.

“You come with everything you have, and to get to do that with BMW for 23 years now, it has been a great road that I wouldn't trade for anything. "

Machavern paid tribute, stating: “My stints were fairly uneventful if you can believe that. My job as the third driver here is just to keep everything straight, keep the wheels on it and just cruise around and take it home. It was really exciting to watch Robby cut through the field at the beginning of the race. It really gave me some fire to hop in the car and just go to work. The Turner guys did an amazing job all weekend, the car was absolutely perfect.

“Really this race is all about the man sitting center stage [Auberlen]. Breaking records, that drive at the end… It was unbelievable. You couldn’t have written that any better with the last lap pass. Everything falling into place with the fuel save, the yellow. It was incredible to watch. I’m really happy that the guys at Turner Motorsport let me be the third driver and take part in this awesome experience.”

The victory lifted the Turner drivers to joint second place in the championship along with Zacharie Robichon of Pfaff Motorsports who finished third in the race sharing the #9 Porsche with Scott Hargrove and Lars Kern.

Mario Farnbacher and Trent Hindman of Meyer Shank Racing won the GTD title just by starting the race – fortunate, given that their Acura NSX was forced to retire with a holed radiator that caused the engine to overheat.

Explaining Riley Motorsports’ Mercedes running out of fuel, Keating stated: “Because we were racing to the eight-hour mark, we were really short on fuel for the last two hours. We can only go 53 minutes on a tank of fuel, but we decided to risk it and try to make it to the end when a caution came out with 30 minutes to go. We did make it to 10 hours, but still had to go another lap and a half extra because of how the overall leader caught the timing stand. We didn’t have that much fuel. We had enough fuel to get to Turn 5.” 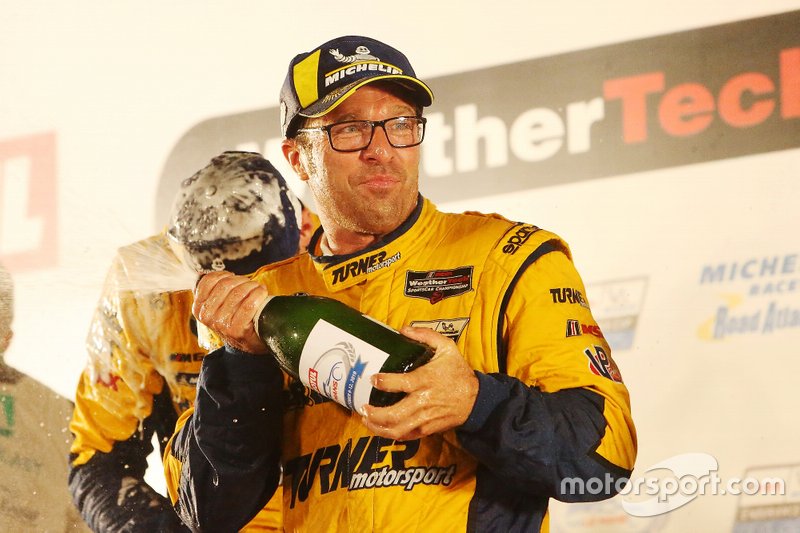 Ricky Taylor has zero worries over the pace of the new Acura ARX-06, but believes the new GTP cars will encounter several sensor issues over the course of the Rolex 24 Hours at Daytona,